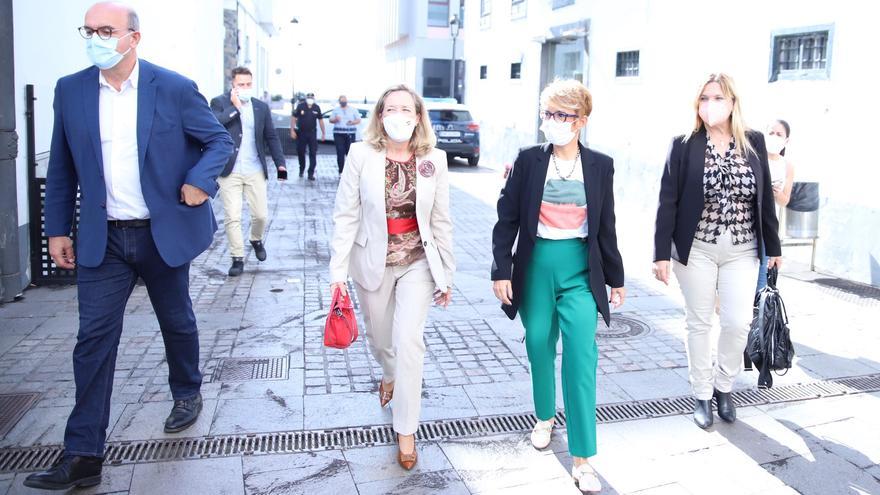 The Vice President of the Government and Minister of Economic Affairs and Digital Transformation, Nadia calviño, has advanced this Monday that the Executive is recalculating the impact of the La Palma eruption in the technological ring of the island and prepares about 40 million euros for enhance the optical connectivity of the Instituto de Astrofísica de Canarias (IAC) on La Palma.

Calviño hopes that the investment can begin to be deployed this year 2021 so that the island, and also the entire Canary Islands, is configured as a ‘hub’ of connectivity between continents, improving the connection with the submarine and terrestrial cable.

The minister stressed that the Executive is involved “100%” in addressing the “cataclysm” that the volcanic eruption on the island has entailed, with “hard times”, but at the same time it works, hand in hand with the Government of the Canary Islands and the Cabildo, in taking measures so that “there is a future.”

For this reason, he commented that the three administrations are working to “identify emblematic projects” on the island that help to achieve the diversification of the economy through the investment of European funds, and in that sense, he has also highlighted the interest in the archipelago becomes an audiovisual hub.

Calviño, who this afternoon meets with a representation of businessmen affected by the eruption, has also detailed that at the end of the week the Insurance Consortium will pay 6.5 million to the victims, with a total of 611 compensation, 500 of them corresponding to homes.

Likewise, he has commented that 152 companies on the island have taken advantage of the specific ERTEs prepared by the Government, with 758 workers.

The minister has taken advantage of her appearance before the media to reel off the government’s aid to the island, which includes an emergency 10.5 million for the acquisition of household goods and homes – the first ones are delivered this week – and a plan reconstruction of more than 200 million, whose initial deployment will depend on the needs.

In addition, he has commented that the General State Budgets (PGE) include some 900 million in investments for the islands related to infrastructures, R&D, education or health, among others, both with their own and community resources.

He said that this Tuesday there will be a technical meeting to begin to set the criteria for the island’s employment plan, endowed with 63 million, and also defended another item of 40 million to restore degraded environments and 5 million for social services.

The minister insisted that a “joint response” must be given from all administrations to the needs of La Palma and said that it is necessary to work on generating opportunities for the future, especially “for the youngest.”

Máñez has highlighted the “commitment” of the central government to La Palma “from minute one”, both with the opening of economic lines and “being on the ground, knowing and feeling reality”, because that is how “magnitude is understood ” of the problem.

He said that the island is still in an emergency phase but the institutions already have “their sights set on reconstruction” and with a joint effort, although an exact assessment of the damage caused by the volcano cannot yet be made.

Máñez has highlighted the “exemplary” of La Palma tree society before a volcano “that drags everything” and sees key that the employment plan is successful and the future requalification of the beneficiaries thinking about the “new opportunities” that will open in the Island.

Raquel Díaz has also valued the support of the central government “from the first minute” to deal with the emergency and launch the recovery plan since there are many companies with the activity “paralyzed” and in all sectors.

Along these lines, he has indicated that the Government “has been agile” in processing the specific ERTEs for La Palma because “the sector needed it” and they are “the best way” to alleviate this “unforeseen situation”.

Give back to La Palma “the future it had”

He pointed out that the reconstruction of La Palma is a “challenge of great magnitude” because “it is necessary to work on many fronts”, one of them in the digital transformation because it will allow to promote economic diversification “and come out stronger in the event of any emergency”, incorporating technology to all sectors.

Regarding the employment plan, he said that it is important to “work in a coordinated manner” between administrations because “it is an important economic injection for the island”, to which it is necessary to return “the future it had.”

Díaz stressed that 2020 was a “very complicated” year on the island due to the impact of the health pandemic and when the start of the economic recovery is already expected, the volcano “has hit the water line for companies.”

As an example, he has given the industrial park of Callejón de La Gata, in Los Llanos de Aridane, which “is buried by lava”, to which a primary sector affected in the Aridane Valley and commerce and hospitality with “concern and uncertainty”.

The counselor has specified that the economy on La Palma “is very transversal” and the eruption affects the entire territory for which she has thanked the “unconditional support” of the rest of the administrations in order to “not leave anyone alone”.