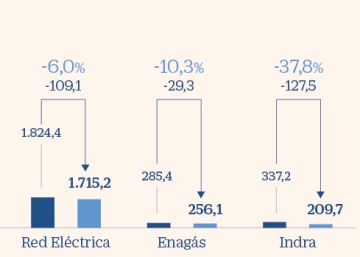 Obtaining resources with which to pay for the measures implemented to face the deterioration of the economy and finance the deficit is one of the Government’s priority objectives. In addition to the funds coming from the EU and the increase in debt issues throughout the year, there are many who look askance at the contribution to the public coffers derived from the State’s participation in the shareholding of some of the private companies of the country. However, unlike in previous years, this year the market shock is preventing the State from achieving latent capital gains due to its presence in the capital of listed companies.

The portfolio of stocks that the State keeps under control is not spared from losses on the Stock Market. Investment through entities such as the Fund for Orderly Bank Restructuring (FROB), the State Company for Industrial Participations (SEPI) or Enaire stands at 18,638.25 million euros, 7,510.59 million less than at the beginning of the year. In other words, so far in 2020, a period in which global equities have been strongly shaken by the coronavirus crisis, the state-owned stock portfolio accumulates a loss of 29.7%. But if the declines in the Stock Market were not enough, the changes in the shareholder remuneration policy have resulted in lower income for the public coffers. The cancellation or, in the best of the cases, the cut of the dividends distributed by these companies lead the State to pay 2,181 million less than initially foreseen.

Aena and Airbus, two of the crown jewels and responsible for the bulk of the profits achieved by the State in 2019, are today the two listed companies that remain the most from the portfolio of shares in the hands of the Government. The State, through Enaire, continues to be the main shareholder of the airport manager that owns 51% of the company’s securities. Half of the public stock market equity is in Aena (8,499 million euros) and, although in past years the increases in the stock market registered by the listed company served to offset the losses of other investments, this year the paralysis of air traffic has stopped feel strongly in its results and evolution in the Stock Market. The falls registered by Aena translate into a loss of more than 4,398.75 million for the State. Along with this, the public coffers will stop receiving 580 million in dividend after the airport manager announced this year that it canceled the coupon of 1,137 million with a charge to the results of 20 to strengthen its solvency.

The aircraft manufacturer joins the list of companies that have paid their dividends and, as in the case of Aena, as a result of this decision, the State will no longer receive 58.8 million for 4.2% of the capital that continues to control the SEPI from Airbus. With a fall of 50.8% in the year, public investment in the company has gone from 4,286.16 million at the close of 2019 to 2,108.82 million today.

Another of the treasures of the State is its participation in Bankia. Although it has been undoing its presence in the capital of the entity, it still holds 61.8% of the shares, a percentage that at market prices is valued at 2,523.57 million. The announcement of the merger with CaixaBank has served to revitalize its price and since last September 3, the session in which the news broke, it has risen by 27.88%, a rise that is still insufficient to say goodbye to losses in the year. So far in 2020, the entity chaired by José Ignacio Goirigolzarri leaves 21.18% in the Stock Market, a decrease that translates into a loss of 685.48 million for the State.

Bankia has also canceled the extraordinary dividend of 2,500 million that it had planned to pay out of the 2020 accounts due to the effects of the pandemic and the recommendation of the ECB to the financial sector not to distribute dividends for now. The State thus remains without another 1,525 million this year.

Public participation in private companies does not stop there. Through SEPI, the State maintains positions in the capital of large companies such as Red Eléctrica (20%), Enagás (5%), Indra (18.78%) and IAG (2.7%) and other smaller companies such as Ebro Foods (10.36%). This presence corresponds mostly to inheritances from the past and in some cases they are considered as strategic sectors.

Although losses are the prevailing trend in a year as bad as the one experienced by the Stock Market in 2020 (the Ibex is down 29.9%), only Ebro ends up reporting a positive result to the state portfolio. In the last nine months, the food company, a defensive firm, has appreciated 7.48% on the stock market. These promotions translate into gains of 218.48 million for the State.

Quite different luck is that of IAG, Indra, Enagás and Red Eléctrica, which accumulate cuts of 77.9%, 10.2% and 5.98% in the stock market so far this year. Among the four, 466.5 million remain from the public portfolio. Above all, IAG stands out (-200.54 million). Although the presence of the State is limited in the airline’s capital, the heavy punishment suffered by the tourism sector explains this result.

113 million. The coronavirus crisis and the paralysis of economic activity in the first months of the year have caused historic losses for large listed companies, a situation that has led many to abolish shareholder remuneration. Enagás and Red Eléctrica are the great exceptions to this trend. Thanks to this, the public coffers will receive 113 million from the dividend from Red Eléctrica – of which SEPI maintains 20% -, which chose to maintain the payment. Enagás also decided to continue with its shareholder remuneration, leaving intact both the planned payment charged to the accounts for 2019 and for 2020. With these two coupons it is expected that the State will enter 76.6 million. The same is not the case with IAG, which April decided to cancel the complementary dividend.