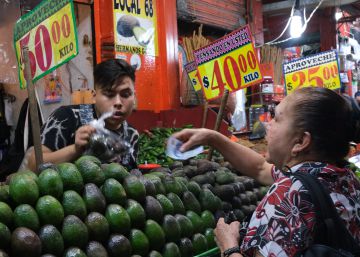 The Mexican economy dodges the recession for the minimum. The GDP of the North American country grew 0.1% in the second quarter of 2019, as reported on Wednesday by the Mexican statistical office (Inegi). The second economy of Latin America was under the threat of entering a recessive stage after registering a 0.2% drop in the first quarter of the year and before the global economy slowed. The data is preliminary, but gives a momentary respite to the Government of Andrés Manuel López Obrador what has been questioned for its economic measures. However, it exhibits a much more worrisome reality for the North American country: a severe stagnation and an economic expansion inferior to its potential and population growth.

The slight growth of the Mexican economy is marked by a 3.4% drop in primary activities, among which is the oil industry, one of the axes of the economic policy of the first Mexican president; as well as a stagnation in secondary activities (manufacturing); and a 0.2% growth in tertiary activities (goods and services). Although the data is positive, most analysts find it very difficult for growth to exceed 1% this year. The International Monetary Fund, for example, a few days ago its growth estimate for 2019 at 0.9%.

In recent weeks, the main analytical houses and financial institutions – JP Morgan, Goldman Sachs, Citibanamex and Oxford Economics, among others – and to the Bank of Mexico they were warning of the "major slowdown, greater than previously believed" that Mexico is going through, in the words of BBVA's chief economist in Mexico, Carlos Serrano. Some analysts had even estimated that the American country would enter into recession, with a fall in GDP for the second consecutive quarter. The North American country has avoided it by the minimum, but the signs of stagnation remain.

López Obrador has stressed in his daily press conference that the growth figure shows that there is a prudent expense in your Government. "With austerity, spending well, you can grow," he said. In addition, he pointed out that the negative estimates of the analysts generate distrust and that the new figure “clears the fear, the intention of creating distrust. We have no doubt, but we insist so much on the recession, because it does lead to creating doubts, some uncertainty. ”

"If our goal is not to go down from zero, we are wrong," he says. Juan Carlos Moreno Brid, professor of the Faculty of Economics of the UNAM. "What you can not do is bet on austerity and think that you will be able to grow at high rates: both are contradictory. It is increasingly clear that a tax reform is needed to increase revenue and thus be able to launch investment plans with high multipliers. And an industrial policy. " The "weak" behavior of the Mexican economy, completes Ignacio Martínez, of the Laboratory of Analysis in Commerce, Economy and Business (Lacen), "largely reflects the contraction of public investment and a gross fixed investment that was reduced by a 2.4% in real terms in April. "

The concern about the health of the economy is not limited, much less, to Mexico. Not even to Latin America. This Wednesday the US Federal Reserve has lowered interest rates by a quarter point – in what is its first expansive movement since the end of the Great Recession – and it is expected that its Brazilian pair has cut the price of money by half a point percentage to try to revive a growth that languishes. On the other side of the Atlantic the messages are also worrisome: Mario Draghi, after bringing the rates to zero zone and even charging the banks for their deposits at the eurozone issuing institute, prepares a final stimulus trade before leave Frankfurt in autumn. "I don't like what I see," he repeated several times in his last public appearance last Thursday.

Although the slowdown is no stranger to him, U.S – its largest trading partner, destination of 80% of exports – maintains the growth rate in the environment of 2% annually, significantly more dynamic than that of the southern neighbor, and lives the longest growth cycle of its historical series. This decoupling, with Mexico in economic slowdown and the US in frank growth, is an anomaly: in recent years, both economies have followed a similar trajectory, although with a markedly lower growth in the Latin American country.

With the fiscal route practically closed due to López Obrador's refusal to make a tax reform that allows to gain muscle and increase income before the first half of the sexennium and its commitment to a primary surplus, only the monetary lever remains. There is a margin there: interest rates touch 8% after the central bank has doubled them in the last three years with the aim of containing inflation and anchoring the exchange rate. But both variables seem now under control: the price increase has stagnated at 4% per year – a high figure, the second highest among the large economies in the region, only behind Argentina – and the currency traded in the environment of 19 pesos per dollar since the beginning of 2018, having even recovered ground since the beginning of the current year.

López Obrador, who maintains optimism about the economy, dropped on Monday, in an interview with Bloomberg, who would like to see a reduction in the price of money to relaunch a growth that is still far from the 4% promised by the leader of Morena in the campaign. In September we will know if the issuing institute bets on loosening the rope and gives a break to the Mexican economy.