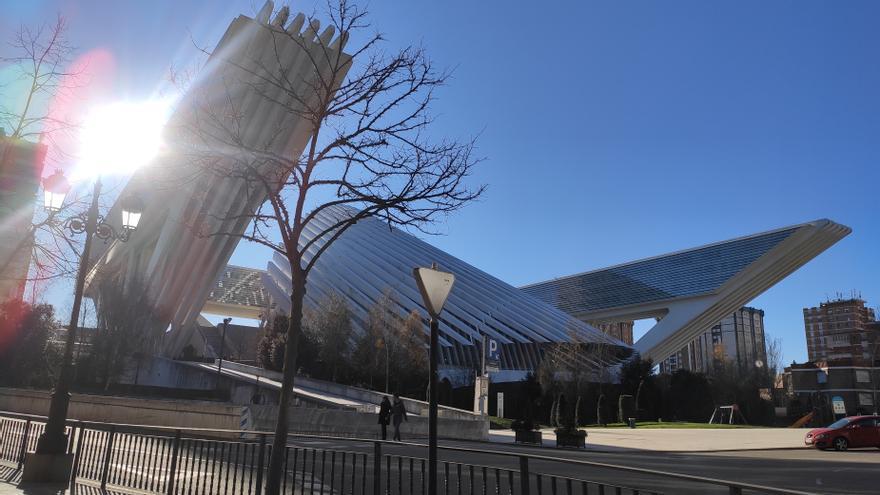 A maze of closed shops and empty aisles; a structure so highly avant-garde that the most difficult thing was to orient oneself inside and the easiest thing was that any building on the Asturian capital's skyline has been overshadowed by this gigantic white steel structure. Its name (popular), "the spider crab"; its author: Santiago Calatrava.

The Palacio de Congresos de Oviedo is another creation of the Valencian architect and also one of the most controversial and famous Spanish projects of this century. It has been since its inception, back in 2003. For almost two decades a series of misfortunes and blunders have plagued both its promoters and the architect, through the municipal government that commissioned it.

In 2019, the doors of the shopping center were closed permanently, leaving a space of 40,000 square meters empty as the central part of a building that houses, in turn, a convention center, a hotel and a regional government department. Its final cost 360 million euros, multiplied by five the initial budget. Whoever approaches there now finds a phantom shopping arcade that has just gone up for auction in bankruptcy. Its last owners, the company RPPSE Espacio Oviedo, has decided to dissolve the company due to the impossibility of assuming the nine million in debt they carry. The market price now exceeds 10 million euros, but the risk of getting the Calatrava seems much higher, taking into account its history. No buyer has yet been found and the future of the shopping center passes through the hands of the Swiss fund Stoneweg and the municipal government of the Asturian capital. The following is a review of a bizarre operation that led to ruin.

"Public land was squandered and ended badly, giving away these plots to companies and generating monstrosities without positive management." This is how Ana Taboada, councilor of Somos in the Oviedo council, explains the so-called "Operation of the Palaces."

At the end of the 20th century, two of the richest family sagas in the Principality, the Cosmen, owners of ALSA, and the Sánchez and Lago, powerful construction entrepreneurs, created the developer Jovellanos XXI. Its objective: to build two palaces (for congresses and arts) in two public plots of Oviedo, that of Vasco and that of Buenavista. To project both constructions, they chose the brand new Prince of Asturias Award for the Arts in 1999, Santiago Calatrava. Everything seemed to be going smoothly, especially when the municipal government, led by Gabino de Lorenzo (PP), designed a tailored competition for the construction company and released the land. That same year, he had already inaugurated another conference center and auditorium: Prince Felipe. It was the early 2000s, large infrastructures were fashionable and star architects even more fashionable.

After the construction of a car park in the first space, that of the Vasco, he had considered building three skyscrapers a few meters from the cathedral. Finally, the attempt was unsuccessful and the Valencian architect disassociated himself from this project, today Bulevar de El Vasco. In Buenavista, however, everything was going smoothly.

In 2003, the demolition of the old football stadium in Oviedo, the Carlos Tartiere, began, and a year later, the works to build the Oviedo Conference and Exhibition Center. In the center of the city, this three-storey building emerges, measuring 15,600 m2 and 46 meters high; with a large shopping arcade (2,300 square meters), meeting and multipurpose rooms, as well as an auditorium with 2,144 seats. In the wings attached to the central structure, there is the Administrative Services area of ​​the Government of the Principality of Asturias, the Eurostars hotel, with 150 rooms and a car park with 1,777 spaces.

Its differentiating element, in addition to its blatant presence on the adjoining buildings, is the movable visor. It was conceived as a white steel deck, 45 meters high, 32 sheets and 2,300 tons of weight that had to be folded and unfolded, which it never did. Due to execution failures, it remains static, generating, from the beginning, a tense relationship between the architect and the property, which this failed attempt cost seven million euros. It would not be the only unfortunate episode in the history of the Calatrava in Oviedo.

In 2006, during the construction of the complex, a gigantic slab that was to support the bleachers collapsed from 15 meters high, injuring three workers. The court of instruction number 2 of Oviedo imposed a fine of 3.5 million euros on the architect and the promoter company for not properly supervising the work.

The incident would open a new chapter between the promoter and Calatrava in the courts. Calatrava denounced Jovellanos XXI, demanding the payment of 7.28 million for the fees that were owed to him; While the company would file another lawsuit requesting 25.8 million from the architect for negligence in the execution of the building, for the collapse, the frustrated mobile visor and the laziness that it attributed to him when directing the project. Despite everything, in 2008 the shopping center was inaugurated and in 2011 the Palacio de Congresos.

The sentence came in 2014. The court ordered the property to pay what the artist demanded and Calatrava to face 10.5 million euros for the failures in the works. The start of the judicial war was starting to cost the Valencian architect. The price of his work had also been: it went from 76 million euros in the initial budget to 360 million that it ended up costing.

The last episode of this battle in the courts would put the Oviedo City Council on the game board. In February 2018, the Supreme Court ordered the consistory to pay 18 million euros to the company Jovellanos XXI. The sentence was an important breach for the accounts of the municipal government, at that time, led by the socialist Wenceslao López Martínez. That the Calatrava shopping center project, the Modoo, was "a fiasco" for the city council, was certified by the then mayor. In 2019, despite having brands such as Primark, Zara, El Corte Inglés or Burger King, the gallery was permanently closing its doors.

"We managed to attract the attention of entities and funds with which we held several meetings. Although, after the detailed study, interest declined in most cases." This is explained by Carlos Caicoya, member of the Prendes & Caicoya law firm, administrator of the competition for the property of the Calatrava shopping center. "However, we trust that the center will be reopened, helping to reactivate the neighborhood in which it is located," concludes the lawyer in conversation with elDiario.es. The market price of the shopping center is 10,270,000 euros, after the appraisal of the office.

At the moment no one wants to take over ownership of the shopping center, which has passed through the hands of the company RPPSE Espacio Oviedo after taking over from Jovellanos XXI in 2017. Despite its initial plans to refloat the gallery as a leisure center with movie theaters, the pandemic and the natural drift of the complex would end in the dissolution of the company. RPPSE disappears leaving a debt of more than five million euros to the Swiss investment fund Stoneweg and another two million euros long to the city of Oviedo, for the non-payment of the property tax (IBI) of several years. They are your main creditors, but they are not the only ones. In the list there are 27 entities that assume a total debt of nine million euros.

Now, in the absence of a buyer, the shopping arcade will remain in the hands of its current majority creditor, the Swiss investment fund Stoneweg. The debt of the defunct RPPSE Espacio Oviedo, would be settled with the Swiss fund, but not with the Oviedo city council, nor with the rest of the creditors. The future of the "spider crab"? It is back in the air and it will depend on Stoneweg. The fund must decide if it carries out a project, if it is looking for a buyer or if it reaches an agreement with the Oviedo City Council. The options: try again as a shopping center, reform it as a leisure space or turn it into a fairground for the city. Eighteen years after its construction, everything is yet to be decided.