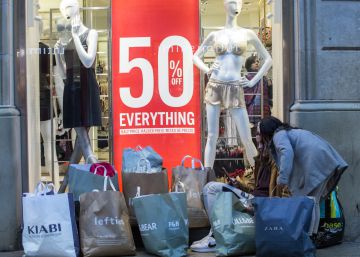 The budget that the Spaniards will devote to the rebates of the weeks after Christmas is contracted by 3 euros, and goes from 99.34 euros in 2019 to 96.34 euros today, which represents a decrease of 3%. And among the sales channels where they will buy by discount, the options gain weight on-line to the detriment of the physical ones, according to a survey of the banking comparator iAhorro.

“There is some economic uncertainty, both internally how external, what it means save more and spend less“, Notes the finance expert Antonio Gallardo,” and this phenomenon is also transferred to the sales. ” Thus, eight out of ten of the more than 1,500 surveyed by the comparator state that this year they intend to spend the same or less compared to 12 months ago (40.89% and 38.42%, respectively ). Gallardo also does not rule out that one of the possible causes of this descent is in an especially cold and rainy autumn, which means buying more warm clothes at the beginning of the season and a corresponding budget reduction in the following weeks.

“Electronic commerce continues to grow at the same pace of 2018, between 20% and 25% year-on-year, ”explains Gallardo. “This moves to specific moments such as winter and summer sales and that is why firms with physical establishments are also committed to encouraging purchases through their websites,” he adds. And he concludes: “In short, the consumer who is increasingly used to buying on-line want sales on-line“

The autonomous community in which the highest is the propensity towards discounts in outlets Physical is Castilla-La Mancha, with 44.43%. In the case of online outlets It is Madrid, with 36.44%. On the contrary, the largest proportion of consumers who prefer sales in physical stores is in the Canary Islands (30.04%) and, in the case of stores on-line, in Aragon (15.03%).

Discounts are no longer what they were

The means by which purchases with discounts are financed do not register transcendental variations with respect to last year. 34.43% will use the earnings of the month and 31.47% will use the card. “It is an unstoppable trend,” Gallardo notes. “It is likely that 2019 has closed with more than 4.5 billion purchase operations with this means of payment, which means a growth rate of 25% year-on-year,” says this expert, who points out that it is the most used method in acquisitions on-line. Another 18.46% will use the money saved, and 15.64%, the money received as a Christmas gift.

In recent years, winter sales have been losing relevance, especially for the proximity of Black Friday, Cyber ​​Monday and other pre-Christmas discounts. This is reflected by the participants in the iAhorro survey. 63.01% think that there are other better ways of buying than on sales (2.67 points more than last year), while 30.11% believe that you can still find great discounts (1.21 points less than in 2019).

Although the sales have already begun in many physical stores and on-line Throughout the territory, the Christmas campaign is not over yet, and once again the tendency of the Spaniards to stop acquiring gifts for the days immediately before Reyes, which is celebrated on January 6, is confirmed. This Saturday, the eve of the night of Kings, is the day they will spend more with the credit card every Christmas and one of the most consumed throughout the year.

On January 4, users will pay on average with their plastic 86.30 euros per person, 20.3% more than their daily average of the year, according to data extracted by Bankinter Consumer Finance of the movements of the credit cards that it manages. The average cost this Saturday is 8.30 euros higher than Christmas Eve.