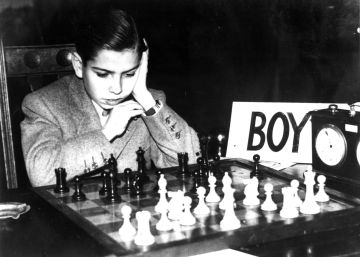 The exciting profiles of Bobby Fischer Y Arturo Pomar, two geniuses raised by the governments of their countries, and later abandoned when they needed help, well embody the miseries and greatnesses of the United States and Spain, respectively. Paco Cerdà takes as a hanger in The pawn (Pumpkin Nuggets) the first game between both chess players, in 1962, and on it hangs shocking stories of other pawns as unhappy as necessary for the progress of the world.

Even the illiterate Spaniards, who were not few (25% in 1939), knew who was the child prodigy Arturito Pomar (1931-2016), praised without restraint by the regime of General Franco since, at age 12, he made tables with the world champion, Alexánder Aliojin, in the Gijón tournament. No one doubted that he had the talent to become a great chess star, but he was born in the antithesis of an appropriate country.

Its critical moment is precisely the starting point of The pawn: the Stockholm Interzonal Tournament 1962, prelude to the World Championship. That government that so flattered him also forced him to ask for unpaid vacations at the Post Office where he worked and travel alone, without a coach to help him prepare games and analyze the postponed after five hours of play. He prowled the coveted seventh qualifying place during the first 18 days, but failed in the end, exhausted, because he barely slept. Much more serious: when he returned from Stockholm to Madrid he began to show the first symptoms of a mental illness that never left him.

One of the most impressed by the great talent of the Spanish mailman in Stockholm was Fischer (1943-2008), another genius with capital letters, whose intelligence quotient was higher than Einstein’s. But Fischer, used by the White House in anti-Soviet propaganda during the Cold War – when he dethroned the world champion Boris Spasski in 1972 – and treated viciously by that same government later, is also the example of what should never be done with children of great talent for anything: to allow them to become obsessed with their passion and not educate themselves fully as human beings.

Fischer ended up being a serious mentally ill. Icelandic neurologist Kari Stefansson, who was his friend a few years before he died, describes it this way: “Normal people almost always think within the confines of a box, and only sometimes we create something exceptional from outside the box; geniuses often create from the outside, but sometimes they don’t know how to go back inside; that, what we call madness, is what happened to Fischer. ”

It is very unlikely that a writer or journalist will not be subjugated by the profiles of Pomar and Fischer. But Cerdà went further: after identifying them as “pawns of history,” he located the first game between them – he ended up in tables after a seven-hour titanic struggle – in 1962. And he found that it is a very auspicious year to harvest and gloss others. many pawns in history, individuals whose “individual sacrifice explains collective struggles.”

So the reader comes and goes from time to time to the exhausting departure of Stockholm to meet those brilliant unfortunates of diverse Jaez: an anti-Franco guerrilla fighter lost in the mountains in the sixties, heroes of the struggle for racism in the United States, a bishop who faced Franco, pacifists, communists, shot and tortured at mansalva, feminists, movie-worthy characters like Julián Grimau or Dionisio Ridruejo …, even the irresistible Marilyn Monroe.

This “knowledge of people forgotten by society despite its importance” – as defined by Cerdà in a recent conversation with EL PAÍS – is truffled by intermittent jumps to the most juicy passages of the exciting biographies of both chess geniuses. “My objective was that each fact or fact included in the book is duly documented, without concessions to fiction, however minimal they may be,” explains the author, who also does not use a single unnecessary anglicism throughout the work, something news – unfortunately – in the times that run.

The signatory met Pomar and Fischer in person. And attests that it is very difficult to find pawns in history with greater power of attraction so that the adventures and misadventures of other beings as fascinating as unfortunate pivot on them.