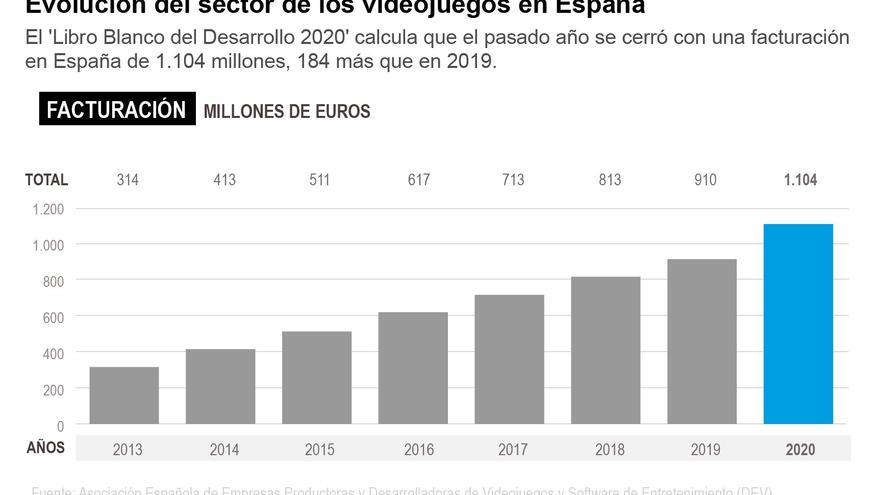 Madrid, Apr 7 (EFE) .- The video game industry in Spain has resisted the threat of the pandemic: the vast majority of companies that are dedicated to its development have not suffered losses (75%) and the templates have been maintained ( 93%), according to the data of the White Paper on the Spanish Development of Videogames in Spain 2020 made public today.

Most companies also declare that they have not had to cancel projects due to the health crisis, although they did have to paralyze them at some point.

The latest billing data for the video game in Spain, made public today, correspond to 2019, a year before the pandemic, although the book dedicates a section on the health crisis.

Forecasts for 2020 rise to 1,104 million euros, although the final figure is not yet consolidated. The pandemic is not expected to reduce billing estimates, quite the contrary, as confinement and restrictions have caused video games to be played more than ever.

“We do not know what the data will be for 2020, but the estimates are that it will continue to increase. It has to do with the fact that more has been played, but you also have to look at what has been played ”, explained Emanuele Carisio, technical secretary of DEV, the Spanish video game union.

That is, although more video games have been consumed globally due to the pandemic and the numbers grow, the most likely thing is that the most benefited are not Spanish studios, but large companies based in the United States or China, the two great powers in the sector. .

The White Book on the Spanish Development of Videogames is prepared annually by DEV, the Spanish Association of Companies Producing and Developing Videogames and Entertainment Software (DEV), with the support of ICEX.

Spain is the tenth largest market in the world in terms of turnover, but its reality is very diverse, according to the data published today. The reality is that a few large studios account for most of the turnover, and there are a large number of small companies that have problems accessing financing and going abroad.

61% of the total industry has a turnover below 200,000 euros per year, while only 4% of Spanish studios have a turnover of more than 10 million euros. The weight of this last sector – that of large studios – is clear: its business volume is equivalent to 70% of the entire industry.

There is also a clear regional imbalance: most of the Spanish studies in the sector (415) are concentrated in Catalonia (27.3 percent) and Madrid (24.4%), and followed very far by Valencia (10.4%). ) and Andalusia (13.7%). Despite this bicephaly, the Catalan region is the national locomotive of the industry, with more than half of the global turnover (51%).

In terms of employment, the data closed to 2019 amount to 7,320 direct jobs, a 6.1 percent increase over the previous year. The outlook for 2020 according to the data “is promising”, employment will foreseeably continue to grow to 8,500 jobs in 2023.

More than half of the studies declare they have problems finding the professional profiles they demand, there is a clear imbalance between supply and demand. In addition, employees in the sector are mostly qualified and young: almost half of the employees are under 30 years old and 90 percent are under 45.

For another year, the data highlights the serious problem of the gender gap in the sector: women only represent 18.5% of its workers.

The challenges and challenges of the sector remain similar to previous years, as highlighted today by different representatives of DEV. Overcoming them is necessary for Spain to catch up with its surrounding industries such as Germany, France, Sweden or Finland, whose video game companies have a “much higher” turnover ratio than the Spanish one.

Challenges include the need for stronger publishers -a figure similar to publishers in the book sector-, that generate more quality employment, that the ecosystem of small companies begin a transition towards a larger size and that access to finance for small businesses is facilitated.

In this sense, Antonio Fernández, Secretary General DEV, has opted for three issues to stimulate the economy of the Spanish video game development industry in 2021.

In the first place, to establish a tax incentive for the production of video games, similar to other audiovisual industries, and which, according to what has been indicated, has made some progress at the political level; also promote employment, especially of women in the sector; and that the Spain Audiovisual Hub Plan represents a “true turning point” for the Spanish video game industry.

This project, which was presented at the end of March by the President of the Government, Pedro Sánchez, affects all national audiovisual sectors, including videogames, and will involve an investment of around 1,600 million euros.

For Valeria Castro, Founder of Platonic Games and president of DEV, this year’s data shows the sector’s resilience to the pandemic and shows that the video game has been key in the face of the health crisis.