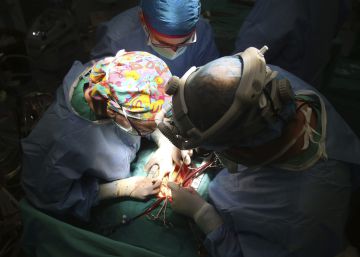 Half an hour of attention to the news can push anyone to misanthropy and despair. People are selfish and stupid and in life there is little more to take cover. However, real life is full of reasons to clarify the drama and there are some places where even the most cautious can get carried away by optimism. One of those sites was Murcia a few days ago. In a city newly punished by the torrential rains that sustained exceptional solidarity, the transplant coordinators of the Spanish hospitals met at their national congress. In its 34th edition they had the opportunity to know the latest advances in a discipline that is now one of the positive topics of Spain.

Rosario Pérez Beltrán says that today the awareness about donation is enormous, but that it was not always the case. “Years ago, you approached a person who had just died of a relative and they could look at you badly and say that it was not the time,” explains the transplant coordinator of the Basurto Hospital in Bilbao. Now, there are cases in which, for not having accepted the death of that family member, there is a rejection, but it is not normal. Nearly 90% agree to donate and Spain leads a large part of the indicators of this part of medicine in which the expertise of surgeons would be nothing without generosity of those who cede their organs or those of their deceased relatives. For many, such as those who are victims of terrible diseases, such as Amyotrophic Lateral Sclerosis (ALS), "giving is a revenge" and a way of giving some sense to their tragedy knowing that they will give life to others, adds Perez Beltran.

In Spain, 2,241 organ donors were registered last year, which allowed 5,321 transplants, 3,313 of them kidney, 1,230 liver, 321 heart and 369 lung. And the numbers have continued to improve, despite some social changes that reduced the availability of organs. A few years ago, Pablo Ramírez, transplant coordinator of the region of Murcia and organizer of the congress recalls, when in Spain more than 4,000 people died in a traffic accident per year, 50% of the organs came from those people, many of them young boys. "Now, fortunately, many fewer people die in these accidents and account for less than 5% of donors," he says.

Beatriz Domínguez-Gil, director of the National Transplant Organization, points out that in Spain donors are in the seventh, eighth and even the ninth decade of life. This extension of the age of donation, in which the Spanish system is at the forefront, sometimes makes it possible to use a smaller percentage of organs. The pancreas or heart are usually not useful when they come from very old people, but the possibility of taking advantage of the generosity of older donors increases the total number of transplanted organs. "If the US had our philosophy, it could perform 6,000 more transplants a year," says Dominguez-Gil.

Given the decline of some type of donors, such as traffic accidents, transplant coordinators have sought new options. Lucía Elósegui, coordinator of transplants in Guipúzcoa, explains how they began to take advantage of the organs of donors with neurological diseases, a particular case because in some cases it is not the relatives but the patients themselves who decide that they will donate their organs. “The first time I had a patient with ALS (a neurodegenerative disease that ends up paralyzing the patient, but in many cases he keeps his intellectual abilities more or less intact until the end) it was he himself who knocked on my door to say he wanted donate, ”he says. For Elosegui, in an opinion that he shares with many of his colleagues, donation is a tool to make the duel better. "We work to help patients and family members better assume death," he continues. “We do not work to get an organ, the first objective is to help the donor or his family,” agrees Pérez Beltrán.

Another way to expand the number of possible donors has been the application of techniques such as ECMO in a portable way. This extracorporeal circulation system makes it possible to oxygenate and keep the organs warm after death so that they do not deteriorate. Juan José Rubio, transplant coordinator at the Puerta de Hierro Hospital in Madrid, explains that "this type of technology is only available to hospitals that perform cardiac surgery." They have created a team capable of taking this technology to smaller hospitals in a portable way.

Years ago, half of the donors came from deaths in traffic accidents. Now they are a minority

The same Iron Gate team will apply in the coming weeks another novelty that will take advantage of more hearts of people who die after removing their life support. Before, in these cases other organs could be harnessed, but not the heart. Now, five minutes will be expected to certify death and then the heart will recover with an electrical impulse. "As soon as a case arrives we will be prepared to do so," says Rubio.

The cost of transplants, which can exceed 60,000 euros in the case of the liver or close to 70,000 in the case of lung, is justified according to the coordinators for the large number of years of life produced by these interventions. “I have a transplanted patient thirty years ago, who had just given birth, and today she already has grandchildren,” says Ramírez.

Despite the search for new techniques and new donors to expand the number of transplantable organs, the director of the ONT considers it utopian to think about covering the demand for organs, because when there are more organs the criteria and possible transplant recipients are extended. Meanwhile, the community of transplant coordinators is still trying to maintain a success that shows the possibilities of cooperation in a diverse country. “25% of transplants are performed with organs that come from another autonomous community and the level of donation of migrants, who donate even more than the Spaniards, is remarkable, because they know that they also receive,” concludes Ramírez.