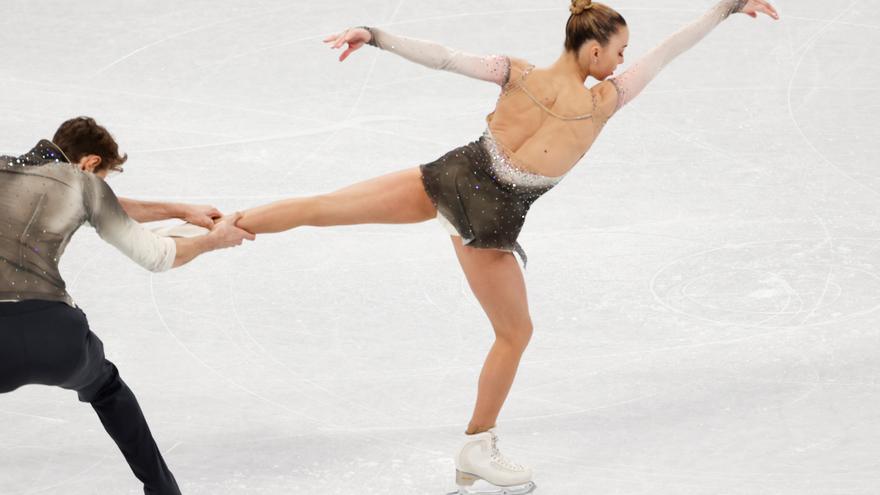 The Spanish figure skater Laura Barquerowhich was a finalist in the recent Winter Games of Beijing 2022 forming a couple with Marco Zandron, has tested positive in a control of doping during the Olympic competition and her case is pending the counter-analysis that the athlete has the right to request, the International Testing Agency (ITA) announced on Tuesday.

"The ITA informs that the sample taken from the Spanish skater Laura Barquero Jiménez has given an adverse analytical result for the prohibited substance Clostebol metabolite 4-chloro-3α-hydroxy-androst-4-en-17-one, according to the List prohibited from the World Anti-Doping Agency (WADA)," announces the ITA statement.

The sample was deposited by the Spanish skater in a competition control on February 18, after the short program of the couples modality, and the result of the analysis communicated three days later by the Beijing laboratory, approved by the WADA.

"The athlete has been informed of the case and has the right to request the analysis of the B sample"adds the ITA, which announced that it will now transfer the case to the anti-doping division of the Court of Arbitration for Sport (RAS ADD) "for adjudication under the anti-doping regulations applicable to the Beijing 2022 Games",

Barquero and Zandron concluded last day 19 eleventh in Beijing 2022, after becoming the first Spanish duo to qualify for the Games in the pairs figure skating event and reach the final.

On September 24, the Spanish couple secured their classification for Beijing with second place in the Nebelhorn Trophyplayed in the German town of Oberstdorf, a place that was not nominal although the Spanish Federation of Ice Sports (RFEDH) confirmed that same day that they would be the ones who would attend the Games.

The Nebelhorn Trophy was only the second international competition for the couple made up of Madrid and the skater of Italian originafter the good feelings left two weeks before in the Lombardy Trophy with another second place.

Laura Barquero, 20, and Marcon Zandron, 23, started training together in December 2020 with the Beijing Games in mind and he, Italian by birth, obtained Spanish nationalization on December 29.

The Madrilenian began skating at a very young age, when at the age of five she began to exercise in the Ice Palace of Madrid, near his home, after noticing his cousins, who practiced figure skating, and reached a great individual level.

At the age of 16, the Spanish Federation offered him to go to Italy and start exercising in pairs to train with Aritz MaestuSpanish skater, who was looking for a partner.

With him he competed in two European and two World Cups, but after Maestu's injury he formed a new duo with Tony Consul, and then with his current partner, who also started at the age of 6, with his older brother as a reference.

After their coaches, Bárbara Luoni and Luca Dematte, suggested they get together, they both exercise in Bergamo, with long sessions of 7 hours a day from Monday to Saturday, on the ice and off the rink.

Barquero, who is studying distance dance, suffered an injury this year that kept her off the dance floor for two months, which prevented them from competing for a place in the world championships in March and forced them to go to a playoff in Germany in September in search of one of the three remaining places to go to the Games.

In Beijing, after their eleventh place in the short program on the 18th, with a score of 63.34, they entered the final and also finished eleventh, one hundredth behind the top ten

For the first time in the games in Beijing, the Spanish team had a double presence in this sport, with the Boatman and Zandron contest in the group of couples and that of Olivia Smart and Adriá Díaz in the dance category.

Spain has not had any case of doping in the Winter Olympics since Salt Lake City 2002, where the skier Johann Muhlegg was positive after winning three gold medals.