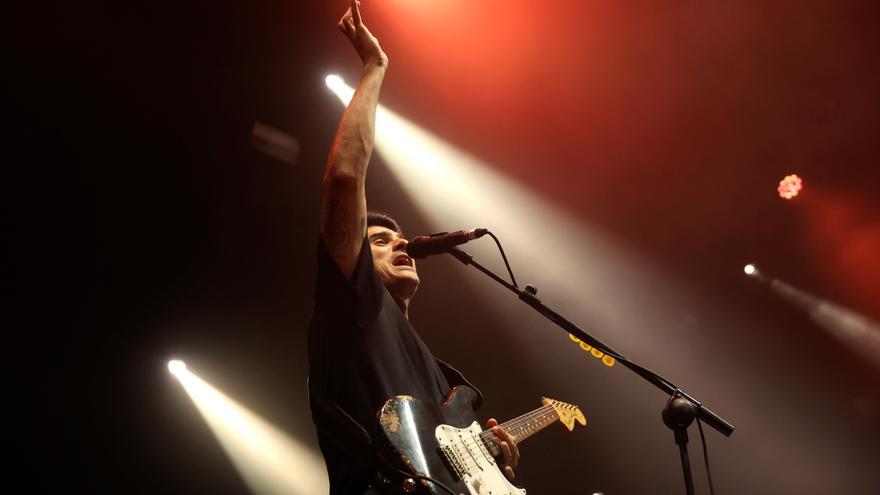 Going down a slide among crowds of fans in the Sweet Space room in Madrid, this is how Pignoise has announced the next tour of his album 'Diversión', with which they return to the stage after seven years. "We have returned to the origin, to do music because we like it, we feel like it and it amuses us, we have not set expectations ”.

“In the first albums the bands record the songs made up to that moment. This album has been something similar, since we present a compendium of songs that we have made in the time that we have been unemployed ”, the composer and singer of Pignoise, Álvaro Benito, told EFE, after the presentation of his tour.

In a immersive event Along with some fans of the band selected by Los 40 Principales, the visitors have made a tour of different rooms of the space, listening in each of them a song from the new Pignoise album, until they reach the end of the particular labyrinth in which Álvaro Benito (voice), Pablo Alonso (bass) and Héctor Polo (drums) have descended a slide to take photos and present 'Diversión'.

"It's been almost seven years since we released new material," explained Benito in reference to 'What remains to go' (2015), his latest work published so far. Since then the professional paths of the members of the band forked, although they never said goodbye "simply they could not be combined with the music full time".

Although "there was no continuous professional development," they did not stop composing or recording demos. That is why in 2019 they decided to "give an opportunity to recast songs", and although the pandemic came into play to extend time, the band decided to make a selection of some of the songs composed during the break.

“It has not been easy to make the selection, they have been composing for almost seven years and musically the human being is more seduced by the new stimuli than what has already been heard”, he has shelled referring to some of the songs on the album, which, as he explained, took shape in 2017 to now reach the album after “an exercise of maximum objectivity”.

"We had the songs ready, there were four to be recorded," said Pablo Alonso about the leap towards resuming the music fully before the pandemic broke out, a fact of which they make a positive reading. "We have had time to look in the rear view mirror, that rarely happens in the artistic world ", said Benito, for whom these years have served to" improve the sound and refine everything much more ".

The result is an album that, according to the fans themselves, acclaimed the group during the meeting, maintains the essence. “On this album we wanted to keep it more than ever. The last ones we did were different from what we were originally because we wanted to reinvent ourselves, but maybe they didn't sound much like Pignoise ”, explains Pablo Alonso.

For this reason now the band affirms having "hit the nail on the head" with 'Fun'. "When working on the songs we have found things that link us to the essence of the group in terms of choirs, guitar arrangements or drums," says the bassist, noting that the search to find that sound that defines their music has been the main objective .

Although true to their essence, they are clear that since they published their first works in 2003 the evolution has been remarkable. "The age is noticeable, musically we have improved, and the songs and compositions are more elaborated", Hector Polo has reflected on the group's journey, which is now publishing an album with thirteen themes, one of them only available in vinyl format.

“We are music consumers who have grown up with going to buy recordsWe love this ritual ”, Benito pointed out about this initiative, and although they claim to be aware that this act is lost in the face of new platforms, it is clear that music implies“ making songs or acts with which you are comfortable and happy. , also as a band ”.

In a seventeen date tour which will start on January 2 in the Sala Hangar in Burgos to end on May 12 in La Riviera in Madrid, Pignoise will travel with his 'Fun 22' tour from Malaga to La Coruña, Alicante, Murcia Granada, Valencia or Valladolid, in addition to Gijón, Bilbao, San Sebastián, Pamplona, ​​Barcelona, ​​Lleida, Seville and Santander.