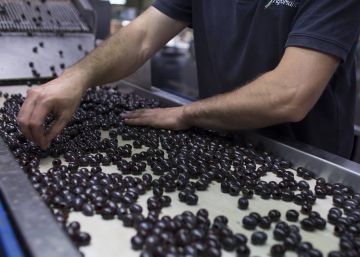 The Spanish olive points somewhat against the tariffs imposed by the Donald Trump Administration. As reported by Association of Exporters and Industrialists of Table Olives (Asemesa), The Federal Court of International Trade of the United States ruled last Friday against the resolution that establishes trade barriers to imports of Spanish black olives. Asemesa, who had filed an appeal against the measure, says the sentence “it could be the first step for the elimination of tariffs “, since it obliges to the US Department of Commerce to present new arguments, within 90 days, in order to maintain the surcharge for the Spanish product.

The Spanish black olive was one of the first Spanish victims of Trump’s protectionist vortex. The pulse between Madrid and Washington began in July 2017, when the US Department of Commerce, at the request of the Californian agricultural sector – which denounced unfair competition -, announced that it would begin to investigate whether public subsidies granted to Spanish producers Black olives through the CAP (Common Agricultural Policy) were illegal.

Four months later ditch that said aid allowed to set a price below the market, causing significant damage to indigenous producers, and chose to apply a preliminary tariff that was gradually raising until set at 34.75% since August 1, 2018. During the first month of application of this definitive assessment, sales to the US, the main destination for exports of Spanish table olives, fell 70%.

In its ruling last Friday, according to Asemesa, the US court gives the reason to the association in the two main arguments on which the Department of Commerce had based itself on considering that the CAP’s aid was illegal: that it was specific and that the demand for raw olives depended on the demand for the processed olive. This last argument, Asemesa clarifies, is what allowed the United States to attribute to the industry all subsidies granted to farmers.

According to the association, the court’s decision constitutes “a very important milestone, given that it is the American justice itself that has decided that the arguments used to impose tariffs on black olives are not justified.”

Just a year ago, the European Commission denounced to the World Trade Organization (WTO) the tariffs imposed by the US on Spanish black olives, claiming that they were unfair and that there was insufficient evidence that they affected US producers. The WTO accepted the request to create a group of experts to investigate the validity of the barriers anti-dumping activated by the Trump Administration, whose conclusions have not yet been released.

“This decision of the North American justice could lower tariffs from 35% to 20%, which would be a very important reduction,” explains the Secretary General of Asemesa, Antonio de Mora, regarding the ruling of the Federal Court of International Trade of the USA. “It also means very important support for the process opened by the EU before the WTO, in which these two arguments are also fundamental.”

This is not the only battle that the Spanish agri-food sector has open with the United States. Last year, the WTO gave the green light for Washington to approve tariffs of up to 25% on a long list of community products after failing to the aid that Brussels granted to the aircraft manufacturer Airbus was illegal. Oil, wine and cheese are the Spanish products most affected by the measure.