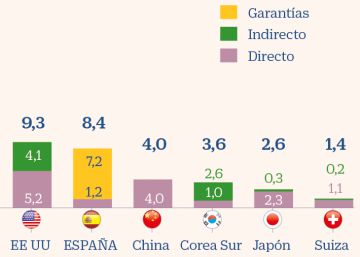 The coronavirus crisis augurs such a devastating macroeconomic impact that governments around the world have had to focus their efforts on a common goal: to deliver a health, social and economic response to the height of the pandemic’s expansion, in order to brake hit. Thus, while the European Union is finalizing the design of a common response mechanism to combat the crisis at the community level, each country has launched an unprecedented battery of stimuli. However, Spain’s plan stands out as the smallest in proportion to its GDP of all the major European powers.

Most of the regions have opted for a fiscal policy that goes through a significant widening of the deficit, and which will largely end up swelling their public debt, as reflected in a study by Mapfre Economics, which estimates that, at the end of By 2021, total public debt will have increased between 15 and 25 basis points of global GDP. The report classifies the fiscal measures adopted as direct, indirect and public guarantees, all aimed at smoothing demand (with public consumption), income compensation (via transfers) and avoiding a liquidity and solvency crisis.

In this way, the study data show that Spain has implemented fiscal measures of around 8.4% of its GDP, while in Germany the economic impact is 23.6%; in Italy, 20.6% and in France, 14.3%. Likewise, the stimulus package in the United Kingdom translates into 16.6% of its GDP and that of the United States, represents 9.3%.

The key measures taken by Spain have had an impact of around 13.9 billion euros, although depending on the duration of the pandemic and its requirement the amount could be higher, according to the International Monetary Fund (IMF), which includes the main fiscal mechanisms launched by all countries in the world as of April 16. The fund, in fact, goes further and quantifies the measures aimed at health services, ERTE benefits, subsidies, the extension of tax terms for SMEs and the self-employed, etc. In addition, the sum of 100,000 million in state guarantees is added to loans to companies and self-employed workers through the ICO, as well as other lines of credit.

Germany ranks as one of the countries in the world that has adopted fiscal measures with the greatest impact, including a budget of 156,000 million euros aimed at spending on medical care equipment, hospital capacity and investment in vaccine research. , as well as the mobilization of some 757,000 million euros in public guarantees for loans to companies and credit insurers.

In Italy, the government adopted an emergency package endowed with 25,000 million to strengthen the health system, preserve employment, support the income of the unemployed and self-employed and other measures to support companies. In addition, it mobilized additional state guarantees of up to 400,000 million. All measures allow to unlock more than 750,000 million liquidity for companies and homes.

France, for its part, increased the fiscal envelope dedicated to addressing the crisis to 110,000 million euros, which includes both liquidity measures and others aimed at the health system, to which is added a package of bank loan guarantees and systems of credit reinsurance for a value of 315,000 million euros.

On the other hand, Mapfre Economics, in updating its macroeconomic table, estimates that the crisis will cause a contraction in the Spanish economy of between 5.6 and 10.7% this year, which will raise the unemployment rate to a range between 17.4% and 23.4%, taking into account on the one hand a scenario in which the impact is minimal and, on the other hand, a situation of risk, in which the consequences of the crisis are aggravated . For 2021, the Spanish GDP is expected to recover with a positive variation of up to 4.4% in the best case or to decrease 0.1% in the worst. Unemployment would be at a rate of between 16.5% and 21%.

For all these reasons, experts believe that the activation of stabilizing measures in Spain will have “a colossal impact” on public accounts, not only due to the necessary current spending but also due to the reduction in income derived from economic activity. According to their calculations, the debt will exceed 115% of GDP at the end of 2021, although it appreciates “a certain margin” thanks to the low interest rates and the balance sheet policy of the European Central Bank (ECB).