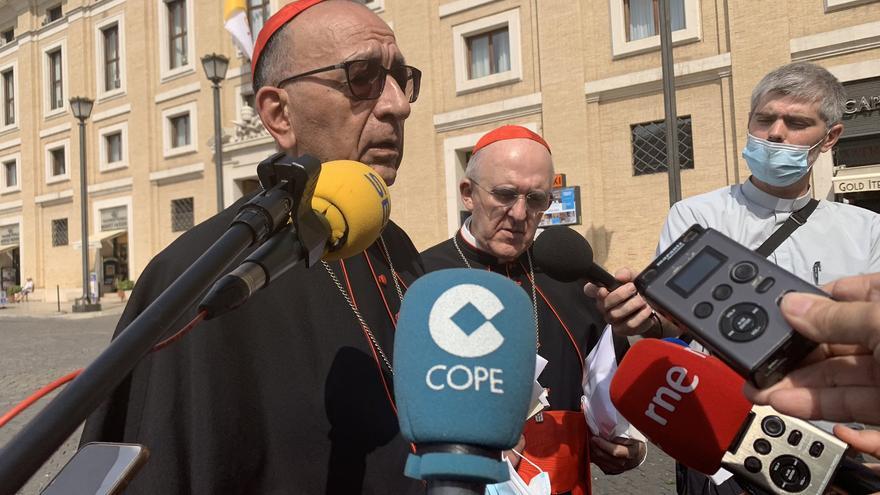 The Spanish bishops “are willing to help” to resolve the controversy surrounding the redefinition of the Valley of the Fallen. At a press conference after the meeting of the leadership of the Spanish Episcopal Conference with Pope Francis – “who is aware of everything” – both its president, Cardinal Omella, and the vice president, Carlos Osoro, were open to dialogue to reach an agreement with the government regarding the Democratic Memory law.

Speaking to the media after leaving their meeting – it lasted an hour and a quarter, much longer than usual – with Bergoglio, Omella and Osoro admitted that “the issue of the Valley of the Fallen has come up.” Although Omella stressed that “it is an issue that concerns the Church of Madrid more,” he maintained that “from the episcopal conference we are willing to help. We ask that there be a dialogue in society and with us, the Church.”

For his part, the Cardinal of Madrid (who will be responsible for the complex in the future), Carlos Osoro, insisted that “the Valley of the Fallen can be a great hope. It is a time for this place to be a place where we once again recover brotherhood, reconciliation, peace … and that we seek to make it a place to return to the fundamental “. “The important thing is the nouns: children of God and brothers of all men. It is a great opportunity for all,” he added.

Monsignor Omella, at the time, urged dialogue “that sometimes we lack in today’s society, not to rush trying to solve it. “I would like to add to this that to society, in addition to that issue that is important, we also have very strong wounds such as the Covid issue, people who are left without work. And that is where I make a call for them to join. plus all the forces that we have in Spain to advance on that path: political parties, government representatives, unions, the Church itself, working together for all problems but above all what we are faced with now, which is the people who are left without work. “.

Finally, and when asked about Catalonia, Omella admitted that “things are a bit moved by the issue of the president, after possible elections and such. We are waiting.” “I would not like to lose hope, all difficult and thorny issues are solved through dialogue, looking for solutions and among all of us” said the cardinal of Barcelona.

“Dialogue has to always be done without conditions, I do my best and then we do everything we can. And with great respect for everyone. He wants what he wants, the Pope, of course everyone knows how to solve it. , but he was looking for peace (…) What the Pope wants is peace, harmony, the union of all regions and all countries. I believe that we must always go there in compliance with the laws , respecting people. I think that is where dialogue goes. ”