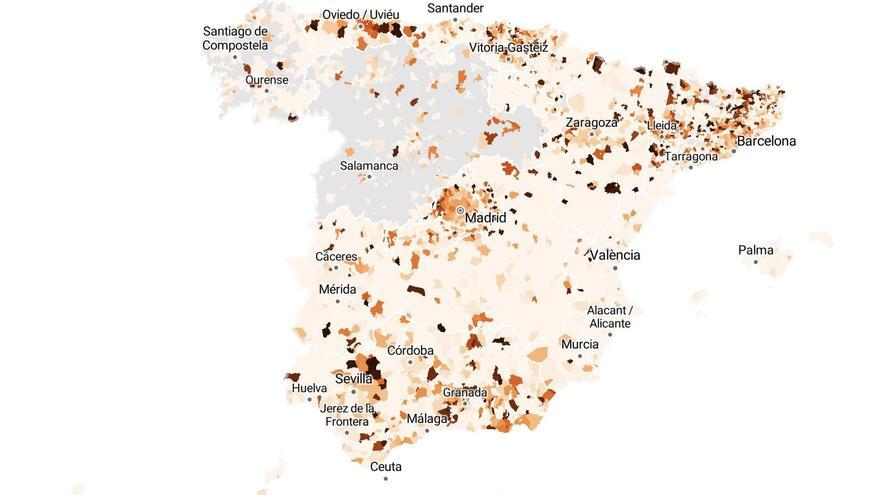 * Information updated with the latest data available as of March 16

The third wave paralyzes its descent in Spain and the first outbreaks are already beginning to be detected in some parts of the territory. The accumulated incidence slows its decline and infections stagnate or rise again in a large number of locations where a rebound in cases is seen. This change in trend affects one in four large cities and 536 municipalities where 19% of the Spanish population lives.

The upturn in infections is notable in towns such as Arona (+ 325% of cases in 14 days), Adeje (+ 175%), Badajoz (+ 144%), Siero (+ 114%) and Cáceres (+ 97%). The highest increases are concentrated in the Canary Islands, Catalonia, Extremadura and Andalusia where the fall in infections stagnates or cases rise again in many municipalities, according to the analysis carried out by elDiario.es based on data from the health ministries of 17 autonomous communities and the autonomous cities of Ceuta and Melilla. You can read more details about obtaining this data in the methodology.

Even so, the figures remain very far from the triggered incidents that had been registered at the end of January. Now only 1% of the population, of just over 200 municipalities, live in localities above the threshold of 500 cases. None of them is a big city.

On the negative side, a part of the territory is still at extreme risk levels: 8% of the population lives in municipalities that register more than 250 cases per 100,000 inhabitants in 14 days, the level that the Health traffic light classifies as risk extreme. Among them, 18 cities with more than 40,000 inhabitants. The ranking of large municipalities with more cases in two weeks is led by Melilla, Vic (Barcelona), Siero (Asturias), Lleida and Majadahonda (Madrid).

Expanding the focus, the positive trend of the coronavirus curve continues in most of the territory. Confirmed cases of COVID-19 continue to decline 📉 in 1,003 municipalities where 67% of the Spanish population lives (last week it was 77%). On the contrary, they are increasing 📈in 438 municipalities where 13% of the population lives and they are in the plateau phase (they remain more or less the same as two weeks ago) in 98, where 5% live. The rest are very small municipalities where very few cases are registered – less than 5 every two weeks – or for which there is no information available – representing 14% of the Spanish population.

This week there are already 27 million Spaniards – more than half the population – who abandon high risk levels in the pandemic, when transmission is uncontrolled. Specifically, 4,800 municipalities already register less than 150 cases per 100,000 inhabitants in 14 days, the threshold that Health considers of “medium” risk.

This analysis makes it possible to verify in which areas there is a higher incidence rate based on variables such as average income, percentage of population over 65 years of age or population density. Precisely, from all administrations hundreds of statistics are published broken down by municipality: population by age, country of birth, nationality, average income, data on registered unemployment, level of studies or mortality rates.