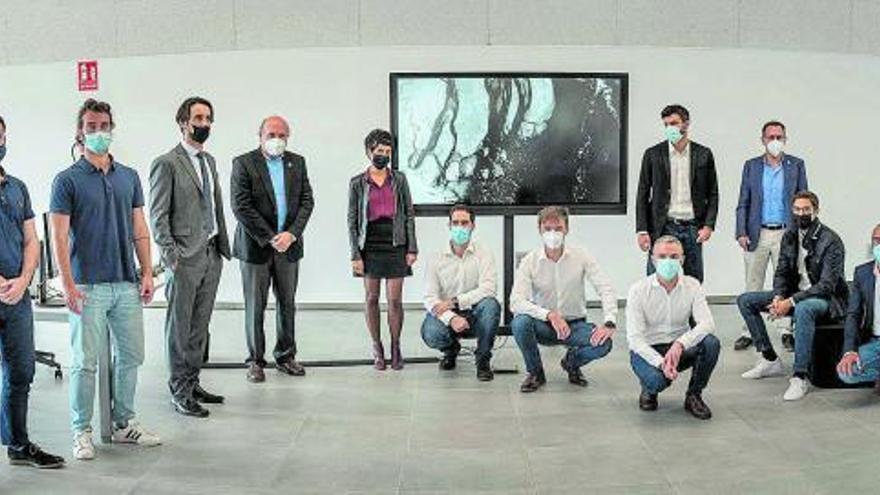 The main characteristic of this project is that it has been developed entirely by the IACTEC-Espacio, as Rebolo pointed out, “it is the difference with other projects that we have collaborated on and it shows that the IAC can independently and successfully develop space technologies ”.

The main objective of this project was to demonstrate the capacity of the Instituto de Astrofísica de Canarias to be able to develop more ambitious projects in the future. In fact, work is already underway on an Alisios nano telescope, which will be the continuation of this camera and will be launched at the end of next year, and a mini-telescope, IACSAT-Tajinaste. In addition, “it acts with a tractor effect to attract highly technological companies that generate very high-quality jobs, working on cutting-edge technologies,” according to Oscov.

Among the intentions implicit in the project is to favor public-private collaboration, open new windows of observation of space and the Earth and generate a multidisciplinary team of engineers and physicists, because “every great project is built around a great team” .

At this point, Oscov made a special mention to the current team, in charge of the development of Drago and formed thanks to the Cabildo’s training program, which, according to the researcher, is “spectacular and capable of facing any project that comes their way.” . Throughout the process they have also had the collaboration of thirteen students from Canarian universities, which is an opportunity for the students and the institutions themselves.

The installation of new companies in the Archipelago would represent a new market niche to end the “single market focused on tourism”, in the words of the vice president of the Cabildo, Enrique Arriaga, who added that, from the Cabildo, they believe “firmly in the science, technology and innovation ”. The director of the IAC has described the future as “bright”, since the Canary Islands could become a world reference in relation to space, just as it is in the field or astrophysics, said Professor Oscov.

Among the companies that have expressed their interest in collaborating with IACTEC and the possibility of establishing themselves in the Canary Islands are OBC, from the Basque Country; Ensis, from the Valencian Community or OpenCosmos, from the United Kingdom, although, according to Oscov, for now, they are only tentative. The only one that has already been installed is Alquimex and “it has meant a great investment”. Oscov highlights the great strides they have made. “A few years ago we were the ones who were going to introduce ourselves to important companies and now they are the ones who are looking for us.”

Drago, will be constantly capturing images of the Canary Islands and will be able to capture active sources of volcanoes, see through clouds of dust to detect fires, observe hydrocarbon spills in the sea or analyze desertification or the advance of crops, which will contribute “Great profits for the Islands”. All this is possible thanks to the fact that it works in the SWIR range, short-wave infrared, invisible to the eye. This characteristic makes Drago “the first European camera aboard a small satellite that operates in these bands”.

This camera was built following the strictest standards of the European Space Agency. The team worked for several years to obtain the final result, a one kilogram camera that consumes less than an LED bulb and that “seemed to work.” “It is not the same that it operates on the ground as it survives a launch and operates in space with totally different conditions,” explained Oscov, highlighting that “its mere survival is already a success.”

It was launched integrated into the ION satellite, from the D-Orbit company, which in turn was inside Space X’s Falcon 9 rocket. Once in space, the first weeks it was verified that the satellite was working well and that it was in proper orbit. The next step was to “check that Drago was alive”, the following weeks were used to carry out “all kinds of tests, until the first light was reached”. Oscov describes the moment of obtaining the first images of a space device as exciting and disappointing, because “you see that it works, but since it does not have the right parameters, the photographs are always ugly.”

However, with Drago the opposite happened, the first images were “spectacular”. These have a high quality, almost at the level of other much more developed and much more expensive technologies such as Google Earth or Sentinel, the star multi-satellite project of the European Space Agency. Although Oscov stressed that the intention is not to compete with Sentinel, but to complement it ”.

The project’s value for money stands out, since the camera was developed with an investment of 200 thousand euros, one hundred times less than the value of Sentinel. However, both Oscov and Rebolo recognized that the true value of the project is not in the economic investment, but in the human team that participated, a team with the intention of continuing to grow in the coming years.

In the future, in addition, other projects will be developed such as the first Canarian nano telescope, Alisios. It will be an improved Drago that will work on other issues such as optical communications, “very important for the future of space technologies that can help the Canary Islands obtain very important returns and attract even more companies”. Alisios will be the precedent for IACSAT-Tajinaste, the IAC’s first small satellite for astronomical observation. The objective of this project, which is already being worked on, is to serve as a “third observatory from space” that complements the Teide Observatory and the Roque de los Muchachos Observatory. It will be able to capture information that is not appreciated from Earth, such as other dangerous planets or asteroids. These developments would allow the work begun by Drago to continue, which will have a secure life of one year, although Oscov expects it to last “two or three years, five would be very optimistic, but possible.”

The images will be made available to society with freedom of use “both by the public and private sectors,” according to Rebolo. This feature is also an opportunity for companies to obtain data and create jobs. The camera is expected to capture the first images of the Archipelago in the coming weeks.

Enrique Arriaga highlighted the work carried out by the IAC, which has been “years at the forefront of R + D + i and in the development of cutting-edge technology”. However, he stressed that it is only the beginning so “we must promote the work of our scientists, bet on technology and get all administrations to invest more in science.” In addition, he congratulated the IAC and the entire team for taking “Tenerife’s name to the top, to the place it deserves.”