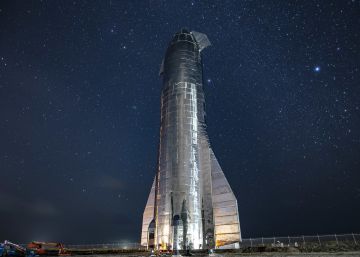 In 1954, three years before the Soviet Union launched the first artificial satellite into space, Thomas Cook, the oldest travel company in the world, opened a list of reservations to travel to the Moon. The company promised to provide the tickets as soon as this type of space cruiser was technologically possible, but it went bankrupt last year without having fulfilled its space promises.

The idea of ​​mass space tourism seems far-fetched today, but an obvious analogy could fuel optimism about that possibility at the beginning of the space race. Only half a century earlier, in 1903, the Wright brothers had successfully tested the first plane on a flight that traveled just over 200 meters. In 1927, Charles Lindbergh covered with his Spirit of St. Louis the more than 6,000 kilometers that separate New York from Paris and in 1954 commercial aviation began to explode. The space, sixty years after Yuri Gagarin’s orbital trip, has only received a handful of tourists who paid more than 20 million euros for their trip and it does not seem that access will become popular soon.

For decades, the conquest of space was in the hands of great powers that sent soldiers, engineers or scientists to test technologies, do experiments or demonstrate superiority over the adversary. The situation has changed. Today, some of the great magnates of the planet have joined the usual competitors in the space race. Jeff Bezos, founder of Amazon, and Elon Musk, who became a millionaire with PayPal, have put their fortunes at the service of companies with which they want to finally make the space accessible. Bezos has proposed to convert the Solar System into the place to obtain resources and manufacture products so as not to contaminate the Earth. Musk wants to be the man who takes the first humans to Mars and doesn’t rule out getting there himself.

The freedom with which billionaires use money in their space ambitions has also left room for eccentricities that did not take place when the adventure was sponsored by public funds. In 2018, Japanese millionaire Yusaku Maezawa bought the first tour package to reach the Moon, orbit around it and return. If everything goes according to plan, it will depart in 2023 on board the ship Starship from SpaceX, Musk’s company. Maezawa, who has an important art collection, wants to invite several artists to his trip and also, as he announced last week, a special woman. Unlike the requirements that astronauts used to demand, the companion of the Japanese businessman will only have to be over 20 years old, have a bright and positive personality, want to live life to the fullest and, as icing, wish for world peace. The first woman to reach the moon would thus be the winner of a contest organized by a potentate to become a girlfriend.

Until now, the only space tourists have traveled to the International Space Station aboard the Soyuz capsules designed by the Soviets. In the 2000s, Russia saw paid trips as a way to finance its space program. Musk also considers this type of business a way to cover the immense expenses of developing its own space program. The South African tycoon estimates that two annual trips such as the one he sold to Maezawa could account for about 10% of his SpaceX company’s revenues. In addition, the Japanese and his companions would be a kind of test pilots in a mission that, like all those that require space travel, involves significant risks. Although SpaceX has successfully made 32 launches since 2006, Mark Zuckerberg can remind those who forget the risks of trying to leave Earth how three years ago he lost a satellite with which he intended to give Internet coverage to the countries of sub-Saharan Africa when the Falcon 9 that he was going to put it into orbit exploded on its launch pad.

In 2016, a Falcon 9 carrying a Mark Zuckerberg satellite on board exploded on the launch pad

In any case, the dates of the space missions cannot always be fulfilled. More than 600 people, including celebrities like Ashton Kutcher, have paid an advance of at least $ 200,000 for a seat in the SpaceShip Two, the suborbital spaceship of Virgin Galactic, the company of millionaire Richard Branson. In 2013, Branson suggested that the first tourists could fly the following year, but in October 2014, an accident during a test flight killed one of the pilots and left the other badly injured. Today, 16 years after Virgin Galactic began selling the first tickets to the border with space, there is no set date for the start of regular flights.

The interest in the space of the ultra-rich, that small group of humans who sees how their fortunes grow in crisis or bonanza, has reduced the means of transport to space and their great drivers believe they will be able to succeed where the great powers failed. “If you were a century ago and you told people that today you can buy a ticket and fly around the world on a plane, they would think you are crazy,” Bezos said recently using the same optimistic analogy that led Thomas Cook to promise space travel in 1954.