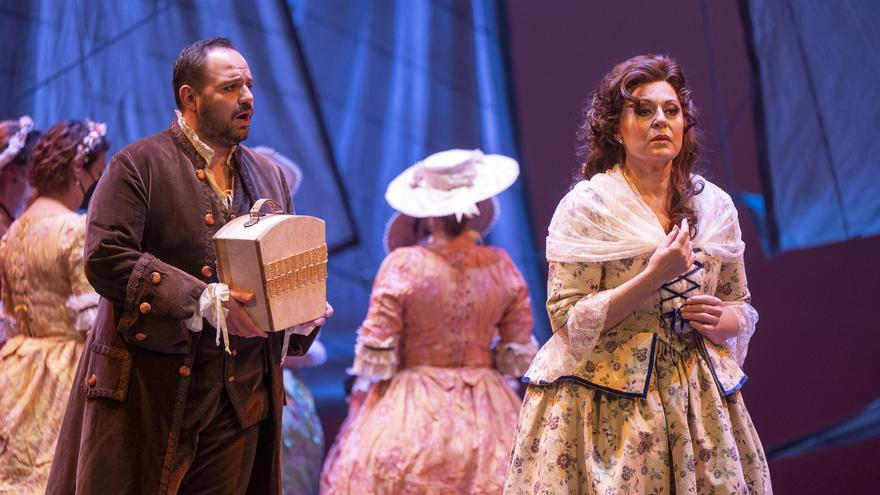 The Viennese soprano Martina Serafín replaces the Uruguayan soprano María José Siri in the functions of Manon Lescautthe first opera with which Puccini triumphed, which opens this afternoon, at 8:00 p.m., the 55th Season of Opera of Las Palmas de Gran Canaria-Alfredo Kraus at the Pérez Galdós Theater. A tracheitis has prevented the participation of Siri, also known as La Majo, in this operatic masterpiece that returns to the capital's coliseum more than a decade after her last performance in the city in 2009.

Thus, Serafín will play the protagonist that lends its title to Puccini's first great success, where the vocalist will share the stage with the Turkish tenor murat karahanin the skin of the knight Des Grieux, and with the Korean baritone Youngjunwho will play the role of Manon Lescaut's brother, with the participation of the Gran Canaria Philharmonic Orchestra (OFGC).

This is a classic version of Manon Lescaut, which embroiders the original score and libretto in four acts, despite the format limitations imposed by the health situation. After its inaugural function, the performances will be repeated on February 24 and 26, at the same time, in the context of the return of the Ópera de Las Palmas de Gran Canaria-Alfredo Kraus season to the Pérez Galdós Theater, after several productions earlier in the Auditorium due to the pandemic.

Canary Friends of the Opera (ACO) premiered Manon Lescaut in 1981, in collaboration with the Lviv National Theater, precisely with Martina Serafín as the protagonistwho is reunited with the character in the capital of Gran Canaria, at the Pérez Galdós Theater itself, 40 years later.