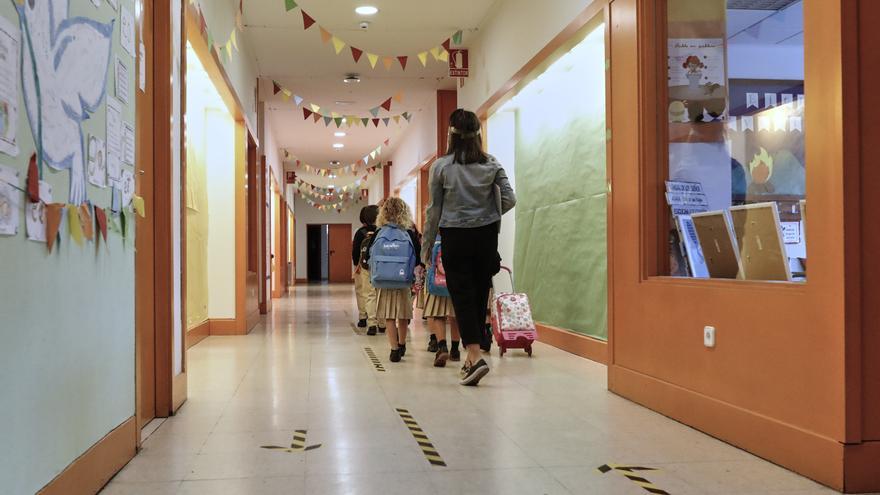 The sons and daughters of women who suffer gender violence are victims of the same violence, but we know little about its reality. Getting closer to her is the primary objective of the study Minors and gender violence, presented this Thursday by the Government Delegation against Gender Violence. The investigation completes the Macro-survey on Violence against Women published by the Ministry of Equality a few weeks ago and has surveyed 10,465 young people between 14 and 18 years old. Among its conclusions, it stands out that greater exposure to abuse suffered by their mothers is associated with a greater risk of reproducing it in their own partners, as well as more physical and mental discomfort, low self-esteem or worse academic development. However, the study emphasizes, their situation increases the chances of suffering from these problems, but “does not determine them.”

To arrive at these results, the research, carried out by the Preventive Psychology Unit of the Complutense University of Madrid (UCM) and in collaboration with the Ministry of Education and the autonomous communities, has asked them if they have been aware that their mothers have suffered some episode of violence by their partners at least “sometime”. 24.7%, almost one in four, have answered affirmatively. And of them, 77.15%, three out of four, admit to having received some of these same behaviors themselves. 70% answered that the author was their father.

Among the behaviors that their mothers admit to having suffered most are those related to psychological violence: they have been made to feel fear or have been insulted and ridiculed; It is followed by “those that deteriorate in a special way self-esteem”, such as telling him that he is worthless, and those of control (“what he says, where he is going, how he dresses” …). At a third level is the attempt to isolate the woman from her friends, followed by physical aggression (7.1%).

To delve deeper into the problem, the researchers have divided the young people into three groups based on their exposure to abuse: reduced and punctual, in which it is 80.6%; medium (13.3%), in which there are adolescents whose mothers have suffered “sometimes” this type of situation, especially of “abusive control and emotional abuse”; and extreme. In this last group, to which 6% belong, young people have been exposed “frequently” to violence, to “more serious” behaviors and from earlier. In other words, almost 20% of adolescents whose mothers have been victims have experienced it repeatedly. These last two groups are precisely those with a higher risk of suffering from discomfort and developmental problems when compared to the first.

Specifically, in group one, the one with the least exposure to violence, up to 11.8% of the young women acknowledged being victims of violence in their own partners, but the percentage climbed to 23.8% in two and 32.9% in the three. In other words, the average exposure doubles the risk and the maximum almost triples it, the study estimates. In the case of boys, again, the percentage rises as the degree of abuse increases (13.9% of young people exert it on their partner in group one, passing through 31.7% of group two and reaching 35% of three). However, the study specifies, neither the vast majority of girls who have been exposed to violence are victims nor are the majority of male aggressors: the results “reflect that the reproduction of violence from one generation to the next is neither automatic nor inevitable. “.

The indicator of the reproduction of violence, explained in the presentation of the study by María José Díaz-Aguado, principal investigator, is key from a scientific point of view, but has stressed that it should be interpreted with caution: “The one that increases risk means that it increases the probability, there is greater vulnerability, but we cannot make the mistake of transmitting that these boys and girls are condemned to it. In fact, the vast majority do not reproduce violence and manage to get out of the cycle “, he has summarized. However, knowing what effects this situation has on their lives is essential to prevent it because the greatest risk is related to “the damage caused by exposure to gender-based violence against the mother, which intervention with these minors must help heal “.

The study also analyzes other variables that it compares between the three groups chosen. Regarding the academic trajectory, group three, the group with maximum exposure, has more possibilities than group one to repeat a year in primary and secondary school, skip class without justification or be late. At the same time, the minors in group two, who have a medium exposure, have higher repetitions in secondary school or absences. The expectations of making a career are reduced as the abuse is more frequent. The level of self-esteem also decreases as exposure to abuse increases, as well as the physical and mental discomfort of adolescents, including headaches, difficulty sleeping, sadness, irritability, nervousness or fear.

Likewise, the minors in group three experience less school integration and a perception of worse relationships with their peers at the educational center. The pattern is repeated when analyzing drug, alcohol or tobacco consumption: there are higher percentages of zero or low consumption in group one of the young people, with less exposure to gender violence, and higher in the following, reaching to its maximum at three.

In some of these indicators, there are differences by gender: the worst self-esteem or physical or psychological discomfort affects girls to a greater extent than boys, while they justify violence more or present higher levels of stress in situations that contradict stereotypes macho. For example, think about the situation that they had to stay at home taking care of a son or daughter. Díaz-Aguado explains that these types of results speak of the need to implement “a gender approach” when analyzing the effects. Boys “tend more to externalize the problem” and “have been brought up in a model of dominance and submission, they have heard more advice in favor of violence and the superiority of men in the couple that makes them feel more stressed.”

The conclusions support the idea that being the son or daughter of a victim of gender violence is a “specific form of child abuse”, that they are direct victims of what their mothers suffer and that “it is more frequent than is usually assumed” . It seems, the report explains, that exposure to gender-based violence suffered by their mothers produces in minors “similar damages” to those found in women, so it focuses on the intervention “from different contexts” .

How? Among other things, the study calls for “modifying the environment of minors”, in which “they have been advised to dominate and submit as well as the use of violence as a way to resolve conflicts” and to provide them with a different environment, “with effective opportunities to learn alternative advice, in favor of equality and non-violence “. In this sense, the results of the research suggest that “living with the abuser increases the risk” and doing it with the mother, who stands as the main figure to turn to “and the one who has helped them the most,” says Díaz -Aguado, reduce it. Accompaniment is a key tool, but only 25% of adolescents have received help from a psychologist or psychiatrist, estimates the investigation.

Education also stands as a containment barrier. And, in fact, one of the results of the report points to this need: girls who remember that some content against gender violence has been worked on at school and who remember talking about it at home, have less risk of reproducing it. Most of the young women (51.3%) who break with the intergenerational reproduction of gender violence recall having worked against this problem; I remember that it is lower (43.8%) among those who do reproduce it. In the case of boys, however, no statistically significant relationship was found.

To address issues related to education, the study has also asked 3,045 teachers and 227 Management Teams of Compulsory Secondary Education (ESO) centers. And among the conclusions, it stands out that 46.8%, almost half, remember having worked in the classroom on the problem of gender violence in a partner or ex-partner and only 4.6% affirmed that it is not necessary. “Important” figures, Díaz-Aguado has remarked, that speak that “the school recognizes its role”, but also calls for the need to generalize these contents “aimed at the prevention and rejection of all types of violence in the classroom. specifically gender, and with a comprehensive human rights approach “.