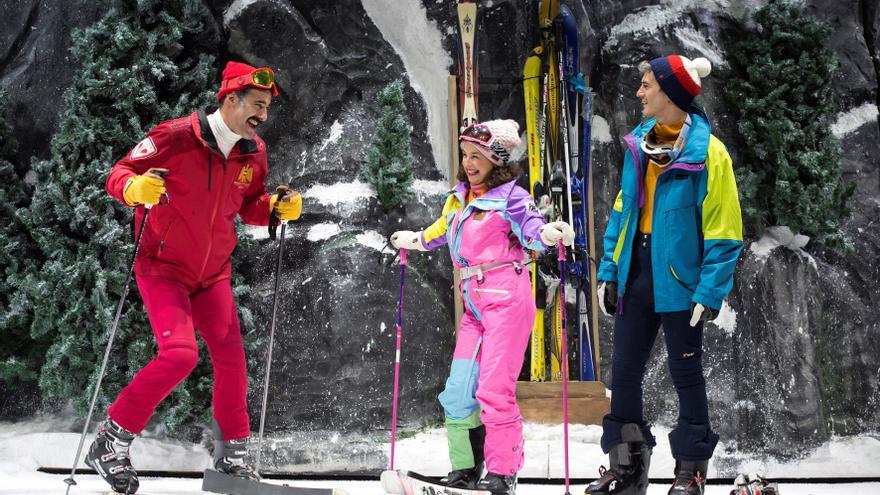 Malaga, Jun 15 (EFE) .- A practicable ski slope, snowfall and chair lifts are prominent elements in the scene during the performance of the tragicomic play “On the track”, which premieres in Spain directed by Marc Montserrat-Drukker in the Teatro del Soho Caixabank (Málaga) and which exposes the decline of couple relationships in a humorous way.

It presents the trip of two couples to the Austrian Alps to enjoy a ski vacation and unforeseen events arise when the impudence of their instructor, played by comedian David Amor, and a single girl whose origin raises suspicions in the group enter the scene.

As the days go by, the holidays – presumed as idyllic by the characters – cause the relationships of these couples to be dismantled and secrets come to light that until now had not been revealed and that lead to extreme situations.

“It places a lot of emphasis on the fear that we human beings have of loneliness, we tie ourselves to couples no matter what happens because of that fear of loneliness and that makes us absolutely dependent,” explained its director this Tuesday at the presentation of the work, which he defines as a “bitter” and “bittersweet” comedy.

He has highlighted the social criticism of love relationships that lies behind the comic character of the representation, which “exposes” and “ridicules” the characters who “will do anything without scruples, without limits, to get loved.”

The cast that stars in the play is also made up of Olalla Hernández, Bárbara Santa-Cruz, Cecilia Solaguren, Pablo Vázquez and Ángel Velasco, who have had to face difficulties such as “skiing” live, Montserrat-Drukker pointed out.

“Technically there is a lot of challenge, but in the end the actor is what he likes: finding those challenges and difficulties to try different things,” explained David Amor, who plays Gündalf, a ski teacher who creates hilarious situations due to his problems with the Spanish.

Another of the interpreters, Pablo Vázquez, explained that the work shows the reality about the trust that is deposited in a vacation when you think that “everything is going to be wonderful” and finally they end up becoming “a well of frustration.

This play was created by John Godber, the third most represented British author after William Shakespeare and Alan Ayckbourn and whose theater is characterized by criticizing the English middle class through tragicomedy.