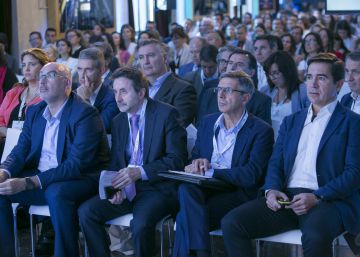 The echoes of the Business Roundtable, one of the most important lobbies in the US of which the CEOs of the main companies such as Apple or Ford are part of, about the change in business paradigm have arrived in Spain. Almost fifty years after the Nobel Prize in Economics Martin Friedman laid the foundations of contemporary capitalism in his essay The company's social responsibility is to increase its profits (1970), managers of companies such as BBVA, Telefónica or Repsol took advantage of the tenth anniversary of the Seres Foundation to pick up the glove of the American pressure group, question Friedman's approach, and raise a change in the principles that govern corporations. In their opinion, these should have a social purpose, not a mere economic interest. The proposal comes as a possible solution to the challenge of the climate crisis and the rapid transformation of an economy marked by digitalization and the concentration of wealth.

"It is in our hands to address the most important challenges that humanity has ever had and the future depends on what we do today," the president of BBVA, Carlos Torres, to the more than 300 attendees of the event organized by Beings in the Royal Theater. “Companies cannot stand still. We have to get ahead of all the social commitment, ”he said.

In the opinion of the banker, "responsible business leadership" is needed, which advocates new business models and helps combat the main problems of today's society. "The future of banking is to finance the future," said Torres, who suggested extending BBVA's commitment to mobilize 100,000 million euros in sustainable financing between 2018 and 2025 for environmental and social projects. "In July we were already 22,000 million and I trust that we will be clearly exceeding those 100,000 million in 2025," said the director.

The president of BBVA encouraged to join this initiative and launch new business models based on social commitment, not without remembering its profitability: “This strategy is not done just because it is correct, but because it is economic. The demand for shareholders and investors is gigantic, working in a more sustainable world is business, not only is it right. ”

However, this new social approach of companies entails serious practical difficulties. The CEO of Repsol, Josu Jon Imaz, who also highlighted the need for greater social commitment, recalled that the "real challenge" that companies have "is to generate value in a sustainable way that also has an impact on shareholders." The reality of the current business model, in the words of Imaz, is that managers are required to “generate value every day and guarantee the profitability of the company”, and that can create contradictions with a total commitment to the social objective.

As a solution, the first executive of the oil company believes that the fight against climate change or social investment must be seen as a long-term investment: “To avoid the rise of the planet's temperature, we are improving the energy efficiency of our plants, increasing Biodiesel production and entering the electricity business with renewable energies, which are also growing businesses. We hope to reduce our emissions by 40% before 2040, as stipulated in the Paris Agreements, ”said Imaz.

The participants in the event pointed out the consequences of an economy that changes at a rate never seen due to new technologies. Emilio Gayo, executive president of Telefónica in Spain, recalled how Instagram had brought together 100 million users in less than two years. The volume of information, cybersecurity, the replacement of jobs with smart software or the computer lag of workers, urgently demand “a letter of principles, because there are guaranteed values ​​in the analog world that are questioned in the digital world” said Gaius.

On the other hand, Francisco Román, president of the Seres Foundation, presented the company as the necessary instrument to face the global problems mentioned. “Companies can adapt more easily than institutions or governments and this gives them greater responsibility with society. That is why they must lead this change, ”he summarized.

The Seres Foundation celebrated on October 7 the X edition of its awards, which represent a recognition of the best business practices in social matters. This year the winners were Kern Pharma, Mutua Madrileña and Tendam, thanks to their programs focused on different fields, such as health or gender violence. In addition, in a special way and on the occasion of the tenth anniversary, Ford Spain was recognized for his career “in promoting and facilitating the labor and social inclusion of people with disabilities, and acting as a speaker for the group around research and innovation in the field of mobility ”.