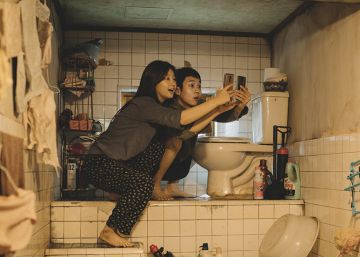 The cinephile news of the week is that Parasites, a South Korean film, has won the largest film award in the United States. To the full it has been commented that it is the first time that a production with dialogues in a language other than English has been imposed on the heavyweights of the most powerful industry in the world. It is still too early to know if this will be an isolated event or a symptom of a new trend, as well as to know what trend we are talking about, although it will surely have something to do with the new hegemony fostered by global production and distribution platforms. streaming. Last year, another “foreign” movie (now the “international” movie name has been officially changed), Rome, focused on a submissive and suffering domestic worker, subjugated by the rich family he serves, was about to win that prize. It is tempting to point out the parallelism and slightly force the metaphor, as the characters of Parasites they access the coveted universe of the upper class (Hollywood?) through the service door, although they do so with a completely opposite attitude.

That attitude, that impudence, is undoubtedly one of the reasons why, unlike the Cuarón movie, when talking about Parasites Criticism mentions not only the enormous social inequality and class division, but that almost proscribed expression: “class struggle.” And yet it has little to do Parasites with the collective claim of a different world and it does have a lot to do, instead, with another venerable social tradition, with that individual impulse (ista) to measure, to integrate into a higher social class and enjoy its privileges, which of All life has been called arribismo.

The coincidence of an industrialized society and a culture obsessed not only by social class, but by the external signs of belonging to that class, led to the figure of the arribista having its strongest representation in Anglo-Saxon literature from the second half 19th century The social unrest produced by the industrial revolution had in Dickens first a chronicler of the inverse movement, of the declining, of the sudden fall in poverty for reasons beyond the control of his characters (David Copperfield, little Dorrit, the protagonists of Desolate house). When Dickens portrays a careerist, like Pip in Big hopesHe does so with such tenderness that we hardly dare to give him that name, and his ascension on the social scale is as out of his control as the descent on the same scale of the other characters. Totally opposite is the other great upbeat character of the early Victorian era, the Barry Lyndon of W. M. Thackeray, yes, cynical and calculating.

As the armies of wage labor invade the urban belts, the fear of being contaminated by the irruption of that humanity that the upper class conceptualizes as impenetrable and animal adopts various literary forms, from the Frankenstein myth (which Franco Moretti says that It symbolizes the fear of the bourgeoisie towards the proletariat) until the police novel, which was born as a genre at that time. And the fascination, arisen from fear and curiosity, feeds the figure of the arribista, a man of the people with exceptional talents (of course, every talent of a proletarian, peasant, etc., will be exceptional by definition), which aspires to occupy a place which does not correspond to him by birth (as Jude the Dark, by Thomas Hardy).

In this uncertain world, in which an orphan like Heathcliff may end up owning Wuthering Heights, cultural marks of belonging to a class are continuously monitored. The arribistas are in permanent risk of being discovered, ridiculed or exposed. He betrays his dark skin, his rough manners, the kicks to grammar (the eponymous protagonist of Martin Eden), the incorrect pronunciation of German (Leonard Bast in Howards end), worn or inappropriate clothing.

The protagonists of Parasites, aided by modern technology and by the modern permeability of customs, they are practically infallible and do not make any of the mistakes of their predecessors. Only their body odor betrays them, the “poor smell”, as defined succinctly in the film, without any reference to their connotations of illness, lack of hygiene, overcrowding. Not only is it an “error” impossible to correct, but it is probably the only error that will never be an instrument of seduction. It will prevent the perfect integration of the perfect arribistas, which will not trigger a class struggle, but a collective massacre.

Rooted in the film and literary tradition of the climber or climber, Parasites separates from films clearly related to her, such as The servant, by Joseph Losey, because it is not a “climb”, but several. The fact that all the members of the family join the plot one by one is one of the keys to the humor of the film and the discomfort it raises. It seems that they could multiply to infinity, that any person, relative or not, could participate with the same skill in deception. And that is perhaps the most subversive and novel of the film. In the classic story, an individual arribista tries to reach a position he admires. For this he must imitate her with his talent, and that imitation is the best possible praise and legitimization of the social order. The luck of the arribista is justified by a meritocracy that in turn ratifies the values ​​that sustain the hierarchy. Orwell well said that no one would ever be believed to say he admired the working class until he saw him adopt the manners of the proletariat at the table.

If anyone can imitate the object of desire and if the difference between the original and the copy is something as intangible as a smell that only the privileged perceive, exclusivity and aura are devalued. That could lead, as Walter Benjamin dreamed, to a radical social change. But, as much as criticism invokes it, if the class struggle is not present, that devaluation may be just one more symptom of the new audiovisual hegemony.

Ana Useros She is a film critic and translator.