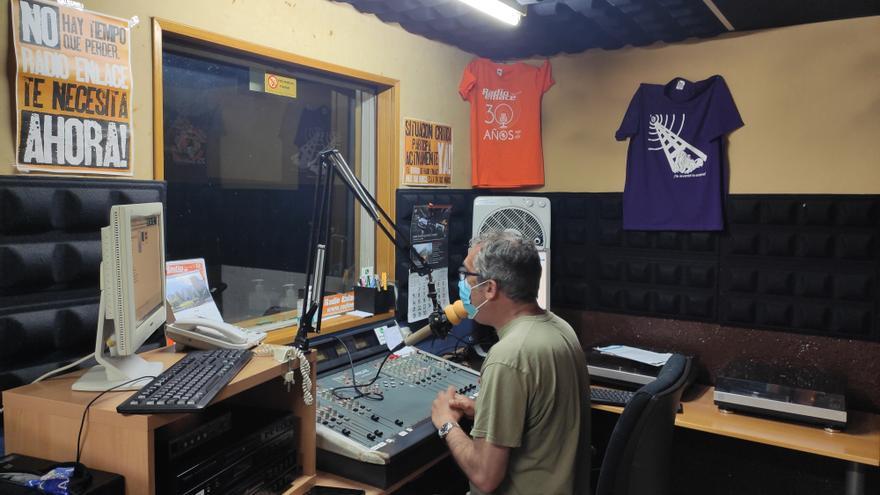 In a basement in the Hortaleza district, next to a park to which the classic beehive buildings of Madrid turn their backs, is the premises, shared with the neighborhood association La Unión, where Radio Enlace has worked for 32 years. Like every Wednesday, they are recording a program with the APROCOR foundation, with people of functional diversity. With the arrival of COVID, they went from a grid of 80 weekly programs to managing to maintain about fifteen, all from home. “We did not have the pandemic and we had ventilation and space problems,” explains Paco Aragón, representative of the station. Now they have been able to partially recover that presence and personal work that characterizes community radio stations: announcer, technician, editor and scriptwriter, all the same person.

Radio Enlace is one of the thirteen federated to the Union of Community Radios of Madrid (URCM) that populate the airwaves of the capital. “They are a claim to the right we have to communicate and be heard,” says Candela Rossi, president of URCM and participant in Radio Almenara (Tetuán) for more than 16 years. They are completely open and accessible spaces for the participation of the neighborhood, so that individuals and groups have a voice and are part of the fabric of the district to which they belong, receiving feedback from neighborhood and neighborhood associations. In Rossi’s words, “our goal is for people to get to know these spaces and experience them as their own”, so the partners carry out self-management work to tell their stories and make the station a “tool for social integration”.

Equipment, premises, electricity or cleaning need financing. Community radio stations are funded in two ways: membership fees and subsidies offered by the Community of Madrid, in addition to small amounts for training workshops in some cases. Radio Enlace, for example, the first model prevails. “From partners we can receive about 23,000 euros a year, from subsidies from the Administration about 8,000 or 9,000 euros and the workshops would be about 6,000,” says Paco Aragón. Radio Almenara, however, relies on subsidies, seeking to put the needs of its partners above and adapting to the economic capacities of each one: “Access to communication must be prioritized before being able to finance it,” says Rossi.

A third channel would be the one used by OMC Radio (Villaverde), which also implements capital injections from private foundations. “The partners make their contribution to be able to use the space and we also have both public and private financing, grants from the Madrid City Council to carry out these equality, youth, employment, health projects …”, indicate Alicia Barba Baños, president of the entity, and Marta López, one of the six workers on the payroll.

Different is the case of Radio Vallekas, which decided to abandon the institutional route and not ask for aid. “We abandoned this path because we saw that it requires an effort and dedication that, if the people who are here are not paid, can generate more problems than solve them,” says Álvaro Lorite, representative of the station, which was forced to close the 1 March after being evicted for non-payment of the rental of the premises. They had not paid for the quotas for eleven years. “They stopped paying because the rent was associated with a functioning structure” that required an injection of public capital due to the rise in rent, he justifies. Even so, they tried to negotiate with IDIMA (the landlord) since they understood that they were “providing a community service contemplated by the Constitution”, but they did not get a response.

Despite the fact that many of these stations were already broadcasting in the last century – for example, OMC was founded to escape compulsory military service and have a social occupation to protect conscientious objectors – during Carmena’s time at Madrid City Council they seemed to be living in the golden years of community radio. M21 was created, which, although it had a municipal figure, showed a more open-minded atmosphere towards the neighborhood and associative fabric. However, this was not the case for Radio Enlace, which describes this stage as “a very big mistake” and considers that “people were deceived.” In fact, they deny that he bet on them between 2015 and 2019: “They didn’t give us anything, we haven’t managed to get out of this basement with any game.”

Onda Diamante (Canillejas) shares the same opinion. They assure that they did not notice a difference with Now Madrid in the Casa de Correos: “We asked for a place that was available to carry the radio and one of the reasons for rejection was that we were illegal.” And it is that no community can have a defined legal form, they issue without a license. This is one of the WTO’s claims, which, unlike the rest, did notice some change with the previous Executive, at least on the social level. There is a preliminary draft for the General Law of Audiovisual Communication that would contemplate the community as legal means and with which, as Alicia Barba explains, each community would have to regulate and grant broadcast licenses.

It has nothing to do with the current situation. “The change with the Almeida administration is overwhelming, it has us right now in a situation of danger of existence,” says the president of the URCM. The representative of Radio Almenara accuses the current consistory of taking away their participation spaces. From several centrals they not only point to the PP of Almeida, but also to the influence of the extreme right: “Although it is not in an advantageous position in the City Council, Vox enters to fight the entire neighborhood and associative movement.”

Despite everything, the stories keep coming through their micros. The women leaders of Villaverde continue, as every Tuesday, recording their conversations for OMC Radio; a space in which a group of older women meet to discuss their problems from a feminist perspective. In Enlace, during a program carried out with the Hortaleza First Welcome Center, a young man told how he spent seven months in a CIE in the Canary Islands with no other resources than eating and sleeping, without distractions or methods to promote development. And in Vallecas, in the middle of confinement, battered women who lived with their attacker found in their broadcasts a way to support each other through songs. “Bertolt Brecht used to say that the important thing is not the number of listeners, but the number of messages”, Aragón sentenced, in the small underground study.