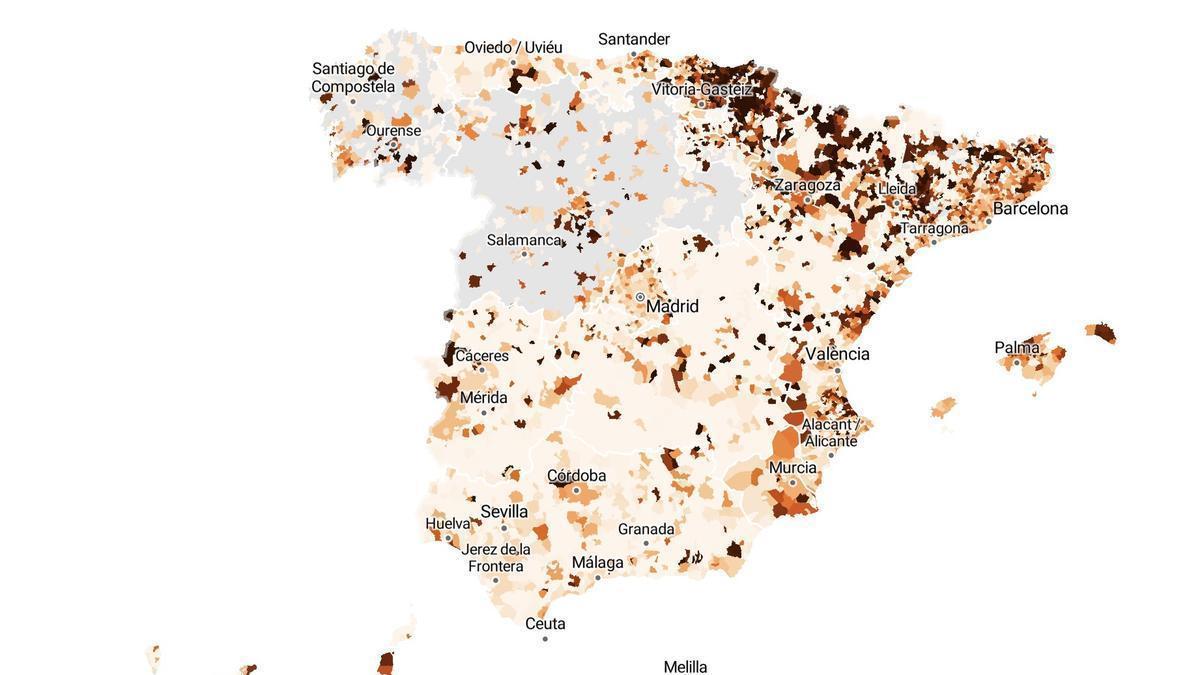 * Information updated with the latest data available as of November 30.

The new rise in infections with the arrival of winter has accelerated in the last month. At the national level, we surpassed 200 cases of incidence and a part of the territory registers higher incidents and increases in the fastest infections. These are the cases of up to 60 cities with more than 40,000 inhabitants where the number of confirmed cases has tripled (or more) in the last two weeks. Among them are the cases of Utrera, Huesca, Cáceres and Badajoz, where infections have multiplied by up to six in just 14 days.

Nine cities exceed the highest level of incidents in the new Health traffic light, which classifies infections above 500 cases per 100,000 inhabitants as very high risk, although other criteria must be added to this, such as the occupation of ICU beds or the number of hospitalizations. Huesca leads the municipal classification, with more than 1,000 cases, followed by cities such as Irún, Ourense, Benidorm or Donostia. These are some of the results extracted from the analysis carried out by elDiario.es from the data of the Health Departments of the 17 autonomous communities and the autonomous cities of Ceuta and Melilla. You can read more details about obtaining this data in the methodology.

At a global level, confirmed cases of COVID-19 are decreasing 📉 in 177 municipalities where 3% of the Spanish population lives, they are increasing 📈 in 1,392 localities where 80% of the population lives and they are in the plateau phase (the remain more or less the same as two weeks ago) in 48, where 2% live. The rest are very small municipalities where very few cases are registered - less than 5 every two weeks - or for which there is no information available - representing 15% of the Spanish population.

In total, the figures collected add up to millions of coronavirus cases in which the municipality of residence of the infected person has been identified. Of the 17 autonomous regions analyzed, Madrid is the city with the most infected people detected in a single municipality. However, the municipalities with the highest incidence rate (cases per 100,000 inhabitants) are small localities in which an outbreak can affect a larger proportion of the population.

The Balearic Islands initially refused to share their data, although in the end they published it. Extremadura, under the same criteria, initially only published 8 most populated municipalities in the region. Now it publishes the figures even by local entities, villages and districts. Castilla y León is only publishing its figures for municipalities with more than 1,000 inhabitants and La Rioja is not publishing now the figures for towns with fewer residents. They are not the only cases, practically half of the regions refused to publish their figures, arguing that they wanted to avoid the stigmatization of specific municipalities. Today, they all publish their data on COVID-19 cases by municipality.

Precisely, these data are essential to combat an epidemic: they allow detecting sources of contagion and acting accordingly, providing more information to local administrations and regional governments of neighboring communities, and facilitating the analysis of the impact of the epidemic.