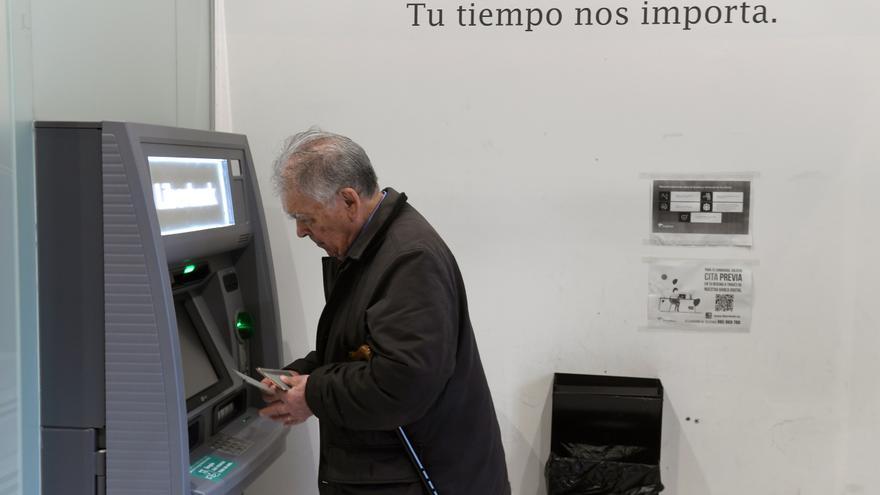 "Sunday comes and you sleep badly because you know that on Monday you start from scratch." M. works in a branch of one of the large entities in the country. He has been in the sector for almost two decades and acknowledges that since he started, "everything has gotten worse." They have more and more work because other offices have closed and hundreds of colleagues have left in the ERE last year. Added to this increased workload is a continued increase in commercial pressure from his superiors to get customers to contract more products, in a context of low profitability of traditional business. "The burden is horrible," he points out, lamenting that he could not sign up for the last ERE of his company.

The testimony of M., a worker who prefers not to be identified, represents a generalized situation in the banking sector that other employees consulted confirm. Since the last financial crisis, more than 100,000 jobs have disappeared in the sector and half of the branches. Over the past year this volume of layoffs has accelerated. The different ERE add up to some 19,000 outputs, which have been formalized over the past year and will continue over the coming months. It has coincided with a path towards the digitization of the banking offer and with a very deep problem of profitability in the sector. And also, the pandemic.

A perfect storm for workers who have stayed in their banks. Especially for those who are facing the public. M. recounts a typical day in his office. First thing in the morning, she meets with his boss, the branch manager. This exposes his objectives, which usually consist of having three appointments or calls in which to close the sale of a product. Throughout the day, she is repeatedly pressured to control the achievement of these goals. "There are days when you only plant and don't sell, and if you go three days without a sale, you receive notices," says this worker.

This continued pressure has led to situations of high stress, depression and sick leave, as confirmed by various union sources. "There is a very brutal stress," says another worker from a large entity in the country. "To compensate for low interest rates - an issue that weighs down banks' profitability - they are turning to commercial pressure, and it's an explosive cocktail for workers," she adds. This is the key pointed out by the different employees consulted. "What they like most now are funds and insurance," says M. "They go fast."

This is what the figures say and that confirm this drift of the sector. The main source of income for banking is what is known as interest margin —those who enter, minus those who pay— which come from traditional commercial activities such as granting loans. However, with low interest rates, last year the six large banks in the country (Caixabank, BBVA, Santander, Sabadell, Bankinter and Unicaja) saw this income stream fall by 3%. The bank has focused its strategy, therefore, on new ways of income. This is where funds, insurance or pension plans come in. These products generate commissions. Thus, while interest income fell in 2021, commission income soared by more than 10%, already accounting for 35% of income, a much more relevant portion than before.

On February 22 there will be mobilizations throughout the territory of the CaixaBank staff to denounce this situation that the staff is experiencing. C., an employee of one of its branches in Madrid complains that not only do you have to place insurance or an investment fund, but you also have to sell televisions, with "insufferable" daily pressure. Different union sources indicate that in the rest of the entities conversations are being held with the respective managements to try to address this problem for the workers. There are cases, such as in Santander, where the preparation of an independent psychosocial report is being prepared to find out the situation of the employees, as reported by the CCOO, which they hope will be launched in the spring.

"The situation at CaixaBank can be extrapolated to all other banks," explains Victoriano Mirabete, head of banking at UGT. "Banks have become multi-product sellers, now they don't just sell mortgages but there is pressure to sell dozens of products," he points out. Nuria Lobo, head of the financial sector at CCOO, points out that these products are always sold in compliance with the new regulations for the marketing of investment vehicles —which did not exist in the last financial crisis— but that this does not prevent the pressure to achieve objectives are very high. "If you don't sell, pressures increase, so you can't work, because in addition to marketing products there are other tasks we have to do," explains Lobo.

This situation has had a derivative during the past year. The five large ERE that were presented (Santander, CaixaBank, BBVA, Unicaja and Sabadell) agreed to add some 15,800 casualties. However, the information that has been provided by the request unions far exceeds, reaching more than 24,000. While it is true that they are procedures with conditions well above other sectors, the unions also speak of a boredom in the templates. "A few years ago, 95% of these exits were of workers who linked with their retirement, now more than a third in some entities are exits of young employees, under 50 years of age," Mirabete points out.

"I've been in banking for 25 years," explains Lobo, "and when I entered it was a prestigious profession, many students wanted to work in the sector when they finished their degree, now people want to go out in the ERE, look for another job alternative or prepare oppositions ". M., the employee who recounts first-hand the pressures in the offices, acknowledges that "we all did accounts when the conditions of the ERE were published in my bank." "A colleague who worked with me signed up and now she lives very happy," she adds.

The problem has become more apparent at a time when face-to-face customer service in banking has been put back on the table. The campaign of different groups of older people and consumer organizations to improve the treatment given to older and less digitized people. The proposal has been accepted by the Bank of Spain and the Government, who have pressured employers to improve their proposals to solve the problem. These initiatives are focusing on extending service hours for these groups or improving customer service systems.

However, the templates maintain their doubts about the path towards digitization that the banks have undertaken. "The work in the offices has not decreased, in fact it has increased with more clients per branch and with fewer workers," Mirabete points out. "No matter how much digitalization is published, the workload has not decreased, there is more concentration of work in fewer people," Lobo agrees. Although it is not a problem as a result of last year's ERE, since beforehand it was already warned of the lack of staff in the offices.

This places workers between two pressures. On the one hand, that of their superiors, urging them to close sales and product contracts on a daily basis. On the other hand, customers who see that the service is getting worse and worse and have a more difficult relationship with their bank, having to make prior appointments or waiting in long queues at the door of their branch. M. relates that insults are received "daily". Although beyond these more tense moments, he admits that he "perfectly understands customers" who are angry with the treatment they receive. "I see well the problems we have and if I didn't work at this bank, I wouldn't be a client of the entity," she points out.

Tags: b, banking, beast, expensive, remain, stress, there are, workers, You are