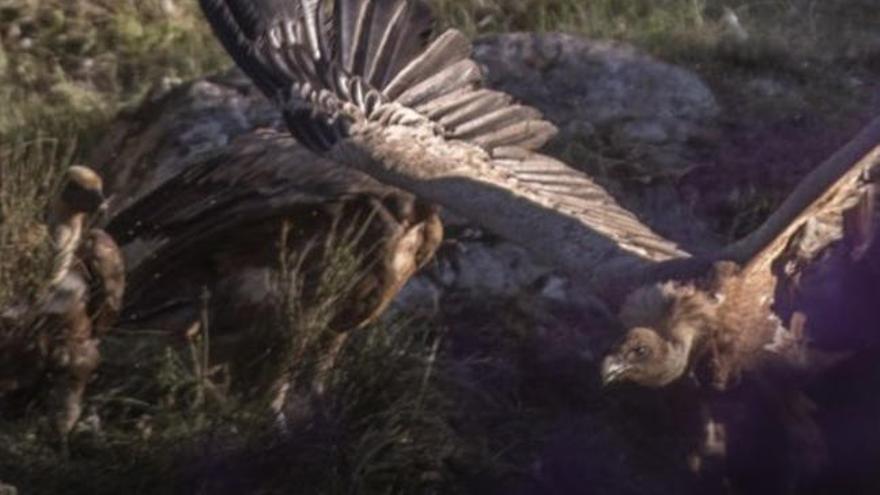 A rancher from Zamora surprised a flock of vultures devouring a sheep just calved In the town of Fermoselle fornillos, in a new attack of this type in the province.

In the video you can see the exact moment in which the farmer witnesses how the group of vultures attack the animal and how they flee when they notice their presence.

Faced with this type of attack, just this Wednesday COAG in Castilla y León has demanded the Ministry of Development and Environment of the Board to compensate for vulture attacks on livestock As four autonomies already do, after reporting a farmer from Zamora, he prepares a claim, based on article 106 of the Constitution, after being eaten a cow and a calf by these ghouls.

In a statement, the union indicated that the rancher of Almedia de Sayago received on his farm on March 11, 2019 the visit of a couple of vultures who indicated that they took advantage of the haul that a cow was passing through, it was giving birth, to pounce on her and devour her, as well as the fruit of her entrails, the calf. In this sense, the union explained that vultures always attack animals in moments of greatest weakness and advanced that the farmer will request protection from the Administration, because it is said that it has to answer for the consequences of its decisions, “both normal as abnormal. ”

“Their decisions, in this case, are to ensure the management of the carcasses of the cattle that have to be removed from the field as a measure to prevent BSE,” he said. In addition, he recalled that the Board does not grant aid to ranchers affected by vulture attacks because it considers that there is no relationship between their activity and the damage suffered by the peasant.

On the contrary, COAG recalled that the Common Attorney, Tomás Quintana, went to the Ministry to request that aid be granted to compensate for the damage caused to the farmers by these scavengers. Furthermore, these are already granted in four autonomous communities: Madrid, La Rioja, Castilla-La Mancha and the Basque Country.

In Castilla-La Mancha, for example, Agriculture advocates reconciling the existence of vultures and cattle Therefore, it stipulates support for the attacks of 1,500 euros for goats and sheep and 2,000 for vaccines. In Castilla y León, according to the www.coag-cyl.org portal, during 2019 there were 2,579 attacks by wolves alone throughout the Community, which ruined 3,774 head of cattle. The bill that the farmers had to assume was two million euros. In addition, he added that the protected animals caused a traffic accident every hour on the roads of the Community.

Likewise, he indicated that all this “Huge” problem for farmers comes from a “lousy” management of wild fauna by the regional administration, since it denounced that it does not “effectively” control the populations to prevent damage, and that, when the damage has already occurred, it does not adequately compensate the ranchers.

Finally, the union recalled the damage caused by the bustard and requested that the aid be extended to the entire territory of Castilla y León, and not only within the limits of the Villafáfila Nature Reserve.