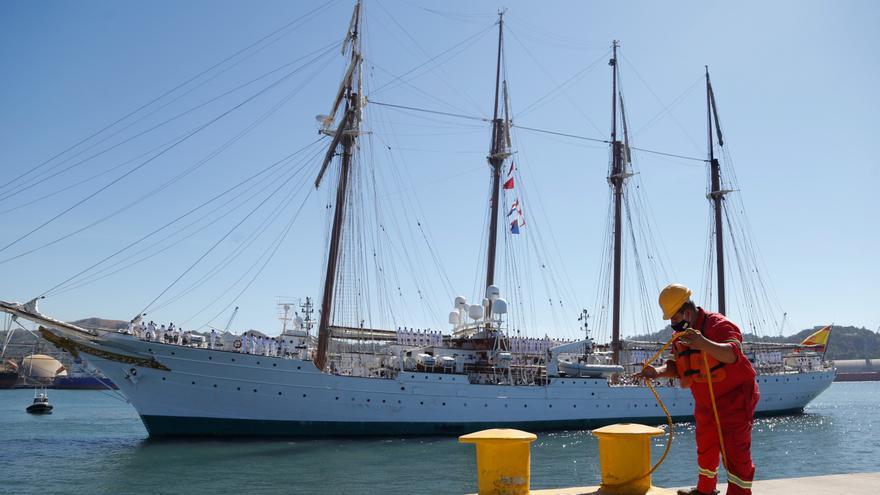 Bangkok, Mar 16 (EFE) .- The Spanish Navy training ship Juan Sebastián Elcano arrived on Tuesday on the shores of the Philippines, at the same place and on the same date that 500 years earlier the expedition led by Fernando de Magellan in the first circumnavigation, a feat that changed the perception of the world.

The ship anchored in the morning in the waters of Guiuan, on the island of Suluan, in Eastern Samar, the first point in the Philippines that the sailors, still commanded by the Portuguese Magellan, sighted from the ship, although they did not descend, a 16 March 1521.

As happened five centuries ago with the expedition, the crew of the Juan Sebastián Elcano will not go ashore and no one will be able to board the ship, not only in Guiuan, but also in the rest of the stops along the Philippine coast due to the restrictions imposed. due to the covid-19 pandemic.

"There will be a coincidence of time and space, by exactly replicating the route that the expedition made 500 years ago. And we will remember that feat with the inauguration of several commemorative monoliths that marked the beginning of the Spain-Philippines relationship", The Spanish ambassador to the country, Jorge Moragas, said in telephone statements to Efe, who welcomed the school ship in Guiuan.

There will be inaugurated on Thursday, March 18, a commemorative plaque in an act, with the Spanish ship in the background, in which the Philippine president, Rodrigo Duterte, is expected to attend.

"They are historical events of great relevance, also feats that changed the course of humanity. That is why we want to celebrate them and we are honored to be able to do so with the Philippine authorities," Moragas said.

After stopping in Suluan, the school ship will set sail for the neighboring island of Homonhon, where the expedition crew descended to the beach, set foot on Philippine soil for the first time and made the first human contact with the local tribes.

To commemorate this historical milestone, the Embassy of Spain in the Philippines has also organized together with the Instituto Cervantes and Casa Asia a series of conferences with historians and experts in this episode that will run until June, in addition to the exhibition "The longest trip" , which will open in May at the National Museum of the Philippines.

THE DESTINY OF MAGALLANES

The ship's route will then continue to the island of Cebu (March 20-22), where Magellan and his men also went, a course that marked the destination of the expedition.

Before carrying out the first baptisms in Cebu, the missionaries of the expedition already officiated the first mass on the small island of Limasawa, so these days the 500 years of Christianity is also celebrated in the Philippines, one of the legacies of the Spaniards. that they value the most since it is the country with the most Catholics in Asia, 80% of its current population.

Magellan was killed in combat with the indigenous people of the Philippine island of Mactan and was replaced by the Spanish Juan Sebastián Elcano, who completed the first circumnavigation when he arrived on September 6, 1522 at the port of San Lúcar de Barrameda (Cádiz).

In honor of the Basque navigator, the Spanish Navy training ship that today arrived on the Philippine coast was inaugurated in 1928, a 113-meter-long schooner, the third largest ship in the world and which is making its tenth round of it.

Juan Sebastián Elcano has spent almost three years traveling the same route around the globe that 500 years ago made this expedition financed by the Spanish King Carlos I, a journey in which only 17 of the 239 people who started it survived.