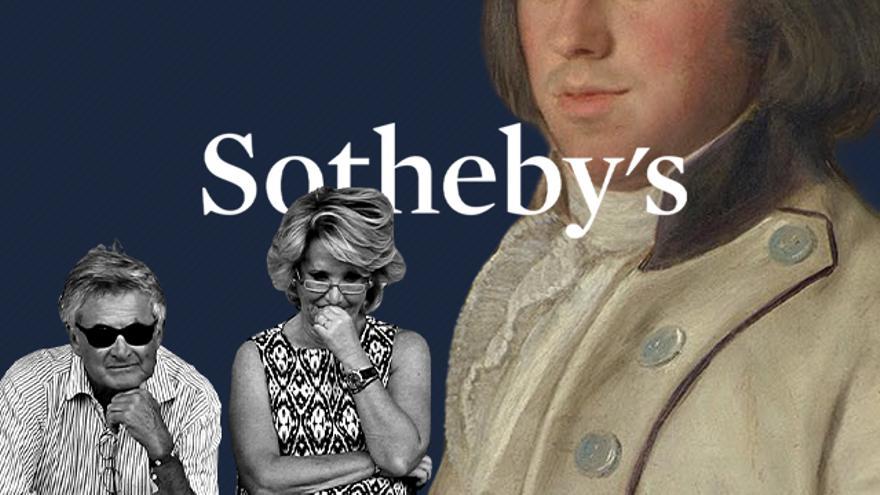 On September 21, James McDonald, director of Sotheby’s London and responsible in that company for the private sales of old masters, will testify as a witness in the court of instruction 26 of Plaza Castilla, in Madrid. You will have to clarify the context of the appraisal and sale of the portrait of Valentín Belvís de Moncada y Pizarro, Marquis of Villanueva del Duero, painted by Francisco de Goya in 1800. He was the one who put the price on the painting and confirmed that it was a Goya.

The Sotheby’s expert recommended not declaring the painting as an Asset of Cultural Interest (BIC) due to the difficulties in selling it and the associated taxes. It set a minimum price of seven million euros. A few months later, the portrait was sold by Esperanza Aguirre and her husband, Fernando Ramírez de Haro, to businessman Juan Miguel Villar Mir for five million euros, two less than the price set by the expert and without declaring it as BIC, in an operation that now he is investigating the courts for possible tax fraud.

A brother of Fernando, Íñigo, has sued against the husband of the former president, against Aguirre herself, against Villar Mir and against the executor who certified this operation for simulating a “verbal donation” of Goya’s painting and other works of art for a total value of 8 million euros. Íñigo accuses Fernando of appropriating that inheritance and defrauding the treasury. It also denounces that Sotheby’s assisted its client in the alleged tax evasion in the sale of the masterpiece that does not yet exist for the Ministry of Culture or for the Community of Madrid, since it has not been declared as a Site of Cultural Interest (BIC) almost ten years later.

The dealer will specify before the Spanish courts what was the participation of the international auction house in the operation carried out in July 2012. After Juan Miguel Villar made the deposit of five million euros, the Community of Madrid facilitated the permits for shoot down the set of historic buildings in Canalejas (Madrid), so that the businessman could build a hotel, apartments and a luxury shopping center.

“The risk of applying for an export license is that the painting is declared an Asset of Cultural Interest (BIC), which would make it much less attractive to potential buyers within Spain due to the various obligations that accompany the ownership of a protected painting, as well as the not inconsiderable transmission taxes owed at the time of sale “, said McDonald in the appraisal report to which he has had access elDiario.es.

The Sotheby’s expert will have to clarify this point that he refused to answer to this newspaper. Sotheby’s London did insure elDiario.es that they facilitated the sale, but that they did not sell the work itself. In the report delivered to Esperanza Aguirre’s family, the auction house acknowledges that its rate includes the risk of loss or damage, transportation, legal work, photography, meeting with experts in their offices, as well as income. of the payment once sold.

The commission for a private sale of this level, as explained by McDonald, is 12% if the amount of the sale exceeds 700,000 euros. If not, the house would take 25% from the private sale. However, the merchant offered the former president of the Community of Madrid a discount. “As a sign of my enthusiasm for the painting,” he argued. He left the commission for the sale at 10% on the price, that is, more than half a million euros, compared to the 600,000 that it meant to pay the usual rate.

McDonald, then director of antique painting sales at Sotheby’s auction house, had flown to Spain to appraise the painting in person. Goya’s painting hung over the fireplace on the first floor of the mansion in the center of Madrid where Fernando Ramírez de Haro’s mother lived. Macdonald recounted to Ars Magazine that he immediately realized it was a masterpiece.

Aurora Zubillaga, general director of Sotheby’s Spain, has decided not to answer the questions of this newspaper about the imminent declaration of James McDonald in the Spanish courts in the case that investigates the alleged tax fraud. The prosecution also asked the judge in the case for the statement of Zubillaga and Manuela Mena, head of conservation of the 18th century and Goya at the Prado Museum, who was the one who certified in the Prado’s own workshops that it was a painting by the Aragonese .

Sotheby’s facilitated the private sale of the portrait made by Goya and sought the opinion of the main experts to confirm its attribution and seek, from that moment, a buyer for the painting. James McDonald called Manuela Mena and Juliet Wilson – the Goya expert who works with Mena – to examine the work and the specialists confirmed that the painting was “an unknown portrait of Goya.” Once he had the “yes” from Mena, Sotheby’s valued the price of the painting at a minimum of seven and a maximum of eight million euros.

It is not the first time that Sotheby’s has been suspected of assisting its clients in an alleged tax evasion. New York Attorney General Letitia James sued Sotheby’s in November 2020 for defrauding city taxpayers. According to his research, the auction house helped a millionaire client evade taxes to boost his own sales. Letitia James claims that Sotheby’s made it easy for its client to create and use tax exemption certificates that did not apply to them. He was a collector, not a dealer to be resold. In this way, between 2010 and 2015, one of his millionaire clients evaded state and municipal taxes on $ 27 million in art purchases. The Wall Street Journal identified the client as Isaac Sultán, a Venezuelan businessman and president of Miami-based Atlantic Feeder Services USA.

“Millionaires and billionaires cannot be allowed to evade taxes while Americans pay their fair share every day,” said Attorney General James. “Sotheby’s broke the law and stripped New York taxpayers of millions of dollars just to increase their own sales. This lawsuit should be a clear message so that it is understood that no matter how wealthy and influential you are, no one is above you. the law, “James added. In fact, an investigation by the Attorney General’s Office has found that Sotheby’s helped the owner hang the paintings he was supposed to trade in in his apartment.

Sotheby’s informed the collector, according to the Attorney General’s office, that he could use a resale certificate and helped complete the certificate, “including the false statement that he was an art dealer although, in reality, the collector had not told Sotheby’s that he was an art dealer and Sotheby’s knew that his client’s business was shipping. ” That was not the only fix that the auction house made with this buyer according to the prosecutor’s account: in 2015 it had already accepted three other “equally false certificates provided by Sotheby’s employees.” And this despite “overwhelming evidence” that the buyer was not a dealer but bought art for personal use.

Sotheby’s lawyers argued in late 2020 that the attorney general only wanted to “punish” rather than “recover the sales tax,” because the state reached an agreement with the buyer in 2018 to compensate the non-payment of tax for the works acquired. They also pointed out that instead of executing “a conspiracy to evade taxes,” the Sotheby’s manager was simply “poorly trained.”

Sotheby’s and Christie’s, the other major art auction company, are fighting for number one in their industry. Between 2013 and 2018 the firm of François Pinault exceeded Sotheby’s annual income. The hardest blow came in 2017 when the obscure Dimtry Ryboloulev – president of AS Monaco and who Forbes estimates a fortune of $ 8.5 billion – handed over the sale of Salvator Mundi to Christie’s. The Russian businessman had bought the dubious Leonardo da Vinci from a Swiss broker for 115 million euros in 2013. On November 15, 2017, Christie’s sold the painting at its Rockefeller Center headquarters in New York for almost 380 million euros. It is the most expensive painting in auction history and doubled Pablo Picasso’s previous record.

It was acquired by an anonymous startup, classified as UHNWI (Ultra High Net Worth Individuals or Individual with Very High Net Worth), who ended up being revealed as the prince of Saudi Arabia Mohammed bin Salman. Now the Louvre Museum, the highest institutional authority on the Italian painter’s work, doubts the attribution that the National Gallery in London accepted.

Sotheby’s reacted with a series of strategic changes, mainly to broaden its pricing policy and reduce online sales rates. Thanks to these measures, Sotheby’s, directed by Patrick Drahi, surpassed Christie’s total sales in 2020 by reaping 5,000 million dollars, 16% less than in 2019. The latter achieved 4,400 million dollars, a fall of 25% compared to the year previous. Most of the income for both houses comes from live auctions, which in 2020 were drastically reduced due to the coronavirus pandemic. Another part of its profits come from private transactions, out of the public eye and without various offers, between two collectors.