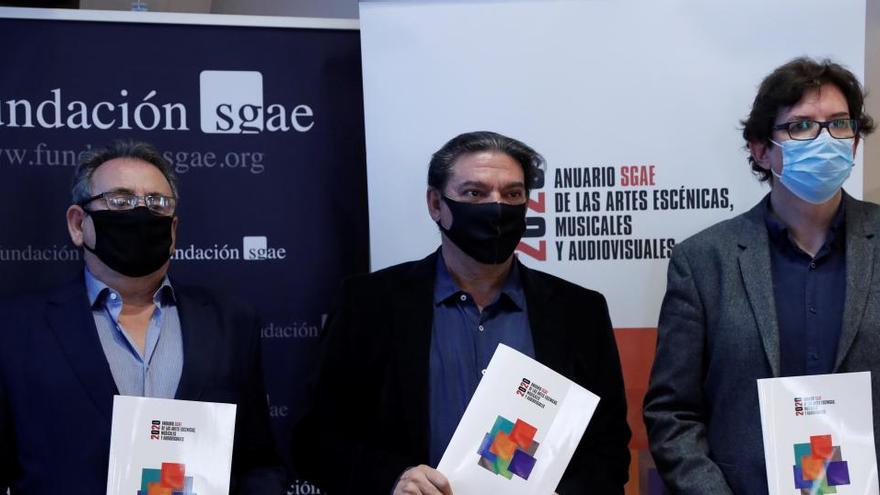 He last year will mean the “closing of an upward trend” waiting for the end of 2020, according to the Sgae Foundation, which also hopes that the crisis generated by Covid-19 in the sector Covid-19cultural

This was expressed this Wednesday by the general director of the Sgae Foundation, Rubén Gutiérrez, during the presentation of the Yearbook of Performing, Audiovisual and Musical Arts of 2019, which shows positive figures, among which highlights the 1% rise in the number of film sessions and 7.5% in the influx of spectators and 6.3% in the collection of this sector.

An increase that has been celebrated by Antonio Onetti, president of the General Society of Authors and Editors, although like Gutiérrez he has quarantined him for the future.

“Presenting this yearbook under normal conditions would have been a joy because the data for 2919 were quite encouraging since they supposed a recovery of most of the cultural sector similar to the year 2010, which put us in a recovery after the 2008 crisis that was quite good to be able to continue improving the situation, but appeared the pandemic “, has lamented.

Thus, during 2019, theater was once again the subcategory with the highest representation within the performing arts: it concentrated 93.1% of the performances, 88% of the spectators and 86.8% of the collection.

Regarding the oscillations of these three main variables between 2019 and 2018, the theater had increases of 1% in the offer, 1.7% in attendance and 1.3% in collection.

For the third consecutive year, dance has a positive trend and compared to 2018, had increases of 2.4% in the number of performances and attendees and 1.7% in the collection.

And in opera and zarzuela, according to the document, increases are also observed in the three indicators: 5.3% in the offer, 4.5% in the number of spectators and 1.6% in the collection.

Likewise, recorded music experienced an increase of 7.2%, “a fact that had not occurred in the last decade”, and the digital market, faithful to its upward trend, obtained 28.6%.

Classical music was also with positive percentages in our country in 2019, with a 3% increase in the number of concerts performed, attended by 3.5% more spectators and a 3.5% higher collection was obtained.

With growth also, but not as much as classical was popular music, which, without taking into account the macro festivals, the increase in attendance and collection was 1.8%; However, if large events are also taken into account, the influx rose to 1.9% and revenues reached 6.8%.

In the analytical part of the cinema, according to the yearbook, 2019 was the best year since the crisis of 2014 and 2015, when in Spain movie tickets were recorded at 21%: an increase of 1% in the number of sessions, 7.5% in the number of spectators and 6.3% in the collection.

“In principle, the Covid crisis should be a temporary crisis if it does not generate more important effects that are the possibility that this crisis begins to turn into problems of a structural nature, because activities such as those dependent on the private sector begin to close, that is, movie theaters or concerts, “Gutiérrez warned.

For its part, the physical video game market continued to decline with a fall of 11.3% compared to 2018.

According to Onetti, for the cultural sector to face the crisis generated by the pandemic, the items that will come from Brussels funds will have to be “really proportional” because otherwise if the current “collapse” is prolonged it will be “very difficult to put Culture back on its feet.

“It seems pathetic to me that some justify the escraches. It is a lack of respect for the other “