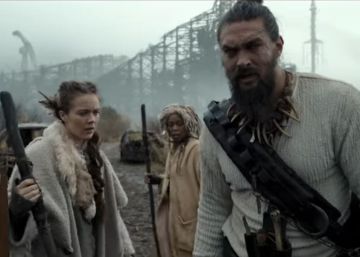 From November 1, Spanish viewers will have a new content platform for streaming: Apple TV +. The apple company launches that day worldwide in 100 countries series, programs and documentaries for five euros a month. The new service joins the contents in rental or purchase mode that the company already had. For the launch, Apple will come out with a dozen original series and documentaries and has confirmed the premiere of many others for the coming months.

The big bet since the beginning of Apple TV + is the series The morning show, which tells the ins and outs of a morning television show with Reese Witherspoon, Jennifer Aniston (both produce too) and Steve Carell in front. Alena Smith (The affair) has created a black comedy around the 19th century writer Emily Dickinson which bears his last name as a title. The poet is embodied by actress and singer Hailee Steinfeld.

With airs of blockbuster arrives See, written and produced by Steven Knight (creator of Peaky Blinders) and directed by Francis Lawrence (The Hunger Games). Starring Jason Momoa (Khal Drogo in Game of Thrones) and Alfre Woodard, this fiction is set in a post-apocalyptic future in which the human race has lost the sense of sight. Also science fiction is For all mankind, devised by the creator of Galactic Battlestar Y Outlander, Ronald D Moore, who imagines what the world would be like today if the Soviets had been the first to reach the moon and the US had not abandoned the space race.

Apple has taken special care for its launch of children's programming with three offers. The first is an animated series of Snoopy in which the famous dog and the group of children created by Schulz in the fifties travel to space. The second is The ghost writer, a remake of a fiction of British mystery of the nineties designed to encourage reading in children. The third is Helpsters, a sort of Sesame Street (from the creators themselves) inhabited by monsters whose mission is to help solve problems.

The documentaries will also be part of Apple TV +'s initial offer with the film Queen of elephants, which follows the matriarch of a pack on a journey in search of water. Out of fiction, Apple signed the presenter Oprah Winfrey, which always carries millions of spectators wherever it goes. The television star premieres on the platform with a talk show about books.

The company has not given new details of the projects prepared by Steven Spielberg and J. J. Abrams, but has announced upcoming releases, without date, as Servant, a thriller by M. Night Shyamalan, Truth be told, with Octavia Spencer and Aaron Paul around the world of podcasts on real crimes; Little america, with stories of immigrants, The banker, a film starring Samuel L. Jackson and Anthony Mackie about two black entrepreneurs of the fifties and Hala, a film about an American Muslim teenager.

Apple launches its platform two weeks before Disney yours in the US (in Spain there is no confirmed date) and will offer the possibility of seven free trial days.