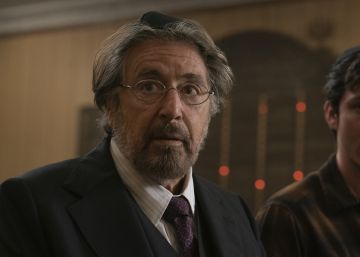 2020 will mark a new record in the number of fictions, which already in 2019, only in the US, exceeded the 500 series premieres made there. That at a time when digital platforms are betting on international production in a big way.

In Spain it will be the year in which fiction explores ETA terrorism, whether in Homeland (HBO Spain) the adaptation of Fernando Aramburu's novel or The invisible line (Movistar +)by Mariano Barroso. The fantastic series of Alex de la Iglesia will also arrive 30 coins (HBO)the policeman Unit (Movistar +), Neboa (The 1), The fence (Antenna 3), Mothers (Telecinco), Poison (from The Javis, In Atresplayer Premium) or HIT (The 1), among many. They will come back too Vote Juan (TNT), The ministry of time (The 1), Live without permission (Telecinco), Shame (Movistar +), and The jetty (Movistar +).

The main novelty in the Spanish market will be the landing of Disney + on March 31, 2020. He will do it with two series of Star wars already released in the US by then: The Mandalorian (acclaimed by some followers of the saga) and a new installment of the animated The Clone Wars In autumn the platform will premiere Hawk and Winter Soldier Y Wandavision (about the Scarlet Witch and Vision), with the characters of The Avengers of Marvel, universe that will say farewell this year its longest-running title, Agents of SHIELD. With a date to be determined, the new platform will also offer the return of Lizzie McGuire, Monster at Work (which retrieves characters from the Pixar movie SA monsters.) and the new Teleñecos, Muppets Now.

Another newcomer, Apple TV +, has renewed its main bets (The Morning Show, See, Dickinson, For all mankind ...), but it has not confirmed whether the second seasons will be available in the coming months. Yes the new version of Amazing stories, Produced by Steven Spielberg and renewed by the creators of Habia una vez.

Syfy will premiere next week in Spain Evil, new fiction of the creators of The Good Wife, AXN Lincoln Rhyme, about him Bestseller The Bone Hunter and TNT, Snowpiercer, based on the Bong Joon-Ho movie (Parasite). Among the great titles to find chain in Spain is Apocalypse (new version of Stephen King's book), Belgravia (from the creator of Downton Abbey), And, the last man, based on the homonymous comic, The Staircase, for which its protagonist, Harrison Ford, will take the highest salary on television, and Nine Perfect Strangers, from the author of Big little lies and again with Nicole Kidman. There is also no destination for new Table for five Y High Fidelity.

HBO will offer the adaptation of Stephen King The visitor (January 13th); Run, from Phoebe Waller-Bridge; Avenue 5 (January 20), from the creator of Veep; The conspiracy against America (March 17), by David Simon; Mrs. America, with Cate Blanchett; The Undoing, with Nicole Kidman and Hugh Grant, and a new Perry Mason.

Amazon Prime Video is about to start shooting in New Zealand from its very expensive Lord of the Rings, with J. A. Bayona, by 2021. It has pending before the premiere of Hunters, with Al Pacino, Temperance (adaptation of the novel by María Dueñas), Treadstone (January 10) and Star Trek: Picard (24).

Netflix, which has started the year with a series on a skater and a Christmas special on a gay Jesus Christ, will intensify its strategy of releasing a handful of fictions per week. We will see the lively Jurassic World: Camp Cretaceous, the adaptation of the comic Locke & Key (February 7th), Bridgerton, his first collaboration with Shonda Rhimes, or Hollywood, in which Ryan Murphy (which has pending Ratched, on Someone's nurse flew over the cuckoo's nest) will honor the mecca of the cinema of the forties. The indefatigable producer, in addition, will return with American Crime Story, this time focused on the scandal Clinton / Lewinsky.

Then there are the fictions that return: Larry david (HBO), The Boys (Amazon Prime Video), Outlander (Movistar +), Grace and Frankie, Narcos: Mexico (Netflix), Babylon Berlin, Better Call Saul (Movistar +) or Fargo (Movistar +). Westworld He returns with his third installment. In Spain on HBO there will be Succession, Euphoria Y Killing Eve. On Netflix they stand out Paper house (April), After life (the comedy of Ricky Gervais), Elite, Sex Education Y The alienist. The question is whether new deliveries of Stranger Things, The Crown (already shot) and The Witcher or if they will be left by 2021.

In between the hundreds of premieres there will also be series that say goodbye in 2020. One of the most veteran is Homeland (Fox, in February), with eight seasons behind him; The cable girls (Netflix), How to defend a murderer (AXN), Blindspot (AXN, in summer), Arrow, The 100 (Syfy, in spring), Lucifer (Netflix), Supernatural (AXN), Will and Grace (Movistar +), GLOW (Netflix), the Canadian cult classic Schitt’s Creek (Movistar +), the veteran teenage drama For 13 reasons, comedy about heaven and hell The good place (Netflix), Vikings (TNT) and successful comedy Modern Family (the last installment is already seen on Fox). Only in January Netflix will end with BoJack Horseman Y Ana of the green tiles. Supernatural Y Criminal minds (AXN) will conclude that 15 seasons have been enough.