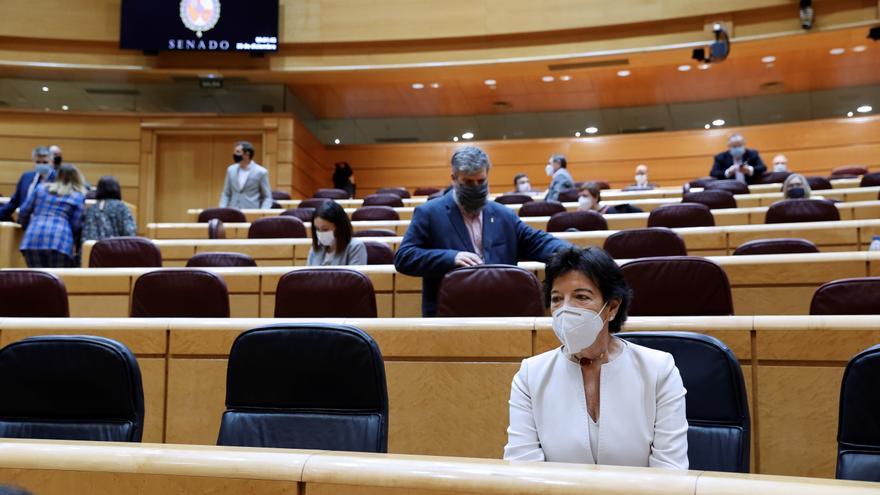 The parliamentary process is over and the Celaá law is only pending publication in the Official State Gazette to become the current educational law. At 18.04 this Wednesday, the Senate just approved the Lomloe with 142 votes, 112 against and 9 abstentions (two votes were missing). As the rule has not been modified, it should not go back to Congress and it has already been approved. The PSOE, ERC, PNV and Más Madrid have voted in favor. The PP, Vox, Ciudadanos, the PRC and the PAR have voted against.

The PSOE has used the majority formed by Catalan and Basque nationalists to reject the more than 600 amendments that the opposition groups had presented to the norm, which has earned it the reproach of the rest of the groups in the chamber, including some like Más Madrid who has voted in favor. They have also spoiled the speed of completing the process, without listening to the educational community on this occasion. The PSOE argues that these procedures were already carried out when the text was presented for the first time before Congress, which is now one year old (it was in the previous legislature). In any case, Spain already has its eighth educational law and the Lomce is taking its last breaths.

The Minister of Education, Isabel Celaá, has expressed after the vote her “deep emotion” for the approval of the rule. “We have managed to fulfill the commitment that the Cortes assumed seven years ago that the first time they had the first thing they were going to do for education was to repeal the Lomce, which was an exclusive, segregating and elitist law,” he said. In return, now Spain has the Lomloe, “which is committed to the development of all people so that they reach the maximum of their potential, a law for all, charged with the future.” According to the minister, where the Lomce “had an obstacle course, walls and double paths”, alluding to the obstacles it placed for students to advance through the system, the Lomloe “means opening a great avenue of opportunities.

The new education law introduces new features on several fronts. The most controversial have been those relating to the role of the concerted school in the system. Roughly, Lomloe aims to achieve a more balanced distribution of students between the public and concerted network and it establishes that the state-owned schools will be in charge of guaranteeing the educational offer. It also limits certain maneuvers that have been carried out, such as the transfer of public land to subsidized centers or the possibility of subsidizing schools with public funds that separate their students by gender. And prohibits the famous quotas. These changes have been interpreted by the employers of private centers supported with public funds and Catholic families as an attack on his model, and they have taken to the streets to protest against these modifications.

Another aspect that has raised the most blisters has been the modifications related to special education. The Government is committed to the Celaá law to influence inclusivity and encourage more students with disabilities to attend ordinary centers. Part of the sector of special centers maintains that these changes threaten special education and even that they will end its closure, a fact repeatedly denied by the Government (and that does not appear in the law).

At an educational level, the law will prohibit repeating a course more than twice during the compulsory stage (up to 4th of ESO) and will allow students to promote the course and holder with failed subjects, a fact that has been interpreted by some sectors as a reduction in the educational requirement. However, this already happens: in all of Spain around one in four students graduates in Secondary with some pending subject. Further, the Ministry of Education is in the process of reviewing the curricula (what is taught and how), and is committed to a competence approach compared to the more purely content that currently exists, a measure that generates division among teachers.

Another aspect that has caused the most headlines is the suppression of the reference to Spanish as the vehicular language of Education. A reference that did not exist before 2013, when former Minister José Ignacio invented it for his Lomce. The Catalan nationalists, architects of this change, have sold the measure as a shield for their linguistic immersion system, although the matter is far from closed: The Superior Court of Justice of Catalonia ruled last week that Catalan schools should offer at least 25% of their classes in Spanish, a measure that until now only applied to families who requested it (which did not exceed a dozen a year) and that de facto would end the immersion. The final twist on this issue is that the TSJC’s decision is based on the Lomce and the Generalitat intends to appeal it: the Catalan Government is convinced that it will win when the new rule becomes a reality.

Among the debts of the norm, teachers are especially critical with one omission: the reduction of the ratios of students per class. The Ministry has refused to include this rule in the Lomloe and argues that communities can lower it, that they have powers for them. Critics reproach him that if they consider it important why they leave it in the hands of the autonomies, that they can do it or not.

At a purely educational level, Education professionals regret the refusal of the Government to recover Ethics in 4th year of ESO, a compulsory subject that the Lomce passed. The PSOE argues that the curriculum is overloaded and there are no more subjects, the teachers maintain that it is a vital subject to promote critical thinking. Teachers who teach computer science have also called Lomloe a “missed opportunity” in terms of the treatment their subject receives, which will remain as optional in the best of cases depending on whether the communities decide to offer it or not. Finally, Religion will continue to be a subject of compulsory offer for schools but optional for students. In addition, he loses his mirror subject (the alternative that had to be offered, which was Values), which will force the centers to balance to place it in the schedule because it is not possible to have students without class in the middle of the school day.