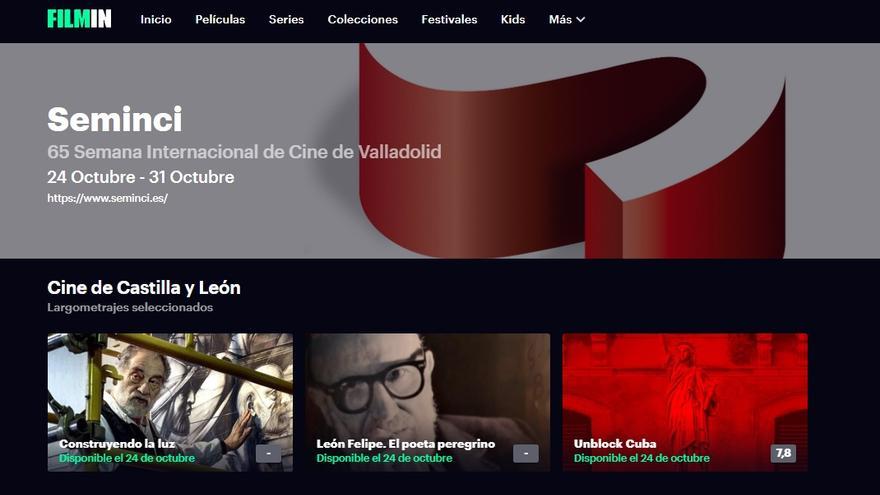 For some months the celebration of the Seminci, the International Film Week of Valladolid, has hung by a thread due to the COVID-19 pandemic. The doubts are finally dispelled, from this Saturday, October 24 until the 31st, the second oldest festival in Spain, will screen a total of 150 films -100 feature films and 50 shorts- in eight theaters and halls of the city. This year and for the first time in its 65 editions, part of the sample, formed according to its director, Javier Angulo, by the best possible auteur cinema, It can be seen on the Filmin audiovisual platform. Both Angulo and the co-founder of the Spanish streaming service, Jaume Ripoll, celebrate this collaboration.

“30% of the programming will be able to be seen in Filmin”, summarizes the director of the Seminci for 13 years, Jesús Angulo. Due to the pandemic and the need to show the films in several different sessions due to the reduction in capacity imposed by the Junta de Castilla y León (30% in theaters and a meter and a half of distance between spectators), some of the sections of the Seminci will also be available on the web.

A cycle of films from the so-called British Free Cinema of the sixties, which includes directors such as Lindsay Anderson or Tony Richardson, the Cinema and Wine selection, documentaries on climate change, the Castilla y León film festival, or a selection of films from European animation, are already posted on the web. This is not the first time that Filmin has reached this agreement with festivals and, in fact, Atlàntida Film Fest, promoted by the platform, is one of the main online festivals in Europe. “As of today we have nine on our platform,” Ripoll recalls by phone.

The reasons for this collaboration to be successful for both parties are various. On the one hand, they benefit the Festival, which can expand its potential audience and, on the other, the platforms, which achieve prestige with their seal of quality and expand the catalog. “We are a platform that wants to publicize the cinema that we like and we believe that festivals are one of the few prescribers that remain for audiovisuals. It is a way to highlight good content among all the abundance of titles”, explains Ripoll . Thanks to this collaboration, the festivals have two tracks. “One physical as an event, and another online, as a stamp, which serves so that the public can highlight one title over another in this magma of posters that the internet has become”.

For Angulo, the formula they have arrived at complements perfectly. “We have the Official Section, and the Meeting Point, History Time and the Spanish Cinema, which are only face-to-face, that is, 70% of the total number of films.” Still, Angulo, a film critic and cultural journalist for decades, believes that festivals are more than just the screening of many films.

“It is a cinema party where the best new films of the season are, where the public meets the teams, where there are journalists and people from the industry. In addition, it is a tourist attraction that leaves added value to the city.” According to Seminci, in previous years the city of Valladolid has seen its consumption increased by 30% during the days of the festival.

Ripoll does not believe that platforms like his put the survival of festivals at risk. “Those of us who like cinema love to see it in theaters, but not everyone has the privilege of having them nearby or of being able to go to a festival. Maybe those people who couldn’t do it now can. We won the platforms, they win the festivals and the public wins above all. ” Ripoll and Angulo agree that the future of these events will be hybrid. “I hope it is a model that is consolidated and that it will last for many years,” says the co-founder of the platform. “Does it mean that they all have to be hybrids? No. But it can work for specific festivals like in this case, Ripoll sentenced.

What to see at the Seminci?

Among the more than 150 films, the 2020 Seminci will offer 90 premieres, of which 29 are world premieres, two European and two international, in addition to 57 titles whose premiere in Spain it will take place during the festival, such as “Snow in Benidorm”, by Isabel Coixet, which will be shown on Saturday 24. Four titles shortlisted at the European Film Awards are included in the program: “Servants” (Ivan Ostrochovský), “Persian Lessons” (Vadim Perelman), “Josep” (Aurel) and the closing film, “A Triomphe “(Emmanuel Courcol).

The Official Section concentrates titles, such as “There Is No Evil” (Mohammad Rasoulof), winner of the Berlinale Golden Bear, a contest that was also awarded by the Crystal Bear, an award given by the Generation Plus children’s jury, to “Sweet Thing” (Alexandre Rockwell), a film that also won the Audience Award at the Pingyao International Film Festival. “Here We Are” (Nir Bergman) and the aforementioned “Un Triomphe”, which received the Cannes 2020 Seal. The Venice Film Festival awarded the films “The Disciple” (Chaitanya Tamhane) with an award for best screenplay and a Fipresci award, and “The Wasteland” (Ahmad Bahrami) for best picture.

Also included in this section are “The Cloud in Her Room” (Zheng Lu Xinyuan) which has just won the Tiger Award at the Rotterdam Festival; “Minari” (Lee Isaac Chung), which won the Grand Jury Prize and Audience Award at Sundance; “Servants” (Ivan Ostrochovský), presented at the Berlin Festival, and “Preparations to Be Together for an Unknown Period of Time” (Lili Horvát), which has won the FIPRESCI Award at the recently held 36th Warsaw International Film Festival. Finally, the Official Section short film “The Unseen River” (Phạm Ngọc Lân), which received the award for the best international short of the recently held Vila do Conde competition.

At Punto de Encuentro, the festival presents for the first time in Spain the film “Wisdom Tooth” (Wisdom tooth) by Liang Ming, premiered at the 3rd Pingyao International Film Festival in 2019, where it won the Fei Mu Awards for Best Director (Chinese-language competitive section) and the Roberto Rossellini Awards Jury Award (international competition), a rare achievement in the history of the pageant. The section also features “Mogul Mowgli” by Bassam Tariq, winner of the FIPRESCI award in the Panorama section of the Berlinale.

Spanish Cinema brings together the most significant Spanish film productions of the season, some of them awarded at the Malaga Festival, such as “Las chicas”, Biznaga de Oro and Biznaga de Plata for best photography, and “Rosa’s wedding” with the special jury award and the best supporting actor award for Nathalie Poza, as well as “Arenal,” Silver Biznaga for best short film. For her part, the director Isabel Lamberti won the New Directors award at the 68th San Sebastian Film Festival for “Last Spring”.