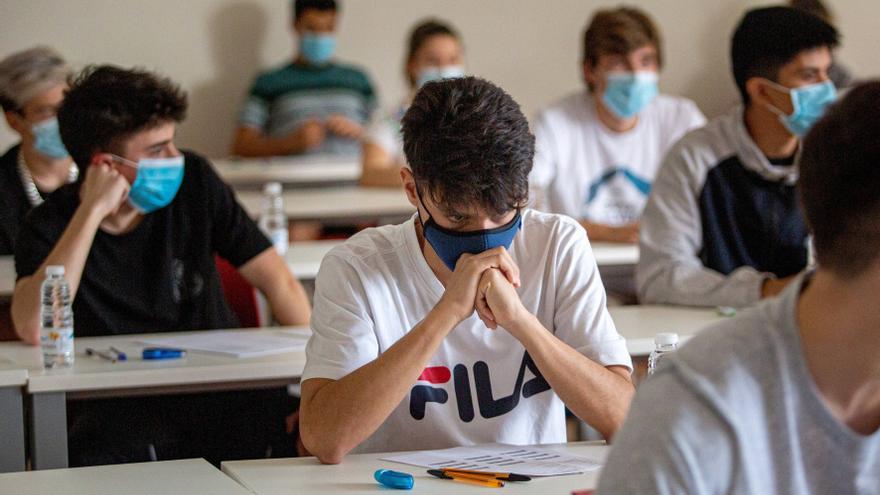 The Baccalaureate Assessment for University Access (EBAU), the old one Selectivity, starts this Tuesday in Spain. The first community that will summon its students to the tests will be Murcia this Tuesday, June 1, while the students from Andalusia, Ceuta and Melilla will be the ones to do so later.

This year's EBAU it will finally be held in person, Despite the extraordinary measures that may be taken in the context of the pandemic. The order that regulates its organization this year establishes the celebration of the EBAU before June 18 in ordinary call. This means taking the exams on the usual dates and not as late as last year.

The exams, to which more than 200,000 students attend every year throughout Spain, were carried out in 2020 with exceptional measures to avoid contagion, such as the use of masks or the multiplication of venues, including sports halls or fairgrounds, which facilitated the safety distance of two meters between students.

Also this year these types of measures will be taken. In Extremadura, for example, each of the 19 venues where the tests will be held will have a Covid manager who will act if someone with symptoms compatible with Covid-19 or any other contagious disease is detected. The protocol establishes a minimum distance between students of 1.5 meters, it will not be possible to exceed 40% of the capacity in the venues, they will have different entry and exit routes and they will be accessed in a staggered manner.

On Andalusia, the University of Granada has designed a contingency plan that contemplates the mandatory use of masks and hydroalcoholic gel, an increase in the venues where the exams will take place and access control to them.

Likewise, the protection protocols in Asturias They foresee carrying out the tests in large spaces, with low occupancy, so that the security meter and a half are always respected. A general plan and protocols have also been drawn up for each of the venues that establish the rules of access and permanence during the exams.

Safety distance, circuits, orderly access to the classroom, use of a mask and multiplication of venues, will be the keys that will govern the Selectivity in Galicia, through a protocol that reflects the measures similar to those of last year.

The call of the EBAU in Cantabria it will be governed, like last year, by a protocol conceived to avoid displacement of students and allow them to take exams near the centers of reference.

Also in Balearics This year a logistics similar to that of 2020 is planned, both in terms of health measures and types of space. There will be more spaces enabled to facilitate distances, more teachers and coordinators.

On Castilla la Mancha, the measurements will be the same as last year. The UCLM website has made a prevention plan and a video available to students. For example, students who have symptoms or have been in contact with someone positive for coronavirus will not be able to access the test site.

In order to avoid crowds and massive displacements, the EBAU of The Rioja It will take place in three locations (Logroño, Haro and Calahorra). In addition, it will be mandatory to maintain a distance of at least 1.5 meters and wear a mask, in all classrooms gel will be available and adequate ventilation guidelines will be followed, among others.

On NavarreAs in the previous year, prevention and hygiene measures have been established. For this reason, people with symptoms compatible with Covid-19, who have been diagnosed with the disease and have not completed the isolation period or those who are in the home quarantine period, will not be able to access the center.

Nor will they be able to access the exam center in Castile and Leon People with symptoms compatible with COVID-19, it is necessary to maintain an interpersonal distance of at least 1.5 meters, limiting contacts, frequent hand hygiene and the use of a mask at all times.

In the Valencian Community, sites with greater capacity have been enabled to avoid crowds at the entrance and exit of the exams, use of drones to control them from the air and the reinforcement of transport.

According to the data collection carried out by Europa Press, The community that will first hold the EBAU in ordinary call will be Murcia, It will do so between June 1 and 3. They are followed by Navarra and La Rioja (June 2, 3 and 4). On the contrary, Andalusian students, Ceuta and Melilla will be the ones who will later take these exams, specifically, on June 15, 16 and 17. The rest of the autonomous regions will carry out the EBAU in the week of June 7 to 13.

In Castilla-La Mancha, the EBAU will be held between June 7 and 9, the same dates as in Cantabria and Madrid, although in the latter region, the tests will be extended to four days (until the 10th).

Between June 8 and 10, students from the Valencian Community, Aragon, Extremadura, Galicia, Asturias, the Basque Country and the Balearic Islands are called to examine themselves. In Catalonia they will also undergo these tests during these days, including the 11th.

In all regions, the EBAU will last three days, except Catalonia, Madrid and the Canary Islands, where the tests will last four days.

Extraordinary EBAU in July except in Catalonia

Regarding the extraordinary call, the tests can be held in July or September, in both cases, before the 16th of that month. On this occasion, the dates agreed by the different educational ministries are more disparate, although almost all have advocated setting the call in July.

There is only a region that will celebrate the extraordinary EBAU in September, which is Catalonia, on September 7, 8 and 9. There are three that will celebrate the test in June: Navarra (on June 23, 24 and 25), Castilla-La Mancha (June 29 and 30 and July 1) and Murcia (June 30, July 1 and 2) . All tests will last three days in extraordinary call.

As in the ordinary call, the students from Andalusia, Ceuta and Melilla will later take the extraordinary tests: on July 13, 14 and 15. Although Galicia joins these dates.

Questions to choose and multiple choice

The ministerial order also contemplates, as it already happened last year due to COVID-19, that there will only be "a single examination proposal with several questions", but students will be able to choose, within a number previously determined by the competent body , what questions to answer.

Tags: it will be, Murcia, selectivity, Starts, Tuesday