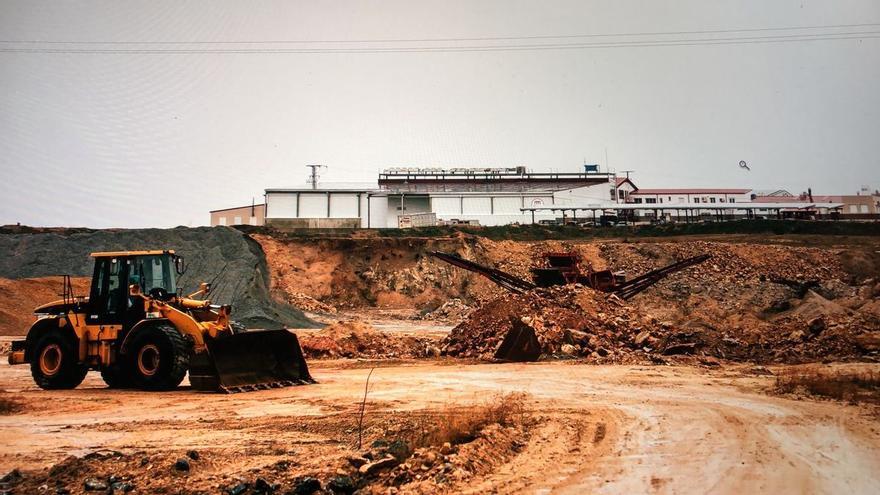 In the province of Segovia there are more than 8 pigs per inhabitant. The highly polluting intensive pig farming industry threatens to grow out of control.

It rains in Bernardos, a small town of less than 500 inhabitants in the Segovian countryside. In the Plaza Mayor they display banners and posters against what is coming their way: the construction of 48 new pig farms throughout the province. The industrial livestock farms, the same ones that Alberto Garzón has criticized this week, are already showing their paws. An industrial model that has wreaked havoc in Catalonia, Aragon and Andalusia, and that now threatens to take root in both Castiles. Especially in Castilla y León, where there is less than a month left for the elections.

The province of Segovia is the smallest of its entire autonomous community. Also the second least populated (only surpassed by Soria) with just over 153,000 inhabitants. On the contrary, it is the one that has the most pigs. The suckling pig is the Segovian flagship and it shows. The pig census far exceeds one million animals. "It is found around 1,300,000 copies throughout the province. It comes out to almost 8.5 pigs and a half per person."

He tells it to THE PERIODIC OF SPAIN Bethlehem Bernardos. She, who goes by the name of her people, soon emigrated to Madrid. It has now returned to its origins to find a more peaceful life in the rural environment. But he has found that they want to turn the town "into the pigsty of Spain." And they are not willing. Neither she, nor the residents of the town, nor those of the neighboring municipalities. Añe, Domingo García, Armuña ... All threatened by the possible construction of new macro-farms and the expansion of existing ones.

That is why they have set up a neighborhood platform that brings together these municipalities of the Segovian countryside. A rural enclave that has always lived from agriculture (especially cereal) and livestock. "But the extensive and sustainable cattle ranch; the one of all the life. Not this," he points out. Rafael Chamorro, another member of the entity. They are called Plataforma Futuro Limpio Campiña Segoviana and thus join other counterparts that already operate in Zamora, Cuenca or Albacete. They receive this newspaper in the Plaza Mayor de Bernardos, just on the day that the opposition has asked Minister Garzón for a correction for addressing in a controversial way in the Guardian the question of macro-farms.

Spain, with almost 33 million head (according to Eurostats), is the country with the most pigs in the European Community (ahead of Germany and Denmark). And the third in the world, only behind China and the United States. Segovia is a national powerhouse in this sector and the market rules here. Now, the residents of the countryside fear that this paradigm shift will also change their lives. And not only they say it. The Junta de Castilla y León itself has decreed 24 vulnerable areas due to nitrate contamination, which include 387 municipalities and 10,000 square kilometers.

However, the projects continue and the sector does not stop growing. Very close to Bernardos is Cárnicas Tabladillo, the Segovian company specialized in serving suckling pig. It sells its product in more than 20 countries and has been awarded as the best Segovian company of the year. Bulldozers work around the plant. It is in an expansion process that began in 2018 and that will allow them to increase their production by 60% and go on to slaughter 10,000 piglets a day.1 We have tried to talk to them, but they have not attended us,

There are three main concerns that macrofarms would bring to the inhabitants of the area: the increase in air and water pollution, the smells that they will have to endure daily and the transfer of trucks and heavy machinery through a town that does not have a large avenue to travel through. The first is the one that worries the most. Especially water pollution. There are many municipalities in the province that cannot consume the water from their taps because of the pollution generated by these industries. This is already the case without the presence of macrofarms. "If these projects go ahead, imagine what water we will be talking about," they explain from the platform.

"A manure storm is closing in on the region," they warn in the campaign they have launched on Change.org to try to stop what seems inevitable. Because that's the key to this conflict: the so-called slurry, which are the excrement of animals, are highly polluting. Ammonia, nitrate and phosphate that currently poison the water of the Eresma River, would multiply exponentially. "They are dumped without any control," says Belén.

Nor do they buy the usual hook that macro farms will bring jobs: "They try to convince us by saying that they are going to create many jobs. Many more jobs are being destroyed, because many small local ranchers are forced to close due to not being able to compete. with big companies. As these farms disappear population is lost and the production of meat of the best quality. These companies only seek economic benefit and lack sensitivity towards the people who live in these towns and towards their environmental quality, "they tell from the platform.

They thus give the key to another of the collateral damages of the implantation of this intensive livestock system: the damage to Emptied Spain. The paradox that the industry grows in these places does not entail an increase in the population. Rather the opposite: "Due to water and air pollution, and bad smells, we will lose the tourism that occupies rural houses. Second homes will not be built or old ones will be rehabilitated. Professionals who live from construction and allied trades will be out of work Stores and small industries will lose their regular customers. Our towns will be definitely deserted", they forecast.

The problem of macro-farms comes, Greenpeace tells this newspaper, from Catalonia. They were pioneers in this intensive farming method. The giant Agropecuària de Guissona, located in the ilerdense municipality of the same name, implanted these macro-farms in Catalonia and now it does so in Aragon, the autonomous community with which it borders. "They tried to open more farms there, but they found a partial moratorium from the Generalitat that prevented it. That is why they are now expanding towards Aragon, which is the most worrying area right now in Spain," says Luis Ferreirim, spokesman for the environmentalists. THE PERIODIC OF SPAIN He has contacted the Catalan company, but they have declined to comment.

Macrofarms have already wreaked havoc on the water of Catalonia. According to the data of the Catalan Water AgencyIn 1998 there were 204 municipalities declared a Nitrate Vulnerable Zone. But by 2015 they had already increased to 422 (more than double in less than two decades), which means almost half of the Catalan municipalities. The Agency concluded, in its River Basin District Management Plan 2022-2027, that “73% of the masses of underground water in Catalonia in a 'bad' chemical state are due to excess nitrates & rdquor ;. A Greenpeace report concluded that industrial livestock in Catalonia is the one that contributes the most in all of Spain to the climate crisis.

Ecologists also denounce the living conditions to which the animals of these types of farms are subjected. Greenpeace activists sneaked into an intensive pig farm in Castillejar (Granada) and concluded that the cattle live in a situation, that there is practically no control or inspections and that breaches of the law are rarely punished. The most shocking of the report, however, are the photos.

The controversy of the macrofarms seemed a problem limited to municipalities in Empty Spain that have also joined in this crusade. Minister Garzón has been the one who has raised the hare this week, denouncing the situation in an interview in The Guardian. Some statements that have also caused a political earthquake in Spain. The PSOE was unmarked and the opposition demanded an immediate rectification.

And in the background, the elections. On February 13, the future of the Castilian-Leon government is at stake at the polls. Controversial elections since its inception, since Alfonso Fernández Manueco (PP) kick Citizens out of the government and anticipate the electoral appointment. In Bernardos and the surrounding towns, no one doubts that the Segovian suckling pig will end up being an unexpected trick to be played by the candidates.