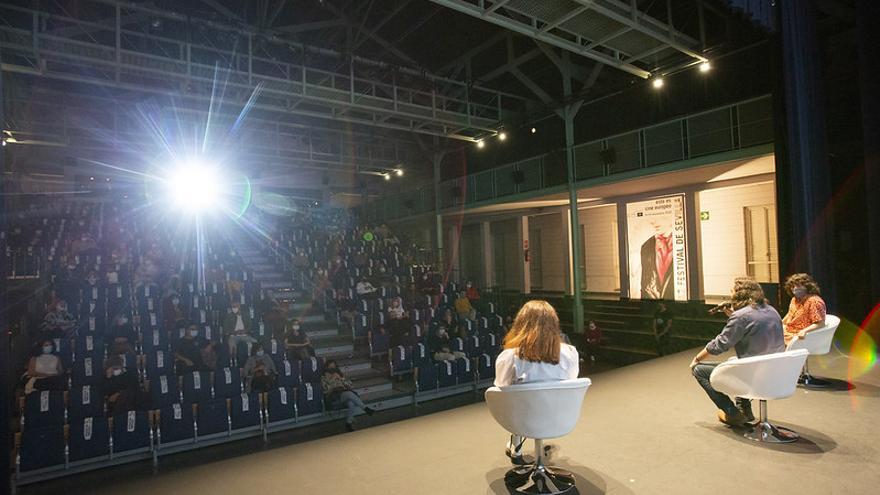 He said it Luis Lopez Carrasco, director of The year of discovery, in thanking the Grand Jury Prize in the Official Section of the Seville European Film Festival (Seff): “Festivals are very important to maintain diversity”, and more so in a year like the present, in which, without these events, less commercial cinema would have become almost irrelevant.

As well, diversity was what was in the list of winners announced this Saturday at a virtual press conference, following the precepts of a safe culture. Among the winners, several outstanding titles: Malmkrog, from Romanian Cristi Puiu, Giraldillo de Oro for Best Film and Best Screenplay Award; Ondina, from german Christian petzold, the film that opened the Festival a week ago, was recognized for Best Director and Best Editing; Y 200 meters, from the Palestinian Ameen Nayfeh, the Seville Festival Audience Grand Prize for Best Film in the Extraordinary Stories section.

Films almost antagonistic in concept: Malmkrog, which won the Best Director award of the new Berlinale section Encounters, recreates a dinner for aristocrats inspired by the texts of the Russian philosopher Vladimir Solovyov; Ondina baby from Norse mythology, while the young Nayfeh is ascribed to 200 meters to the cinema committed to the situation in Palestine under the abusive and often cruel impositions of the Israeli Government.

Another Grand Audience Award traveled to Russia, that of the EFA Selection: specifically, for a story as original as the one told by the director Vadim perelman in The Persian teacher, where a Jewish prisoner pretends to be Persian, and has to invent a whole language when a Nazi soldier asks him to teach it to him.

For its part, the award for Best New Waves Non-Fiction Film Ex Aequo was shared ex aequo between Petite Fille, from french Sébastien Lifshitz, on the very current issue of sexual dysphoria in minors, and Nine Sevillas, from Gonzalo García Pelayo and Pedro G. Romero, portrait of the capital of Seville with its identities and its topics and its not little complacency.

Likewise, the award for the best Andalusian Panorama film went to Hopefully tomorrow, from Ignacio G. Merlo, film starring Olaia, who works as a cleaner while preparing to audition for the title role in a play; and her husband Sebas, who runs the gatehouse of the building where they live, and has to take care of their daughter, Lola, and the house.

The Special Prize for the Best Direction of a Spanish film that has its national or world premiere at the Seville Festival for Nation, from Margaret Ledo, who also connected live to thank the award and defend a “feminist cinema” and attentive to memory. Nation It was defined by the director herself as ““ a film that deals with how long it takes for women to have rights, not only to vote but also to access salaried work and the possibility of being independent. In short, how much it cost us to be a nation ”.

More awards: the Special Prize for the best director of a first or second European feature film went to Um fio of scarlet slime, from Carlos Conceição. The award for the Best Permanent Revolutions film, for Time of Moulting, from Sabrina Mertens, with Special Mention of Permanent Revolutions for The inocents, from Guillermo Benet.

Greek cinema never leaves you indifferent at the Seff, and this year the award for Best Film in the New Waves section went to Apples, from Christos Nikou, a production of that poetics (and ethics) a la Lanthymos that has ended up doing school. There was also a special Las Nuevas Olas Award for Conference, from Ivan I. Tverdovskiy; and a Recognition to the Las Nuevas Olas management for Back, nor to gain momentum, from Lupe Perez Garcia. The Best Actress award stayed home, falling into the hands of Petra Martinez, by Life was that.

One of the great favorites of this edition, Gagarine from Fanny Liatard and Jérémy Trouilh, had to settle for the Best Actor Award for Alsény Bathily, while another classic of the Seff, the Italian Gianfranco rossi, did the same with the Award for photography direction for his Nighttime.

Thus ended the most suffered edition of the Seville contest, which shows a more than positive balance for what it had as a brave bet in the midst of the storm of the pandemic. This was recognized by the mayor of the city, Juan Espadas, for whom this was “a happy day”, in which “the phrase is ‘goal achieved’ and ‘thank you’. That we did not have a blank year is very important, because consolidating a festival like this has been the work of many years and many people. We have been able to adapt to the circumstances, and next year we will recover the illusion of living, in which the cinema is always a good companion ”.