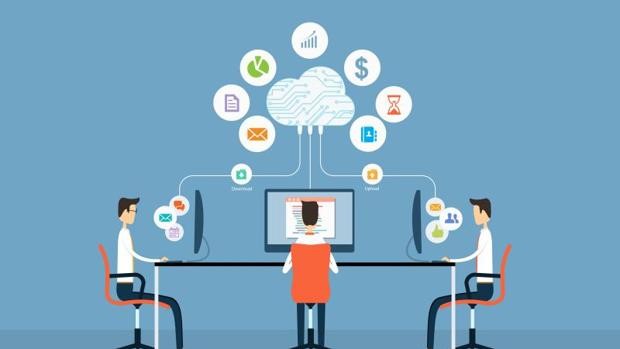 In a working-class neighborhood of Madrid, San Blas Canillejas, we find a hidden piece in the current game to achieve sovereignty in the data war. Mad 1, from the Interconnection company, is a data center with rooms full of servers and fiber cables. The scene looks like something out of a movie, because the heart of these places are rooms full of well-cooled black towers that resemble monoliths with networks of circuits, only suitable for the most knowledgeable in the field. Lined up in long corridors like domino tiles, with a wiring that is above our heads and buried under our feet, eleven thousand connections go from client to client. All this requires maintenance of height, on the roof, where the cold machines and generators allow the machinery to be kept in operation twenty-four hours a day. These centers, described by the director of Interxion, Robert Assenk, as “a hotel of machines”, drew attention in the middle of the pandemic, when they were labeled as “essential service”, while at the same time they pointed to Spain as the next European hub, where the Peninsula, due to its key geostrategic position, has become a place coveted by big technology, and in which Interxion took twenty years ahead, positioning itself in what is now called Silicon Alley. The Director of Interconnection, Robert Assink – Guillermo Navarro The landlord His function is to keep the equipment of hundreds of companies, and they also serve as an interconnection point between them. It is a landlord that provides the physical place for the data, and that over the years has grown with 120,000 kilometers of cabling and 9,000 servers, charging by the square meter and the kilowatt. It goes from Mad1, to the most recent Mad4, which is under construction, and the curious thing about the project, as highlighted by Robert Assink, general director of Interxion, is its magnitude: «In twenty years we have gone to a higher scale, when in In 2019 we opened the third center, we had 6 MW, and now we have 30 MW with an investment of 230 million ». One of the server rooms of Mad1 – Guillermo Navarro Interxion was born as an alternative for the liberalization of the telecommunications market. In their facilities they host from well-known social networks such as Facebook or YouTube to platforms such as Netflix or Disney +, through corporations such as Ferrovial or SEUR, offering faster and lower-cost interconnectivity. At first the demand came mainly from telecommunications networks, later non-technological companies arrived that wanted to outsource their data. And the third wave came with the growth of social networks, ‘e-gaming’ and streaming. The fourth wave is that of ‘cloud computing’, with companies that need the computing capacity of a third party, buying the service that goes through the cable to be able to offer their products. Others, on the other hand, prefer to create their own data centers. This is the case of Amazon, which announced the construction of three data centers in the Aragon area, and last year, first Microsoft, and then Google and IBM joined the idea. Maintenance machinery – Guillermo Navarro Leaving the cave They were born in Holland in the late 90s and have been in Spain since 2000. They started in Canillejas because it is a neighborhood where there was a main Telefónica node, and an electrical substation. In this way they had electrical power, more fiber networks in the same place. The four buildings are close together so that the customer who will be in the Mad4 can connect with any buyer of technology services that is available in the other buildings, as Assink recognizes. “In that sense, you can compare us with AENA, which does not operate on airplanes, but has a shared infrastructure and the airlines pay AENA to drop off and pick up passengers. Instead of an airport we have a center and instead of passengers we have data traffic ”, he explains. In the middle of Covid, they integrated with the American firm Digital Realty and gained visibility, because there was an exponential demand for connectivity through teleworking and digital leisure. In this sense, Assink acknowledges “with the pandemic we left the cave.” Raquel Figueruelo, the company’s marketing director, points out that Spain is finally in a position to be a digital service issuer: “The Iberian Peninsula has the telecommunications network that has best withstood the pandemic.” All this goes to show that interconnectivity is fundamental for a State, no operator is 100% autonomous. For this reason, Assink notes: “We are sexier as an industry. The wealth of a country should no longer be measured in GDP, but in an interconnectivity metric, because the quality of life has improved thanks to digital services. You save time and the digital society is essential for sustainable development. Being aware of this situation can mean the difference between developing a good idea and having a checkmate strategy. .