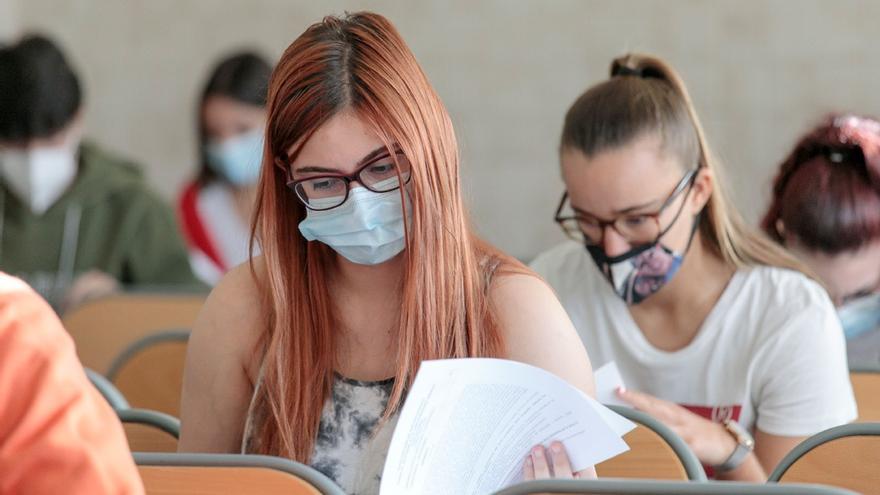 Have attended second of high school and like every june face the Ebau to access the college. To the nerves and the fear of being blank in the exams it is added this year the fear of not being sufficiently prepared after having attended blended classes or not having covered the syllabi in the past year due to confinement.

These are some of the concerns expressed to Efe by a dozen of the more than 200,000 students who from next June 1 will begin to examine of the university entrance exam (old selectivity). Like last year, the exams offer a different format than usual with more questions to choose from.

A few days after starting the tests, students who have followed second year of Baccalaureate in person are much more confident with the preparation acquired than those who have combined the classrooms with online monitoring.

“I think face-to-face classes offer more advantages than online classes because direct contact with the teaching staff is not the same “, has assured a prominent student from the Santo Tomás private school in Ciudad Real, who has attended the classrooms on a daily basis, as well as another student from a private center in Galicia, who believes that attending class has helped him a lot to prepare for the selectivity.

However, Diego, who has followed the course in a blended form in a public high school in Seville, believes that “it could have been better for him” and assures that those who have been in the classroom are better prepared.

The students also recognize the work of many teachers who “have managed it very well” and have “made an effort for us to have presence”, as highlighted by Alessandra and Sofía, from the Diego Velázquez public center in Madrid.

“Many concepts from first year have been loose and have caused me problems in second year,” says Iris, from the San Martín del Rey Aurelio public institute, in Asturias.

Opinion shared by Kooki, also a student from the Madrid public center, convinced that “The confinement of the first one has affected us because we did not give some topics”, while Beatriz (IES Venancio Blanco de Salamanca) specifies that it has been in physics, mathematics or chemistry where she has noticed the most deficiencies, having lost the explanations of last year.

Not being able to access the chosen career, a general fear

The fears of the students before the Ebau are the most diverse and range from broader concerns to “not passing the selectivity” or “that I do not do a good exam”, to more precise ones such as “suspend biology” or “misspellings in history or language.”

As happens every year, there is also the fear of “blocking myself before an exam”, “going blank because of my nerves”, or not being able to write all the contents that are known on the blank page.

The fear of the covid also hangs over the exams, since Diego, a student of a Burgos concert, He is afraid of being confined on the days when the Ebau is convened in his community.

Other students lose sleep the day after. “Leaving there confident that I am going to get the grade I want and when the result arrives, check that it does not reach me to enter the university in what I want to study” is another very frequent concern among those summoned to this entrance exam to higher studies.

Not forgetting, those who still do not know what career they are going to do and fear “choosing the wrong”, like Beatriz.

Specific preparation for the EBAU very diverse between centers

Kooki, Alessandra, Omaira, Sara and Sofía have received specific preparation in their institutes in Madrid to prepare for the exams. In the second half of May they have had online classes under the title “selectivity courses”.

In others, such as in an Asturian public institute, Iris has been given Ebau-type exercises in the exams during the course, “the same as the private student in Ciudad Real.

In Salamanca, Beatriz has not received “specific training as such”, but in their center they have taken advantage of the last days of class to do a review focused on the Ebau “, although remember that “the entire 2nd year of Baccalaureate is aimed at this test. It is like a continuous preparation.”

Paula would have liked her public high school in Burgos to guide her on how to study and prepare for the exam.

Iris supports the decision to keep the change of format because the Ebau prepares both in the first and second year of Baccalaureate and “we did not finish last year as we should”.

For Omaira it is also a justified decision because those who have not attended face-to-face classes “may have given less syllabus, so choosing in the exams benefits, since you go for what you know, increasing your chances of passing.”

In addition, Beatriz remembers those who have had problems in following the classes because they have had to confine themselves due to the pandemic and sometimes miss exams.

And they also justify the change in the format of the test by appealing to the emotional state in which they are: “the covid, the state of alarm and the curfew have created more stress and anxiety for me,” underlines Paula, while Diego from Burgos concludes that “Studying in times of a pandemic is not easy.”