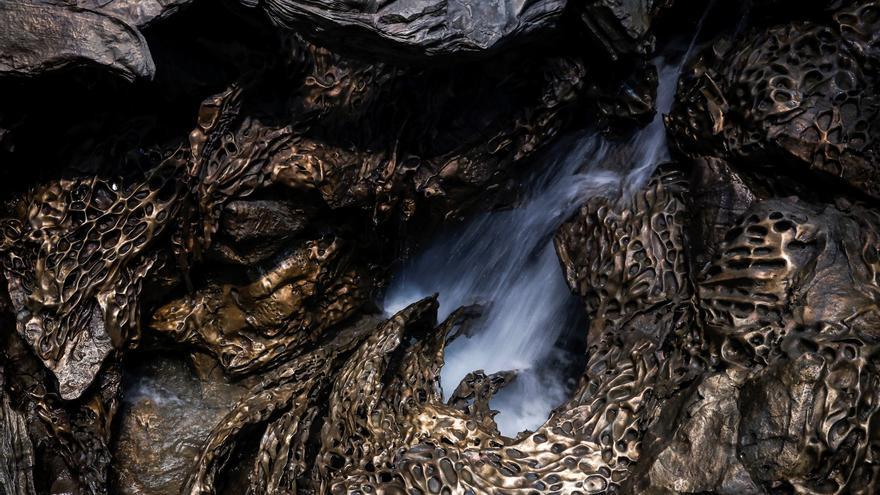 San Sebastián, Jun 1 (EFE) .- Water as an essential element is found in many of Cristina Iglesias' sculptures. Without him his new work, "Hondalea", which blends in with the sea, with the Cantabrian sea in his hometown, San Sebastián, would not make sense either, thus paying off a debt with the artist.

The first piece that Iglesias has created for the capital of Gipuzkoa is not only found in a privileged location, on the island of Santa Clara, in the heart of La Concha Bay, but it also stands as an equidistant point between two emblematic pieces, the "Peine del Viento "by Eduardo Chillida and" Empty Construction "by Jorge Oteiza.

To that metaphorical dialogue so many times attributed to the two pieces that close both ends of the bay, now joins a sculpture that is hidden from view, guarded by the walls of the house of the Santa Clara lighthouse, a building in disuse since 1968 that Iglesias has recovered for this project.

As if a cliff had burst into that space, the bronze sculpture by the artist from Donostia extends with its rocky and perforated texture until it completely occupies the floor of the building, measuring 74 square meters, which was previously emptied.

With a system of stairs reminiscent of that of the Casa del Agua in Toledo, which Iglesias intervened in 2014 for his proposal "Tres aguas", the visitor will have the option of contemplating from a height of up to seven meters this new "well" of the San Sebastian artist, who sinks to a depth of five meters.

The large vessel covered by 54 bronze pieces, weighing 15 tons, recreates the original bottom of La Concha Bay, although it is fresh water that breaks and flows at the rhythm of the tides through the golden hollows from a 60 cubic meter reservoir. , of which half are used for sculpture.

The media have been invited this Tuesday to visit the work with its creator, as a prologue to a week of activities dedicated to "Hondalea", which will open to the public this Saturday.

An institutional act this Wednesday, the opening of an exhibition that shows the creative process of "Hondalea" at the San Telmo Museum and an international symposium in which science and art will intersect are the activities around this work, by the that the artist has not charged anything and whose construction and assembly have been allocated 4.5 million euros, almost 90% paid for by the City Council.

Iglesias, in addition to important national and international awards, received his city's Golden Drum in 2016, the year of San Sebastián as European Capital of Culture. It was then that he dreamed of this work and obtained the full approval of the City Council. There was "the perfect storm", as he commented today.

"The work is more than what I had dreamed of," said the artist, who considers "an honor" that "Hondalea" is among the sculptures of Chillida and Oteiza, but did not choose the island of Santa Clara for this reason. "On the other hand, my work is invisible, it does not alter the landscape," he added.

"This is a project that connects with the defense of nature, and the seas and their coasts", a "fiction" that takes reality as an example so that whoever contemplates it can "escape and also reflect", and even as a host place for other artistic experiences, as a space for poetic activities or performance.

Despite his conservationist statement, not everyone sees the intervention of Iglesias on the island with good eyes, among them some environmental organizations and the municipal group of EH Bildu, which believes that "Hondalea" contributes to the "touristification" of the city and is "incompatible" with the climate emergency.

"The work that I have done is an accomplice of all those who want to protect the island, I would not have done it if it were otherwise," stressed the sculptor, who also does not believe that it is a call to mass tourism when the island has " a measure and a time set "by the ships that are in charge of the passenger transport.

The mayor of San Sebastián, Eneko Goia, who accompanied Iglesias in his appearance, has also intervened in this regard. "Sometimes I have the feeling that the tourist argument is used to disqualify a project. The reason for this work is Donostia and the people of San Sebastian, with a vocation for culture and art," he stressed.

Visits to "Hondalea" must be made on request, as the City Council wants to keep an orderly control to preserve that space, which can only be accessed by boat, or swimming. Applications in these first days have exceeded 5,000.