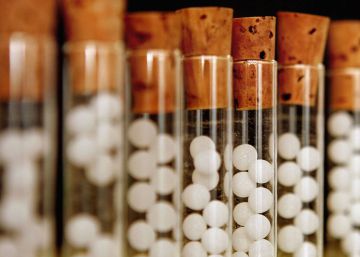 Homeopathy has been a "healing system" for 167 years, at least in the Spanish language. Ever since this voice arrived from the German for the first time in the 1852 edition, the Royal Spanish Academy has always considered in its definition that this pseudotherapy cured. Until today. In its new definition, homeopathy goes from being a healing system to a simple "practice" that "supposedly" produces symptoms.

The process to modify this definition began in 2017 in the Scientific and Technical Vocabulary Commission of the SAR. The new proposal has taken so long to arrive at the Dictionary because it had to be approved in the remaining Spanish language academies (ASALE) and later by the delegate committee of the plenary.

In this way, homeopathy loses the second of the three legs that maintained your social support. Now he has lost linguistic support: homeopathy, in Spanish, does not mean a cure. Before, the scientific-medical consensus had already withdrawn its support a long time ago, with increasingly sharp manifestations by scientific societies. Two years ago the Royal Academy of Pharmacy assured not only that it does not work, but that "Homeopathy can put health at risk". In Spain, no public university teaches homeopathy in a subject since last year. The last support he has left is the legal one, since European regulations determine that it should be sold as a medicine, although the Spanish Government intends to change this. In France, it is already in the process of withdrawing its public funding.

This definition, together with the fact that it is sold in pharmacies, has been able to contribute to the confusion that prevails in Spain about the true sanitary utility of homeopathy. In the Fecyt survey, 53% of Spaniards identified a lot, quite or somewhat with the claim that homeopathic products work (although only 7% were very convinced that it works). With this change in Spanish, the situation may be clarified a little more. So far the scientists said, from now on, homeopathy no longer cures or in speech.