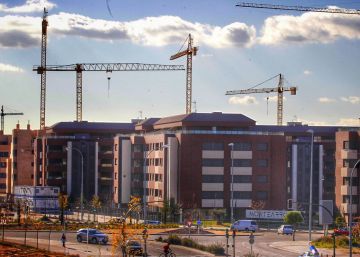 The home sales it falls again in Spain and they are already four consecutive months of negative interannual rates. The number of houses that changed hands fell by 9.3% last November in relation to the same month of 2018, to add 38,680 operations, the lowest figure in a month of November since 2016, as reported by the Institute on Monday National Statistics (INE). In monthly terms (November 2019 over October of the same year), the sale sank by 9.7%, its biggest decline in this month of the last five years.

The housing market in Spain expand the cumulative fall in the year up to 3.6%. In the absence of December statistics, everything indicates that the year 2019 will close with the first decline since 2013. Between January and November, 466,318 houses were sold, compared to 517,984 transactions made in 2018. To close the year in positive, in December more than 51,666 sales would have to be formalized, something quite complicated. “The fall in sales in Madrid, Catalonia and the archipelagos will make it almost impossible for 2019 to match the sales signed in the previous year. In addition, we have to be aware that there is a natural roof in the market that could be around 530,000 and 560,000 homes so the increase for next years will be, in any case, moderate, ”says Fernando Encinar, head of studies at Idealista. The Community of Madrid recorded the second largest drop in sales last November, with -21.2%, after La Rioja (-25.5%). The decline in the Canary Islands was 21% and 14.2% in Catalonia.

Fourth descent of the year

The 9.3% decrease recorded last November is the fourth in a row, after 21% in August 2019, 12% in September and 1.5% in October. In these months the experts of the sector have blamed the cooling of the housing market to the entry into force in summer of the new Mortgage Law, which delayed the granting of mortgages in Spain. But after seven months of applying the regulations, it seems that market stagnation is not only explained by that bottleneck that was generated in the signing of new mortgages. “These fluctuations in the variations show us that the effects of the Mortgage Law are still visible in this statistic, but we cannot forget that the political instability that the country has experienced in recent months has also been able to affect the citizen’s confidence to buy housing ”, Explains Ismael Kardoudi, director of Studies and Training at Fotocasa.

Something that has left shivering, especially, the market for second-hand housing, where it is difficult to close operations. According to the INE data, the sales of new construction houses endured the rate in the eleventh month of the year, with 7,672 units and a decrease of 3.6%; while used housing operations recorded the worst data since December 2018, with 31,008 sales and a 10.5% drop. 91.3% of the homes transmitted by sale in the penultimate month of last year were free homes and 8.7% were protected. The sale of free homes fell 8.3% in November 2019 at an annual rate, to 35,321 transactions, while operations on protected homes fell 18.5%, with 3,359 transactions.

Despite the cooling and the possible first fall, 2019 will be the second year with more homes transferred since the real estate bubble, only surpassed by 2018 (517,984). “We are optimistic because we are close to 40,000 sales transactions and show that activity in the sector is gradually recovering without major developments,” adds Kardoudi. The real estate market is showing clear signs of “normalization and stabilization and in this sense we will close 2019 with a figure higher than the 500,000 sales transactions with which it closed the previous year. However, from Fotocasa we believe that new policies are needed to help and benefit this normalization of the sector. It is urgent that the new Government bets on brick and for stabilizing with new housing policies that give the citizen security, ”concludes Kardoudi.