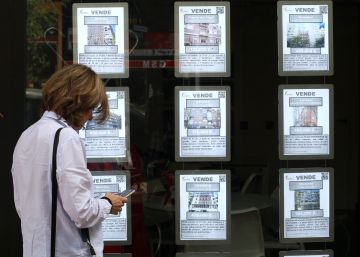 The great bump in the real estate market for the entry into force of the new mortgage law caused a resounding decline in the statistics of housing sales of the INE during the month of August and also puts the market in red numbers for the first time in five years. According to the data released this Thursday by the National Institute of Statistics, in the eighth month of this year 35,371 purchases of apartments and houses were registered in the property records of all Spain. That figure represents a drop compared to August 2019 of 21.1%.

The collapse of sales in interannual terms was expected. On June 16 the new mortgage law entered into force and the banks warned that adapting to the new legislation would hamper operations for some time. In fact, the regulations came out with a moratorium for the use of new telematic means by which banks and notaries They must communicate that it lasted until July 31. Notary statistics have already picked up these turbulence in the home purchase market in the months of June and July, with large falls that were mitigated in August. However, the statistics of the INE did not echo until now because it is based on data from property records, which take a little longer to reflect market ripples. This is because the operations can be registered even after a few months since they have been signed before a notary.

Red numbers in the accumulated annual

But there is more. According to the INE data The accumulated annual sales data has also been put in negative percentages. Specifically, between January and August of this year, 2.2% fewer homes were sold than in the first eight months of 2018. In absolute terms, 346,818 apartments and houses purchased compared to 354,551 last year. This indicator is important because it expresses the general progress of the market and the expectations with which the year can end. And it is the first time in five years that it turns red.

It was precisely in August 2014 the last time that sales of residential real estate so far in one year were lower than those of the previous year, something usual until then because the puncture of the housing bubble continued to penalize the purchase of housing. The following month (September 2014) there was an inflection and in a short time the operations began to grow in double digits, that is to say, the accumulated sales in the calendar year were always at least 10% higher than what happened 12 months before. But the market lost that vigor and in February this year the growth has already returned to a single digit with 8.2%. In May it was already half: 4%. And three months later it has begun to fall.

Since the decline is slight, and is clearly influenced by the bump of the new mortgage law, it is still too early to venture if the market has suffered a new turn. Experts so far predicted a slowdown with respect to the frenetic pace at which sales have grown in recent years, but did not expect a fall. Therefore, we will have to wait for the evolution of the following months to see if operations recover and 2019 as a whole manages to close with a progression compared to the previous year, something that has always happened since 2014.

Fall in all types

Back to what happened in August, the data shows that the year-on-year fall was sustained in all market segments: free and protected housing were lowered, whether it was new construction or second-hand apartments or houses. When observing the accumulation of sales so far this year, there is a difference between newly built homes, which are still 4.2% above the 2018 figures, compared to second-hand ones, which fall 3.5%

Finally, the statistics of the INE includes the set of sales, that is, both those of houses and those of other types of urban or rustic farms. In that case, the market plummeted 15.7% year-on-year in August and leaves the number of operations so far this year 0.4% below the data for the first eight months of 2018. The market downturn of Housing is produced in all the autonomous communities although with different intensity: while Galicia falls 8.6% year-on-year, Extremadura does 42.7%.