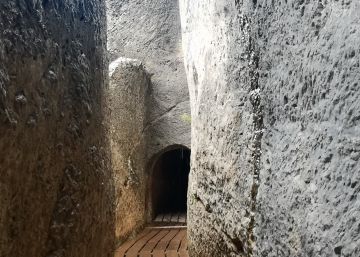 The study of the archaeologist and doctor of Architecture Miquel R. Martí Maties on the Roman aqueduct of Valencia It has caused an earthquake in the academic world. Martí says that the engineering work, which he has been studying since 2001, extended 98.6 kilometers between the municipality of Tuéjar and the capital. But the Professor of Archeology at the University of Valencia, José Luis Jiménez, He argues that “there is no basis” for this statement and that the conclusions should be adopted with great caution. ” Other experts consulted by this newspaper prefer not to pronounce themselves until they know the study, but they do not reject the possibility that Martí is right. Or not.

The study of Martí Maties, broadly speaking, argues that the various sections of existing aqueducts in the province of Valencia (up to 60 kilometers) are part of the same channel. He affirms that the channeling of the Valencian orchard, which had always been awarded to the Arabs, is nothing more than adaptations of the hydraulic work in Rome. But Jiménez denies it vehemently.

“There is not a sufficient basis to affirm all this. They are conclusions of a study that, as it is written, I find no justification. It is a vision without any basis. It is very common that there is the same type of stone in a significant number of conduits carved in the rock, but that does not mean that it has all of the same work, ”says the professor.

And he adds: “There is a basic principle: if there is no material evidence, the conclusions should be adopted with great prudence. I would have to know the work in depth, but to propose that hypothesis of Valencia as the end of the work means inventing a route of tens of kilometers in which there is not the smallest remainder conserved ”, he adds. “Valencia had its aqueduct and came from its surroundings. In the immediate vicinity there are aquifers and pipes of Quart de Poblet, Manises, Ribarroja … Of course there was a network of aqueducts, but that the Arabs later resumed it and watered the garden is a free opinion, ”he concludes.

For his part, Albert Ribera, a former municipal archaeologist in Valencia, also does not believe that the water was taken 100 kilometers from the capital. “It makes no sense, because the Turia passes through the city and because the catchments were only a dozen kilometers away.” The expert considers that the aqueduct that came from Tuéjar ends in Villar del Arzobispo, about 25 kilometers away, and was used to take the water to this dryland plain.

Martí Maties replies that he has been studying hydraulic work since 2001. “I have not invented anything. Everything is perfectly documented with GPS location of each of the points where the aqueduct passed. I have gone down to the rivers to see the tajamares of the work and I have asked the Town Halls to clean the weeds to do the checks, where none of those who criticize me has been. I have traveled each of its meters. Another thing is that Jiménez has published a book financed by the Generalitat saying that it ends long before and he doesn’t like this. By the way, the Romans were looking for spring water, as Vitrubio said, not from the river. I will not discuss anything with personal disqualifications towards me. If you want a debate with arguments, I am willing, ”he concludes.

Meanwhile, Isaac Moreno Gallo, public works technical engineer, geographer, historian and student of the aqueduct of Mérida, Remember that “you cannot assess a statement without knowing in depth the study.” “I don’t know if what Marti says is true or not, but I can say that when someone raises a new hypothesis some feel hurt. In the world of archeology there are many stabs. The expert recalls that when he stated, for example, that the work of the Mérida aqueduct originated a couple of centuries after the official version, He received numerous reviews.

The History archeologist and academic Alicia M. Canto, researcher of the Italica aqueducts, which amount to about 40 km – and the first to study, in 1975, this type of hydraulic works with an overview and not by sections -, does not want to pronounce on the study of Martí Matíes until he has read it. “It is a hypothesis that unites various sections so far unconnected. It seems a bit long, but if the important technical issue of gradient maintenance is met throughout the course, why not?”