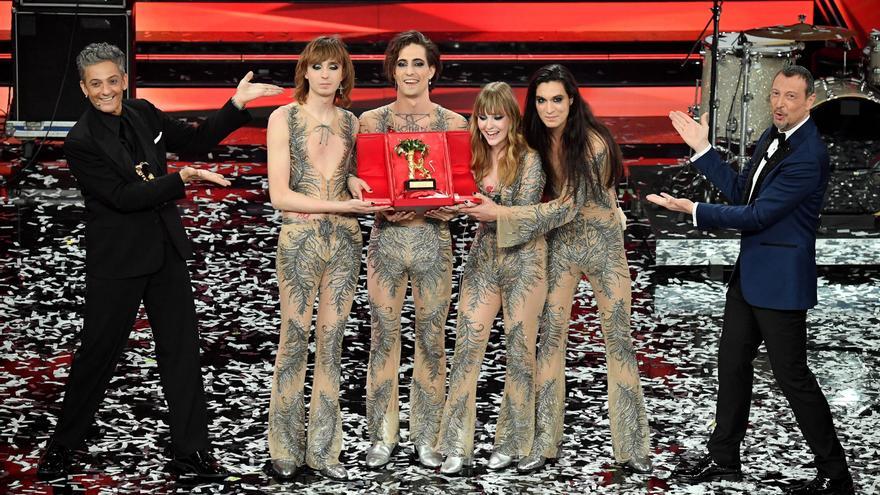 Rome, Mar 7 (EFE) .- The Italian rock group "I Maneskin" won the Sanremo Festival with their song "Zitti e buoni" (Quiet and good), in an edition threatened by the virus but which was finally held between security measures and for the first time without an audience.

The young members of this Roman group that rose to fame in 2017 on X Factor, Damiano David, Victoria De Angelis, Thomas Raggi and Ethan Torchio, will represent Italy at Eurovision in the Dutch city of Rotterdam on May 18 and 22.

"I Maneskin" were imposed this morning over the rest of 25 artists who competed in the main category, among them Francesca Michielin and Fedez, husband of the influencer Chiara Ferragni, who were second.

In the young promises section, Gaudiano won with his song "Polvere da sparo".

This has been the most atypical edition since this event so lived by the Italians began in 1951.

Its organizers did not give up and, although it was postponed, they decided to celebrate it with anti-contagion measures, although this did not prevent one of the contestants, Irama, from being able to show himself due to his contact with an infected person. His theme was delayed, recorded in rehearsals.

The Ariston theater in Sanremo, in the Liguria region (north), has appeared throughout these five nights of music with its empty seats, without an audience, something never seen before, and only the artists, the orchestra and the eventual guests were there. .

In this edition, the victims of the coronavirus in Italy were remembered, almost one hundred thousand, and those who fight this pandemic were honored, which has left more than 3 million infected in the country.

But there were also numerous calls to protect the important cultural sector in Italy, which has been hit hard by the health crisis, as cinemas and theaters have been closed for a year (except between June and October 2020).

Among the special guests was AC Milan striker Zlatan Ibrahimovic: "Failure is not a defeat but the beginning of a victory," he said in a monologue in the last "serata".

But the versatile Achille Lauro, a young and provocative revelation, who dedicated each of the five nights to a musical genre, emulating greats such as Elton John, David Bowie or Mina and disguised as a Greek god or bride, also passed through the Ariston stage.

Another of the guests was Diodato, winner of the last edition and who could not bring his "Fai rumore" to Eurovision because the international contest ended up being suspended due to the pandemic.

But Sanremo also featured great performances, such as Laura Pausini, whose career took off at the Ariston in 1993 with "La solitudine" and who just won a Golden Globe, and Umberto Tozzi, who sang classics like "Ti amo" ( 1977) or "Gloria" (1979).

As every year the festival was involved in controversies about the absence of presenters and the tradition of delivering a bouquet of flowers only to the singers was rejected by some of them, who passed it on to their colleagues as a sign of protest.

In some newspapers and on social networks, Ibrahimovic's comments were also criticized, branded as "toxic masculinity", and the request of the conductor Beatrice Venezi to be called "director" was also widely commented (in Italy many positions are still they say in masculine, even if they are performed by women).