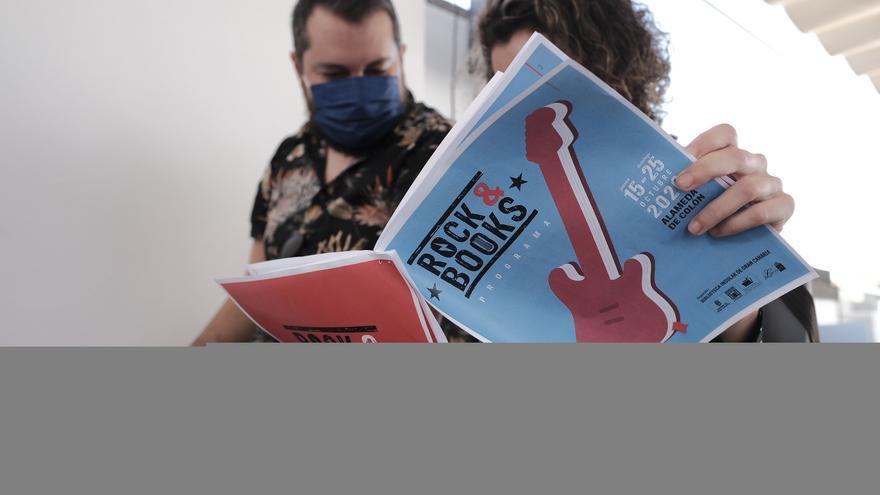 The Ministry of Culture of the Gran Canaria Cabildo celebrates October 15 to 25, the second edition of the ‘Rock & Books’ Festival, which will be held again, as in 2018, in the Alameda de Colón.

The aforementioned initiative, the only literary-musical festival of its kind that takes place in the Canary Islands, is organized by the Insular Library of Gran Canaria within the framework of its strategy linked to the so-called ‘Pact for Reading and Writing in Gran Canaria, Island of Books, Sea of ​​Cultures‘. Its heterogeneous and extensive programming that includes the celebration of round tables, concerts, book presentations, DJ sessions, exhibitions, children’s shows, performances and documentary screeningsAmong other initiatives, it was presented at the headquarters of the Insular Library by the Minister of Culture, Guacimara Medina, the director of the Insular Library, Nieves Pérez, and its two coordinators, the librarian Carlos García, and the cultural journalist Ramón Betancor.

The Minister of Culture, Guacimara Medina, highlighted the commitment of the Cabildo de Gran Canaria for the island’s cultural sector “now is the time to bet on the Canarian creators and creators and to seek synergies to continue making Culture, which is necessary”. An institutional support that Carlos García thanked for being able to offer a show that fuses several disciplines and that will be safe “temperature controls will be carried out at the entrance and the spaces will be clearly delimited so that the mobility of the public is controlled”, in addition, he requested collaboration of the citizenship so that they respect sanitary norms and that events like this can continue to be held. A project that next year seeks to make the national leap, assured the director of the Insular Library, Nieves Pérez, and that is the institution’s most ambitious project.

The initiative seeks to create a flow of connection between literary and musical creation in a dynamic and lively space, in which the public will be able to learn about the work and proposals of a large part of the creators of the Canary Islands. In short, the festival is proposed as a meeting platform between citizens and creators that also gives visibility to their projects.

The presentations of editorial news from authors such as Andrea Abreu, Judith Mateo, Romina Naranjo, Moisés Morán, Vicente Martín and Yanira Medina, among others, and the performance of bands and singers such as Papaya, The Polen, Said Muti, Dácil Santana or Superalejandrito, from a total of 20 groups, are complemented in the offer of this festival with other proposals such as the performance ‘Josefina de la Torre from the wall’ that will star live the plastic artist Miss Mensi and Flor de Canela, the theatrical session entitled ‘Revolución Doméstika’, by Esther Carrillo, the lecture sung ‘A little while with Boris Vian’ which will be given by Alexis Ravelo accompanied by the musician Alejandro Ramos, the projections of the works’ The experiment ‘,’ Zurda: a history of Chronic Scurvy and Guerrilla Urbana ‘, or the exhibition entitled’ Understanding punk clothing ‘, by Julio Pacheco, which will remain on display at the Insular Library headquarters until November 6.

In total, the second edition of the ‘Rock & Books’ Festival offers in its program seven DJ sessions, two activities for children, twenty concerts, two talks, seven book presentations, three round tables (one of them addresses the role of the media of communication in the dissemination of culture and another entitled ‘What do we talk about when we talk about poetry’), a performance and a theatrical performance.

The presence of the Tenerife writer Andrea Abreu stands out in the program. With her first published book, ‘Panza de burro’, she becomes one of the most unique voices in the new national young literature; that of the first Spanish rock violinist Judith Mateo, who presents her successful book edited by Planeta ‘101 songs with which you would connect with anyone’; of the student of modern music in the Canary Islands, Vicente Martín (he has published four books on rock in the Canary Islands) who will talk about his latest title, ‘La Kima. Rock on La Palma ‘; from the multidisciplinary artist (composer, guitarist, singer, producer, DJ, producer and writer) Yanara Espinoza, the leader of Papaya, one of the effervescent bands on the Spanish indie scene; the well-known writer Alexis Ravelo; by the author, editor (Editorial La Felguerat) and cultural activist, Servando Rocha or José María de Páiz, who presents a documentary full of vomit and anger about the irruption of punk in La Laguna, in the mouth of Miguel Díaz, ‘Zurda’, as a cornerstone.

The ‘Rock & Books’ Festival will be held with the assistance of the public, with the approval and authorization of the General Directorate of the Canary Islands Health Service of the Government of the Canary Islands. The Alameda de Colón space will be limited in order to control the access of a maximum of 300 people who will be subjected, at the entrance of the venue and in order of arrival until the capacity is completed, to a temperature control and other measures of prevention included in the containment and protection plan against covid-19, such as the mandatory and permanent use of the mask during the celebration of the events in the popular square, which will be distributed in several areas where the different planned activities will be held and it will have seats with maintenance of the regulation distance.

The ‘Rock & Books’ Festival, whose budget amounts to 70,000 euros, is included in the Covid-19 Emergency Cultural Plan promoted by the Ministry of Culture of the Gran Canaria Cabildo with the purpose of mitigating the ruinous effects caused by the pandemic crisis in the Culture, and generate investment in the productive fabric of the aforementioned sector. It should be remembered that the Guacimara Medina Council will have 10,649,184 euros to implement the aforementioned strategic plan during the remainder of 2020 and 2021.

The first edition of the ‘Rock & Books’ Festival held in 2018 was a success. During the ten days of it, some 6,000 people came to the Alameda de Colón to enjoy its program of literary and musical activities. On that occasion, 57 hours of programming were offered, of which 29 were dedicated to literature (talks, round tables, book presentations and screenings) and 28 to musical activities.

Salma Hayek takes command in “The Other Bodyguard 2”