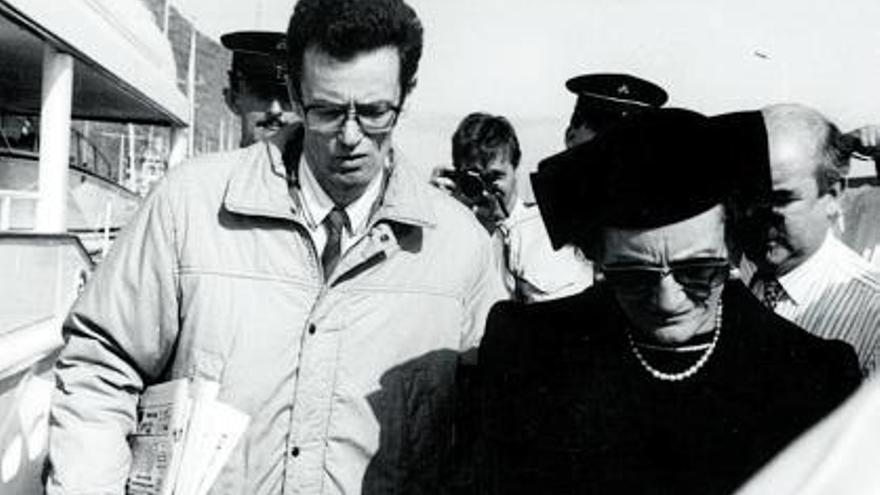 Today marks the 30th anniversary of the death of British millionaire Ian Robert Maxwell in Canarian waters. Accident, suicide or murder? And it is that the passage of time has not been able to bury all the questions of a case that shocked the world by the business depth of a character who for years competed hand in hand with Rupert Murdoch to have control of the fourth estate, that is to say , Of the media.

With a past full of chiaroscuro – the suffering that the Nazis caused his family and the four years that he lived in Berlin developing jobs (not to say spying) for the British Army -, the large debts accumulated by his companies – his communication group it had defaults worth 763 million pounds sterling in 1991 – and a future in the wire – the BBC and The Independent uncovered days before they died alleged criminal practices on the stock market promoted through their companies – were novel enough ingredients to to believe that what happened on November 5, 1991 in the Canary Islands was not a coincidence.

In the middle of the media earthquake that was spilling over into the UK, Robert Maxwell left for Gilbratar (various media contrary to his business point to a flight) and, later, he took another plane bound for Madeira to board the Lady Ghislaine , your luxury yacht, bound for the Canary Islands. The ship was docked in the Port of Santa Cruz de Tenerife on November 4. The taxi driver who took him to eat fish at a restaurant in San Andrés and the waiter who served him for dinner with spinach, asparagus with mayonnaise and three beers in a luxury hotel in Santa Cruz, were summoned to testify after confirming the bad news: Sergio Ramos, He even commented that the “friendly tourist had left him a tip of 600 pesetas” before getting into the taxi that took him to his floating residence.

Already in the Lady Ghislaine, the magnate locked himself in a cabin and asked the crew – through an internal communication – to turn off the air conditioning: the British man was depleted by a flu process when the cruise through Canarian waters began. Around 04:45 hours his voice was heard – in what was supposed to be a conference with New York – heated, almost shouting, while the captain of the ship, Augus John Rakin, set course 2.86 towards Los Cristianos: to complete This maneuver was necessary to approach about six miles to the south of Gran Canaria before drawing a curve in the direction of Arona.

The dawn passed without major news – with the ship anchored a mile from the Aronero pier – until at 11:00 hours the people traveling on the Lady Ghislaine – Augus John Rakin, Robert Keating, Mark Ruud, Sussane Kjaer, Geoffrey Leonar . Lizza Kordalski, Gerald Costelo, Gordon Williams, Mark Atkins, Grahame Shorrocks and Estephen Crosthwaide – confirm that Maxwell is not on board (11:00 am).

Three hours later, a Focker from the Rescue Area Service, the Punta Llana tugboat and three SAR helicopters search an area of ​​the Atlantic located between Tenerife and Gran Canaria. The operation works. At 6:45 p.m. a lifeguard (José Francisco Perdomo Marrero) throws himself into the sea in search of a naked body that is floating upside down. The rescue position is fixed about 20 miles southwest of Gran Canaria.

No doubt. The 190 meters high, the 140 kilos and, above all, a small scar located near the right eye confirm the finding: the body was Ian Robert Maxwell (68 years old). The remains are transferred to the Gando Air Base and immediately to the Forensic Anatomical Institute, where a first autopsy is carried out that links the death with a cardiac arrest.

These results are expanded in a second examination in Great Britain in which there are blows on the left side that the deceased could have caused by falling into the sea. The Maxwell mystery lives on.

Robert Maxwell’s widow, French citizen Elisabeth Meynar, repeatedly visited the yacht on which her husband (Lady Ghislaine) was last seen alive. In the image above, with his son Philip.

Key names in this story

The eldest son of the tycoon

Made his disappearance official

The author of the controversial book

The ‘other’ Mossad collaborator

The captain of the ‘Lady Ghislaine’

They take control of business

Ian Robert Maxwell was born on June 10, 1923 into a Czech family of Jewish origin that was poorer than humble. The chronicles that try to recompose his robot portrait point to an environment in which the smallest of the house went barefoot, where he did not eat every day and was massacred by the Nazis. He always declared himself a mother (scholars of his life warn without hesitation that this extraordinary love was due to her protective spirit as opposed to the alleged mistreatment that his father inflicted on him) and, before managing to flee to England and obtain a new nationality , he saw how the German soldiers captured his mother, two of his brothers and his grandfather: all four were gassed in Auschwitz. His father was shot to the head before entering an extermination camp.

With that background it was only a matter of time before Robert Maxwell enlisted in the British Army and fought Nazism during World War II. He was, among other battles, in the historic Normandy landings. He became captain of the infantry corps and on his return from the front – recognized with the highest military honors – he decided to turn his life 180 degrees. Robert Maxwell was already married to Elisabeth Meynar when he became the distributor of a major scientific journal in the United States and the United Kingdom: he was not yet 28 years old when he bought a modest publishing house to which he added several printers. This was his first great adventure in the journalistic sector (1960).

As he grew as a businessman, he developed in parallel an effervescent political activity in the Labor Party that allowed him to be a parliamentarian in the United Kingdom House of Commons, after winning his seat in the Buckingham district: in this period he It was very close to the policies developed by the Soviet Union and other Eastern Bloc countries.

Father of nine children (five girls and four boys), Ian Robert Maxwell’s pulse did not tremble when he wanted to compete with Rupert Murdoch, who already controlled the boards of directors of Fox News, The Sun, The Times, Fox and Sky channels and even 21st Century Fox, for dominating the threads of the fourth estate. Seven years before his death he acquired the Mirror Group Newspaper, almost at the same time that he failed in his attempt to buy Manchester United (1984).

Maxwell is last seen aboard the ‘Lady Ghislaine’. The yacht is 12 miles from Gran Canaria.

The boat anchors one mile from Los Cristianos (Arona).

They start looking for Robert Maxwell on the ship.

The Norwegian station Stavanger receives an SOS from the command bridge of the ‘Lady Ghislaine’.

The Merchant Navy begins the search for the magnate at sea.

A SAR helicopter recovers the millionaire’s corpse and takes it to the Gando Air Base.

Relatives of the deceased arrive at the Tenerife South airport.