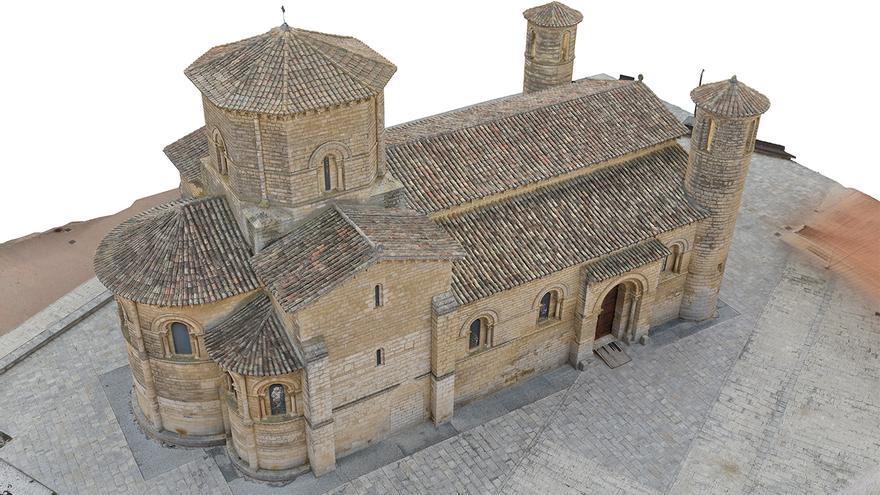 In one of the key scenes of the movie 'The Da Vinci Code', Professor Robert Langdon follows in the footsteps of scientist Isaac Newton, buried in the westminster abbey at the beginning of the 18th century. To immerse the viewer in the historical sequence, director Ron Howard could think of no better way than to virtually recreate the funeral while the protagonist of the Dan Brown saga walks through the main nave of the London temple. What in 2006 was nothing more than a suggestive cinematographic resource, today is a real option to know, investigate or disseminate the historical heritage. Just put on virtual reality glasses to walk, like Langdon, inside a Romanesque church or visit the corridors of the best museum in the world without leaving your home.

Although exciting, virtual reality is just one of the many possibilities that digitization opens up, which has emerged in Spain through continuous projects thanks to the evolution and cheaper technology, after years of trials. In Catalonia, for example, aware of this potential, they have launched one of the most advanced programs in the country. In fact, they can already be consulted on-line on the powerful Sketchfab platform more than 200 heritage examples that the Directorate General for Heritage and the Catalan Agency for Cultural Heritage have digitized since the start of the activity in December 2020. The initiative has grown to benefit from the "revolution" that has brought to museums and the field of heritage. In fact, the promoters of Giravolt liken these advances to the incorporation of photography in documentation tasks, which in turn experienced successive historical progress with the arrival of color snapshots or panoramic images or gigaphotos, extremely high quality files.

But, in this case, the main issue is not to digitize a lot or a little. Giravolt's objective lies in the creation of an "ecosystem" - as the promoters call it - in which the coexistence of digitized models can generate an interesting added value such as the "interaction" of 3D heritage. One of the most visible examples is in the Bohí Valley. The Romanesque church of the Lleida Pyrenees displays on its altar a reproduction of its valuable Descent, made of wood in the twelfth century. When the visitor enters the interior of the temple, he has to settle for observing a replica. The historical vicissitudes wanted the original to be distributed today between the National Museum of Art of Catalonia (MNAC) and the Episcopal Museum of Vic, which have arranged the different pieces based on their own interpretation of the work of art.

To date, the most seasoned of researchers had no choice but to take the car and go to the two museums to study the original, without ever having a complete perspective. Fortunately, the situation for this hypothetical historian is radically different today. "As we have everything digitized, we have reconstituted the Descent and we have placed it in the original context of the church ", explains Damià Martínez, an expert who heads the commission that develops the Giravolt program. In this particular case, it can be said that the technology surpasses the original, although those responsible prefer to walk with caution. "More than overcoming art, digitization is opening up a new dimension for us to understand it with the help of a very wide series of possibilities," says Martínez.

On the Giravolt platform there are not only the churches of the Bohí Valley. Furthermore, the set of selected assets is very heterogeneous due to the program's desire to give a "panoramic" view of Catalan heritage. In this way, the temples of the first Spanish Romanesque coexist with 3D models of prehistoric archeology, Gothic altarpieces or Renaissance sculptures. This interesting showcase also shows examples that are closer in time, such as the Villalbí motorcycle, the first vehicle of these characteristics built in Catalonia (1904) and that until now could only be seen in detail in the Museum of Science and Technology of Terrasa.

Now, can a virtual museum, such as the one proposed by this platform, become more interesting than the real contemplation of works of art? Damià Martínez uses the German philosopher Walter Benjamin to deny the greatest. "The experience, the emotion, of contemplating the original can never be surpassed by any type of reproduction," he maintains. Moreover, for the head of the Giravolt program commission, "the objective of digitization is to act as an ambassador for art and heritage, generating the desire to go to the site to live the experience." Reflection is interesting and hits the nail on the head of a palpable reality: the more prior information the visitor has when arriving at a place, the more productive the contemplation is. A paradigmatic case of this circumstance takes us to the remote Ecomuseum of the Valles de Aneu. Before traveling to the Lleida Pyrenees and from anywhere on the planet, the visitor can virtually tour the interior of the old house of a Catalan peasant and learn about each of the objects in it in detail.

The benefits of digitization appear to be limitless, particularly in the area of ​​dissemination. Because another derivative is 3D printing, capable of bringing art and heritage closer to people with visual disabilities as never before. "We have already printed some models, such as the case of a Virgin with a child, in a size very close to the original that blind people can touch with their hands without any problem in order to understand it better," exemplifies Damià Martínez.

One of the possibilities offered by the new virtual heritage lies precisely in one of the most pursued exercises by museums of the 21st century, interaction. "Heritage is not just for looking at it; with digitization, the user can turn an object over, move it away or bring it closer, obtain impossible perspectives in a physical space or even send it home in a file", explain those responsible for Giravolt. The latter thanks to the reproduction of works of art under the Creative Commons license, which allows researchers and disseminators to use virtual materials without any cost or explicit permission, with the only obligation to cite the source.

The digital documentation work will allow the Catalan program the future development of the so-called "reality TV", the technology that will help to travel a space in a virtual way without having to travel in time or space, as the fictional professor of symbology Robert Langdon in Westminster. An attractive immersive experience that is currently possible in rural areas of Palencia, for example, without having to travel. "With one of the virtual reality glasses currently on the market, such as the Oculus Quest, you can now navigate through the church of San Martín de Frómista or the monastery of Nogal de las Huertas", says building engineer Zoilo Perrino , who has managed to bring together his profession and his passion for history in digitization.

The expert refers to the collaboration program they carry out the Cluny Ibérica association, of which he is a member, and the Junta de Castilla y León, which has just put online - also on the Sketchfab platform - a extraordinary virtual reproduction of Frómista, thanks to photogrammetry and laser scanner technology. "We have a project around the Cluniac sites that allows us to investigate what the temples were like through technology. With these resources, we do a tourist outreach and dissemination work that can also economically revert to unpopulated localities, where there are more opportunities than it seems, "says Perrino.

But, if dissemination is one of the key possibilities of digitization, no less important is the contribution in the field of architecture and restoration, thanks to the accuracy of the recreated models. "In building, it allows us to make a complete interpretation of the shapes and volumes of a building that can be very complex to read", asserts Zoilo Perrino. Not surprisingly, the virtual alter ego of San Martín de Frómista - one of the cult temples for scholars of Romanesque art - presents a maximum error in its measurements of only one centimeter. It is not uncommon, then, that architects turn to the 3D tool to solve construction problems from the screen of a computer in their office to avoid the complicated and expensive deployment of scaffolding that physical observation would entail.

Can you learn History at the controls of a video game? The young man from Burgos Gabriel García has shown this by recreating buildings such as the gothic cathedral of your city in Minecraft, a popular virtual adventure in which the player constructs buildings with blocks to survive in fictional worlds. Author of the Minecrafteate project, the designer states that, in this way, "audiences of any country and of various age groups can have fun and learn by learning about the architectural style and history of a building through Minecraft."

Because the greatest current crossroads in the educational field is to be able to reach the new generations of young people, in whose classrooms "digital is more fun than traditional". Gabriel García acknowledges that learning "depends on the interest that each person has", but argues that this type of method "is already used in History or Architecture classes as practical group work exercises" that are thus "more attractive" than the traditional written essays.

The Minecraft adventure began for the designer in 2014 with the recreation of the Museum of Human Evolution of Burgos (MEH) and, since then, it has not stopped growing with a fundamental milestone. Raising Burgos Cathedral in 3D for the 800th anniversary of its construction took a year of work. But Gabriel García has not been satisfied with treating a world-famous building, a world heritage site. One of the works of which he is most proud allowed him to lend a hand to the famous empty Spain, where his contribution in the virtualization of the church of Santiago Apóstol de Villamorón, also in Burgos, was decisive in raising the 27,000 euros -2,000 more of the marked objective— that will allow its interior restoration. An achievement that motivates him to delve into the future in the task of disclosure of heritage, for which he has found a talismanic tool in Minecraft.