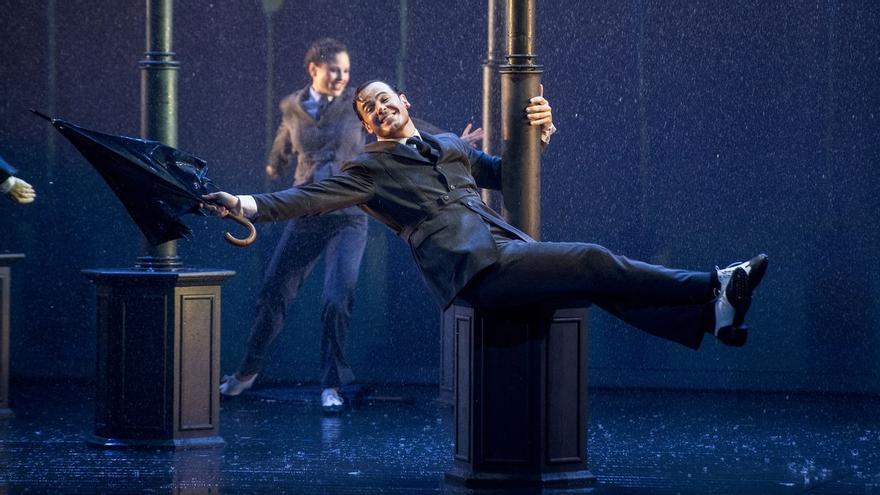 Five great productions in front of the ten of Madrid in a city that aspires to the cocapitality in musicals. “Becoming a cultural destination is a pending issue. Madrid has done very well. We should work more with the hotel sector and the Administration to achieve the same with Barcelona,” says Jordi Sellas, from Nostromo Live, Catalan producer of ‘Cantando bajo la rain ‘that next season will stop at the Calderón Theater in Madrid.

The capital of Spain is the third city in the world with the most musicals after New York and London. in close competition with Hamburg (Germany). Shows like ‘The Lion King’ offer packages with entry and train ticket, even with a hotel. In Barcelona it is not usual. “The Gran Vía has that point of magnetism of Broadway and the West End”, they recognize from Balañà, the company that owns the two largest theaters in Barcelona after the Liceu: the Tívoli (1,643 locations) and the Coliseum (1,689).

In 2019, a total of 1,630,000 spectators attended musicals in Madrid. According to Madrid Association of Producers and Theaters (APTEM), the estimated turnover reached 109.7 million euros. It is estimated that 21% of Spanish tourists go to the capital to see a musical.

There are good prospects this season in Barcelona. “The sales rhythm is very good, people really want to go out and see musicals. They buy more in advance than before,” says Sellas, satisfied with the perceived joy. Fingers crossed to lift restrictions that prevent occupying all the seats in the Tívoli, which has 1,600 seats but can only sell between 900 and 950, depending on the free spaces that must be left between spectators. Before the pandemic ‘La caula de las locas’, another of his productions, raised almost 300,000 euros per week; Now, despite the good pace of the pre-sale -40,000 seats already placed until November- they get 200,000 euros. To maintain profitability, they have increased ticket prices and launched promotions of four tickets at the price of three. The larger the group, the fewer empty spaces you have to leave.

‘Singing in the Rain’ adapts to theater the famous film starring dancer and choreographer Gene Kelly, whom he emulates Ivan Labanda in this title with famous melodies like the one that gives title to the work. This is the third Nostromo Live musical, signed as always by the successful duo Àngel Llàcer (stage director) and Manu Guix (musical director), with Miryam Benedited as responsible for the choreography, which includes several tap numbers and an impressive moment in the rain that falls thanks to an elaborate system of pipes and pools installed for the musical.

A love story seasoned with a lot of humor set in the glamorous Hollywood of the 20s centers this new adventure of the Llàcer-Guix tandem how good it has been in productions like ‘La caula de las locas’, the only great musical that defied the pandemic last season. The shift from silent to talkies frames ‘Singing in the Rain’ with Labanda as Ron Lockwood, the celluloid star, and Diana Roig as Kathy Selden, a young aspiring actress. Together with them works a balanced team where Ricky Mata shines, playing the funny composer Cosmo Brown, a friend of the gallant, and Mireia Portas as Lina Lamont, a silent film idol with voice and diction problems that will impede his evolution in the talkies.

I sing to the difference

‘Billy Elliot’, also preceded by a famous movie, is very different: a story of overcoming that strikes a chord and encourages Fight for the dreams and accept the different. It shows the difficulties of a humble boy in a mining town who falls in love with ballet. Instead of dedicating himself to boxing, a men’s sport, he joins the group of girls who study dance in the same gym where the ring is. Iker Castell, Pablo Fito, Marc Gelabert, Pol Ribert and Max Vilarrasa embody the protagonist in this production.

The same authors of the film sign this award-winning work that, unlike the film, features an impressive soundtrack created by Elton John. In a short time this musical has become a classic. “It is a gigantic assembly that needs years of preparation to train the kids”, highlights David Serrano, responsible for the adaptation. The show by SOM Produce, a Madrid production company, has 30 adult artists, 60 children -12 per show-, 10 musicians, 25 technicians and 11 teachers. Of the 1,100 seats available at the Victòria, with current restrictions the theater cannot fill much more than 800 seats. “I hope that soon we will be able to reach 100% capacity, as is the case in the communities of Madrid and Andalusia,” says producer Juan José Rivero.

‘Billy Elliot’ spent three seasons in Madrid and achieved 750,000 viewers. In Barcelona the forecast is good. “We have almost 50,000 tickets sold. The city is receptive. There is a great desire to consume culture and entertainment. After the covid you can see that people want to have fun. ”

The pre-adolescents and adolescents of ‘Billy Elliot’ have been searched in Catalonia. The veteran’s school has been in charge of his training Coco Comín, a dance expert who was part of the ‘boom’ of musicals in the 90s. She worked on the creation of montages such as ‘Memory’, ‘Chicago’ and ‘Grease’, among others. This season he returns with ‘Fame’, a montage that overflows with energy. It is the second time that Comín has directed and choreographed it after his first experience with him in 2004, when this musical first landed in Spain with a production in Catalan at the Tívoli in Barcelona which later, in Spanish, made a season in Madrid and toured throughout Spain. It was quite an event with 1,175 performances.

The 80s return with this musical, where in addition to discovering the leggings and leg warmers, everyone has been able to understand the meaning of the famous phrase: “Fame costs and this is where you are going to start paying for it, with sweat.” For Comín ‘Fama’ is already part of our culture. “Putting on a musical is a heroic act. The producers do it out of vocation. If you can get to pay the salary of the actors and cover the expenses, it is already a success,” confesses Comín. The key to his proposal is to make the viewer feel like a student again, seeing the hopes and challenges faced by the students of the Brooklyn School of Performing Arts. Some of them help put together the soundtrack by playing saxophone, drums, piano, violin and flute, something never seen in previous productions. And the music band, integrated into the scenography, is led by Pablo Salinas.

Some of the corps de ballet take on three main characters. “It has not been easy to find such capable people,” confesses the director. Except Dídac Flores, Miquel Malirach and Queralt Albinyana, there are not many familiar faces. The team has 16 Catalan artists, five from as many autonomous communities and many others from Argentina, Italy and Cuba.

“The main theme, ‘Fame’, has a disco air but the predominant style is pop-rock with nods to gospel and rap”, highlights the director, who has prepared a much more agile version than the one released 20 years ago. Also shorter: it lasts two hours and will not have an intermission. “Tickets are being sold”, says producer Enrique Salaberria, executive producer of the show together with Jordi Arqué, responsible for the new stage of the Apollo Theater where ‘Fame’ will premiere. 10,000 tickets have already been sold and the promotion has just started. “Many come from Zaragoza”, explains Salaberria. Barcelona once again takes positions as the capital of the musical.