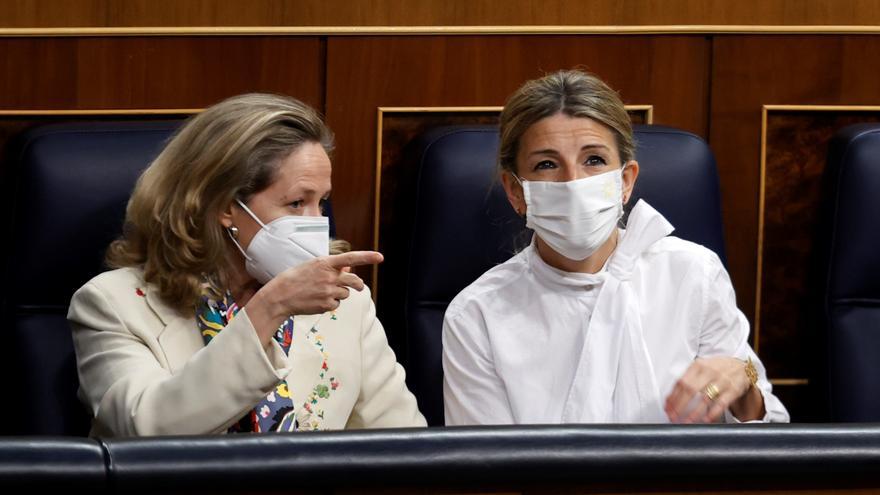 The latest increases in the Minimum Interprofessional Wage (SMI) have helped reduce inequality and working poverty. In the midst of the internal pulse in the Government coalition on the rise in the Minimum Wage, the Survey of Living Conditions corresponding to 2020 prepared by the National Institute of Statistics has come to shed light on the clear impact of this measure to improve the purchasing power of groups with less income. Thus, the data from the income survey reflect that the 22.3% rise in the SMI in 2019 reduced household income inequality and reduced the risk of working poverty.

Both the President of the Government, Pedro Sanchez, as the First Vice President of Economic Affairs and Digital Transition, Nadia calviño, have entrenched themselves in a Numantine position in the face of the rise of the SMI, with the excuse that "right now what is relevant is the creation of employment and the consolidation of economic growth." However, the data coming from the Social Security endorse the average affiliation in seasonally adjusted terms will grow by 150,000 workers during the month of July, which means thus surpass pre-crisis employment levels, reaching 19.41 million employed.

Opposite, the Minister of Labor and Social Economy, Yolanda Diaz, advocates raising the minimum wage in the face of inflation, which stood at 2.7% in June - "it is not too fair that we leave those who need it most, not frozen, but with a loss of purchasing power" , has wielded-, while the Secretary of State for Social Rights, Nacho Álvarez, recalled in an interview with this newspaper that "it is difficult to understand that, in a context where wages that are in the collective agreement grow by 1.5%, and the wages of public employees or pensions rise almost 1%, we leave unprotected to that million and a half workers who are out of collective bargaining. "

It is true, as Nadia Calviño affirms, that "this is the Government that has increased the SMI the most, 30%, it has no comparison with any other European country", but also that there is an agreement between the members of the Executive for the minimum wage reaches up to 60% of the median salary in this legislature. The committee of experts organized by the Ministry of Labor drew up an opinion in which they proposed an increase of between 1.3% to 2%, about 12 to 19 euros per month. Yolanda Díaz's proposal is for it to rise 0.9%, so that it would go from the current 950 euros per month (14 payments) to 958.5 euros.

But, what has been the impact on the quality of life of the main rise in the SMI? According to the Quality of Life Survey recently published by the INE, thanks to the 22.3% rise in the minimum wage in 2019, the median income per person reached the highest figure in the historical series, standing at 16,043 euros. Never before has this indicator increased by more than 1,000 euros compared to the previous year.

The median income indicates the income of the citizen who is in the middle of the distribution, it is right between the 50% who have more income and the other 50% with less income, while the average income is the quotient between all the production of a country and the number of inhabitants. Income in a society is not distributed equally for all its members, so that the average income is always higher than the median, but the latter gives a more accurate view of the real situation of the country's wage earners.

Another indicator that has also improved in 2019 is the Gini coefficient, which has dropped 1.1 points, standing at 32.1. The Gini coefficient marks the inequality that is most used internationally to measure the degree of differences that exist between the salaries of the population. Spain is one of the European states with the largest gaps between the salaries of the population, as indicated by this coefficient, although it has improved since 2014. The fall in this index to 32.1 places it at the lowest figure since 2007 , where a rise caused by the financial crisis began.

A similar trend is observed with other inequality indicators, such as the S80 / S20 ratio, -understood as the ratio between the 20% with the highest income and the 20% with the lowest income- which also experienced a reduction to 5.8 times, its lowest value since 2007, when in 2014 it had peaked at 6.9 times. Although this indicator has dropped, we are still above the level of the financial crisis, since in 2007 it was 5.6 times.

Another relevant data is that the rate of risk of poverty among the employed fell by 1.2 points to stand at 12%, the lowest value since 2012. As in other indicators, this figure falls more the year in which it rises the SMI by 22.3%, since since it began a downward curve in 2015 it had decreased by less than one percentage point each year.

When analyzing by demographic groups, we find that in 2019 the percentage of employed poor falls by 1.2% compared to the previous year, but it is also in the group aged 16 to 29 that the poverty rate is cut the most, by 3 , 2%, this group being one of the most exposed to receiving the minimum wage.

Faced with these data, the Bank of Spain pointed out in a report on the increase of the SMI in 2019 which caused a reduced negative effect compared to the total of 15.7 million wage earners, from 0.6% to 1.1%, which translated into some 94,200 to 172,700 fewer jobs in 2019. That year job creation reached about 400,000 people. The Bank of Spain states that the negative effect was reflected in a decrease in job creation, not so much in the destruction of existing jobs, and all the impact is concentrated in the group of workers with low wages.

The director of the economic cabinet of CCOO, Carlos Martín Urriza, pointed out in an article in elDiario.es about the analysis of the Bank of Spain that "now it is no longer talking about job losses but less job growth" and highlighted how "the Bank also points out that there are considerably more workers benefited by the increase, 1,570,000, than those affected by the increase. employment slowdown and that, therefore, a full analysis of the impact of the rise should also take into account aspects related to equity and living standards ".