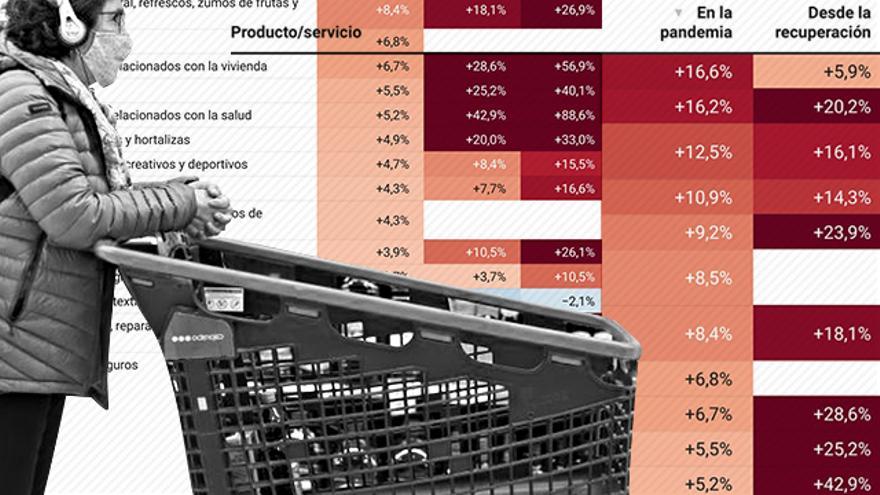 Electricity is 37% more expensive today than a year ago, according to the latest data from the INE. The escalation coincides with the arrival of the new electricity bill, which undoubtedly adds confusion to consumers, although the reason is in the rising cost of natural gas and speculation on the European CO2 stock market. Electricity is one of the products that have become more expensive since the pandemic began, according to the analysis prepared by elDiario.es comparing the latest available data (April 2021) with those prior to the coronavirus (January 2020).

Some of the products at the top of the table depend on the time of year, such as clothing or footwear, which are more expensive in spring and fall. Others, like bicycles, household items, or gardening items, get there for a unexpected increase in demand and due to the increase in the cost of transport (prices for transporting merchandise on ships have tripled since January 2020).

At the bottom of the table are tourist services: travel packages or flights, which inevitably fell in price as there were no tourists and await their return to go back up.

"In the coming months we will see very important step effects," says María Jesús Fernández, senior economist at Funcas. "The price of oil fell when the pandemic began and has now returned to previous levels. We must remember that last year at this time inflation was negative. This year, as we return to normal, we will see increases. But we understand that it will be transitory, that at the moment there are no underlying inflationary tensions ".

Fernández thus responds to the doubts about whether we are entering an era with the risk of inflation, large price increases and rising costs of living. In Spain, the CPI for May stood at 2.7%, the highest figure in the last four and a half years. It is true that the main cause is electricity - which, moreover, had just hit minimums a year ago (in April 2020 it fell by 20% compared to 2019) - and that the underlying CPI, from which the most volatiles, only increased 0.2%. But deep down there is a global fear.

In the Euro zone, the inflation rate reached 2%, reaching the threshold established by the European Central Bank, whose objective is to keep it always below. In Germany, it reached 2.5%. And in the United States, it rose 4.2% in April (underlying 3%).

"In Spain, 0.2% core inflation is nothing. The problem of how the rise in prices affects our pockets is very limited and different from what happens in the United States and Germany", explains Matilde Mas, professor of Economy and director of international projects at IVIE. "With the rise of the United States, people have started to get nervous. Why? Because much of that growth has had to do with aid for COVID. The stimuli are higher than those of the EU and there are those who believe that the economy is overheated. The stock market is staggering, because going above the 2% benchmark implies moving to a restrictive monetary policy, raising rates and slowing down expansion ".

An example of the inflationary overheating coming from the United States is that of the used car sale. Prices have risen 21% in one year because demand (people who do not want to use public transport for fear of the virus) is much higher than supply, weighed down by the global shortage of semiconductors.

The cost of raw materials has also increased around the world -the Bloomberg index that measures them is at its highest in the last five years- which in the long run translates into reduced margins for the food chain (producers, industries and distribution) or price increases for the consumer. We have seen it recently with milk: Spanish farmers demand 3 more cents per liter because soybeans and corn are more expensive today than a year ago. And the milk already has such tight margins that either it goes up on the shelf, or all the links will lose money.

Goldman Sachs expects the United States to end the year with an inflation rate of 2.7%. IG analysts said Thursday that "investors are still concerned about inflation data" and are trying to anticipate "when the market could start. tapering", the term with which the withdrawal of stimuli in the United States is known, that is: that the Federal Reserve reduces its purchase of public debt bonds.

That across the pond. In Europe, Mas continues, countries with disparate economies depend on the European Central Bank. "For Germany, inflation above 2% is a mortal sin. And the Bundesbank has predicted that it could rise to 4%. It translates what they think of the United States here," says the professor. "Germany can expect the ECB to return to a restrictive policy that would do a lot of damage to Spain and Italy. They would raise rates and we would talk about the risk premium again. That is the great risk and not the rise in energy. Although, except that win the right in Germany, I don't think the waters will reach that level. "

Inflation is the great enemy of public debt. If investors began to think that the rise was serious and for the long term - in economic jargon, if they will change their expectations- there would be "significant turbulence", continues Fernández. "If you have a fixed income security that gives you 0.5% profitability and inflation is set to 2%, the profitability is negative and you sell it. Certain growths end up being transferred to inflationary expectations and the ability of the States to place the debt ". And here Spain would lose out as it is one of the most indebted countries in Europe (120% of GDP).

The rise in the CPI in May in our country led Funcas to review your upward forecast for this 2021. Its analysts estimate that we will close the year at 2%. The increase in inflation implies an increase in pensions —and therefore, in public spending— and has effects on issues such as rents, which are also revised upwards. That the cost of living increases faster than wages rise causes a loss of purchasing power, which is why the Minister of Labor, Yolanda Díaz, advocates raising the minimum interprofessional wage (which is now at 950 euros).

The economists consulted believe, although in the coming months there will be rebounds in certain sectors - in tourism and hospitality, where demand may recover faster than supply because many bars have fallen by the wayside - current forecasts are not alarming.

"Yes, we expect it to be somewhat higher in the coming months and even to be above 2% for years," says Manuel Hidalgo, an economics professor at the Pablo de Olavide University. "But we come from a decade of very low rates. There is no need to be alarmed."

The high costs of electricity take, according to Hidalgo, to permeate the rest of the economy. House prices, on the other hand, follow different cycles. In the last quarter of 2020, the INE's house price index showed a large rise in new housing (8.2% year-on-year) compared to used housing (0.4%). "Banks have no clear interest in second-hand sellers selling, so they don't finance potential buyers under the same conditions as others," says real estate market expert Borja Mateo. "But since they have financed the builders, they do have an interest in those houses being sold. They are much more interested in selling first-hand apartments at a high price than second-hand. The rents are, according to the indexes of the real estate portals, going down.

"Inflation in Spain for now is normal. Or a small problem compared to what can happen," concludes Mas. "The lack of competition from power companies and the price of housing are problems that deserve to be analyzed, but from a broader perspective, it is German inflation and that of the United States that can have global consequences. And how we depend on what you say the ECB, our control capacity is minimal. "

Tags: be alarmed, effect, fan, ghosts, inflation, not, Old, step, there are, there will be, upturn