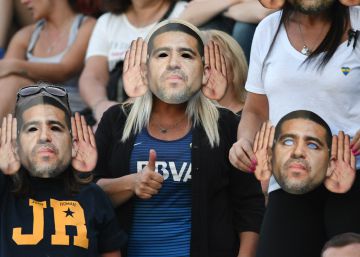 This story contains emotion, hope, anxiety and terror. But you have to start where everything starts (and ends): by power.

On December 13, 1995, Mauricio Macri, son of tycoon Franco Macri, won the elections and became president of Boca Juniors, the most popular club in Argentina. From Boca, Macri was weaving the connections and alliances that would allow him to reach the head of government of the city of Buenos Aires, first, and the presidency of the Republic later. Macri, now defeated, will give the leadership of the State to the Peronist Alberto Fernández on December 10. But first something very important will happen: on the 8th elections are held in Boca. And the candidate of the macrismo, Christian Gribaudo, does not have the victory assured. Boca Juniors could stop being the fief of Mauricio Macri and his friends.

Who threatens Macri's stronghold? The most respected man in the Bombonera, the man who has trodden his lawn the most times, the man who makes Maradona pale even: Juan roman riquelme.

Whoever did not see Riquelme play will hardly fully understand a fundamental principle of football: a player can remain almost motionless and get everything around him to turn at a dizzying speed. Riquelme, when passing or jogging, created kaleidoscopic figures with the ball.

Juan Román Riquelme has decided to support the opposition candidacy of Jorge Amor Ameal, a leader who started with Macri and over the years distanced himself from macrismo. If he wins, Jorge Amor Ameal will give Riquelme full powers over the sports management of the club. Riquelme declares himself willing to accept the challenge.

On Saturday, Boca and Argentinos Juniors played the first place in the table at the Bombonera. They tied at one goal and remained tied at the head of the Super League. The relevant, in any case, were the thousands and thousands of "bosteros" who came to the stadium with a mask of Riquelme. And the fact, significant, that Maradona renounced on this occasion the throne he has in the Bombonera, giving Riquelme, sitting in a box, all the prominence.

Riquelme has awakened the hope of much of the xeneize fans, afflicted by their recent defeats against River. Riquelme is a serious, honest and supportive guy. There are many in Boca who wish to deposit the sporting future of the institution in their hands.

But there are also those who are afraid of the possibility of Riquelme taking that risk. Some of his fans fear that the complete and inexperienced Juan Román drowned in the thick pond of political interests on which Boca Juniors floats. Others are horrified by the avalanche of criticism that will fall upon them from the dense network of audiovisual and written media that revolves around Boca and responds, very frequently, to more political interests than sports. Both are alarmed at the possibility of attending the destruction of the idol.

Others, headed by the ineffable Maradona, oppose the “Riquelme option” because they believe that whoever will suffer a degenerative process will be the institution. Maradona, sometimes a leftist and a macrist on this occasion, just pronounce a name: Passarella. Daniel Passarella was the great idol of River Plate, Boca's maximum rival. He was as a footballer and he was as a coach. Passarella came to preside over River. And as president he led the "millionaires" to the descent. After that catastrophe, which occurred on June 26, 2011, River's record was stained and Passarella's name was cursed.

The end of this story is yet to be written. Boca's future depends on its more than 200,000 members and, depending on the result, on Juan Román Riquelme.

That’s how De Ligt was bleeding after a head crash